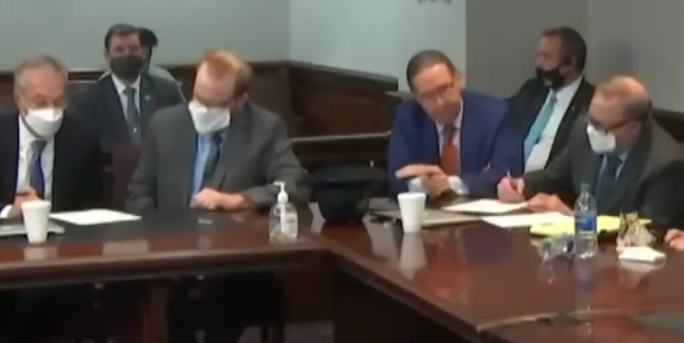 “Lawyers and legal scholars have not gone out of their way to make the law accessible to the ordinary person” wrote Jay Feinman in the opening to his Law 101 book. “Just the opposite: Legal professionals, like the priests of some obscure religion, too often try to keep the law mysterious and inaccessible.”

But sometimes the law as written down and the pressing circumstances of the moment bring even the most ignorant of perspectives to clarity.

“A person commits the offense of murder when he unlawfully and with malice aforethought, either express or implied, causes the death of another human being” is how the Georgia code defines what Travis McMichael was found guilty of and now is sentenced to life in prison without the possibility of parole for. “Express malice is that deliberate intention unlawfully to take the life of another human being which is manifested by external circumstances capable of proof. Malice shall be implied where no considerable provocation appears and where all the circumstances of the killing show an abandoned and malignant heart.” Though legalese can be hard even for the most knowledgeable attorney to parse through, the meaning here is plain enough. When it comes to the written Georgia law and the details of the Ahmaud Arbery murder, “abandon and malignant heart” describes Greg McMichael, Travis McMichael, and Roddie Bryan in perfectly understandable terms, glaringly demonstrated by their actions.

In the common vernacular, we talk of “malignant” mostly in reference to the despicable disease of cancer, how it spreads through a body, how it corrupts otherwise healthy cells and turns them again their own living interest to destroy, to wither, then kill. The disease that spread to the three men now held responsible for the murder of Ahmaud Arbery started in the heart of Greg McMichael, a festering seed of arrogance, self-importance, and hatred that spread to his son, and to friends like Roddie Bryan. As Judge Walmsley laid out in his statement before sentencing, the sequence of events that led to Ahmaud Arbery being dead and the McMichaels and Bryan going to prison for life didn’t happen in a vacuum; it happened in a sequence. A sequence that at every turn was escalated, perpetuated, and fueled by Greg McMichael’s seething hatred for someone he could not control doing something he did not approve of where Greg McMichael had decided he did not belong. Travis McMichael took Arbery’s life with a shotgun, but the murder of Ahmaud started in the abandoned and malignant heart of Greg McMichael who incubated his hatred and disregard for the law equally applied over a lifetime while passing it on to his son and others in his sphere of influence.

That parental, hereditary malignancy of hate doesn’t absolve or excuse Travis McMichael in the least. In his own defense Travis McMichael’s counsel highlighted his Coast Guard service including law enforcement training, thinking it would help his cause and argument, trying to paint himself a self-appointed — or father appointed — guardian of Satilla Shores. It also eliminates any excuse for his hatred, since the Coast Guard, like all the uniform services, trains, preaches, and demands respect for others and equal treatment and adherence to rules, laws, regulations, and standards. Travis McMichael sat through all that but decided the way of his father was deserving of his true faith and allegiance more so than the code of honor the uniform required. Regardless of the reasons or paths that got him there, Travis McMichael joined his father and Roddie Bryan in the 5 minute chase of Ahmaud Arbery. A chase that continued, in the description of the Georgia Bureau of Investigation Agent Richard Dial during pre-trial testimony, until “he couldn’t run anymore” and Travis McMichael killed him for the audacity of not obeying him. And then, at that point, the malignancy of hatred reached its peak as — according to Agent Dial’s sworn testimony of what Roddie Bryan witnessed — afterwards he let his abandoned heart become spoken word in referring to the now slain Ahmaud Arbery as “F******* N*****.

The state did not bring up the racial angle much in this trial, focusing mostly on the actions of the McMichaels and Bryan and less so on their motivations. While unsatisfying to observers who want a reckoning for their clear motivation of hatred and prejudice, legally it was smart, keeping the focus on the killing they were charged with and letting their own actions speak loudly as to the motivations that are obvious to anyone honestly assessing them. The McMichaels damned themselves — especially Travis on the witness stand — by their own words, own actions, own defenses, and mostly by their own lack of remorse. Tellingly, neither McMichael stood for their judgement. Roddie Bryan did, without being told to, and accepted his life sentence, with the difference of a possibility of parole the McMichaels will not have, as the judge noted Bryan’s remorse and cooperation. All three men face federal hate crime charges, a process in which such matters of racial animus will not only be included but be front and center.

Judge Walmsley made a point in his sentencing statement of how chilling some of the video images of the murder of Ahmaud Arbery were, the escalating rage of the McMichaels as they hunted Arbery down which  turned to stone cold indifference after slaying him openly, in broad daylight, for the audacious crime of not doing as he was told by men who had no right to control him. “It was callous, and it occurred — as far as the court is concerned based upon the evidence — because confrontation was being sought.” Confrontation they sought not out of the sense of justice or community, hollow words the McMichaels draped across their abandoned and malignant hearts to justify their lynching of Ahmaud Arbery, but because of lifetimes of deliberate decision making to hate their fellow man so much they would hunt him down for daring being in their neighborhood. And entrap him. And then kill him for not realizing and submitting to how great and mighty the McMichaels’ power over him was supposed to be.

The law can be inaccessible and confusing sometimes. The hatred men like the McMichaels fester in their hearts can be hard to understand by folks who are not utterly devoured by the othering of those different to elevate the importance of self. But what was done to Ahmaud Arbery was crystal clear, and why is apparent to all honest observers. Life in prison is a just verdict. But it falls short of justice. There is no justice this side of eternity for what the McMichaels did to Ahmaud Arbery. But it is the best we can do at the moment, and it’ll have to do.

May God forgive us for that.