I Didn’t Read Wheel of Time, But I Did Stay In A Holiday Inn Express Last Night 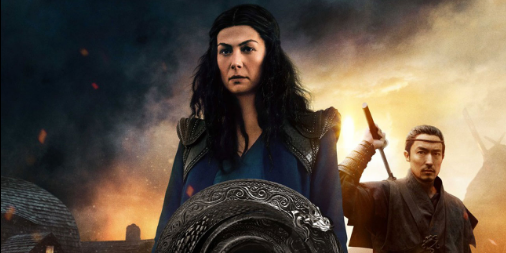 Promotional image for The Wheel of Time (Amazon)

I’m going to talk about (and mildly recommend) the television series. I’m probably going to wander into some spoilers territory. Be warned.

The first Wheel of Time book, Eye of the World, came out in 1990. I was in 11th grade. Wait, it came out in November? I was in my Senior year, then. Like, remember Ice Ice Baby? Yeah. That’s around the time that that first book came out. Jordan did a good job of coming out with three books the first year, then every year for a few years, then every other year for a few years, then the last two books came out over the next five years.

I remember my friends talking about Robert Jordan getting diagnosed with some awful disease (Cardiac amyloidosis) and, while expressing sympathy and regret, complaining that he kept introducing new characters and new plotlines in the book and wandering off and writing Conan books instead of finishing off Wheel of Time. Robert Jordan died in 2007. “That sucks”, my friends said, talking both about the death of a guy that they liked and the seeming end of the series that they loved.

And then, golly, Brandon Sanderson shows up and finishes the series. I’m told that he didn’t really tie off the loose ends as much as he took one of those old school Swingline guillotine paper cutters to them. This subplot? Kill the guy. That subplot? Kill the gal. This other subplot? Let’s have them kill each other. Easy peasy.

So they resolved all of the chords at the end of the song, it’s just that the song began with strings and a flute and woodwinds playing the chords and ended with Metallica electric guitars doing palm mutes.

But, you know, that’s better than not getting to the end of the song at all.

Given the success of Game of Thrones, it’s not surprising that a bunch of content farms said “We could do that!” and started making shows like The Shannara Chronicles or The Witcher or Legend of the Seeker or whatever. Some could… and others… well, I suppose it’s just as well that the folks out there haven’t found The Belgariad yet. Anyway, I was told to watch the first episode and got invited over to a friend’s who said he was going to make me watch it and…

Well, it wasn’t *BAD*. We get introduced to a bunch of characters and they hammer out the various archetypes… this one is the one that married early and settled down. That one is the rogue who loses all his spending cash gambling but does a good job of taking care of his sisters despite their parents. That other one is the one who was given a choice between taking a husband and taking a role as healer and chose the role of healer… and that last one there is the would-be husband who otherwise doesn’t have a personality and is therefore The Dragon Reborn.

And so we spend the next six episodes doing world building and relationship building and learning that Red Aes Sedai don’t have warders but Green Aes Sedai have them and, golly, do they ever! We see swords with herons on them, we see Trollocs (NOT TROLLS) and Ogiers (NOT OGRES), and watch a lot of channeling. And then, at the end of the season, we get Episode 8. I know that my friends who read the books watched the show and sat up and pointed at the screen yelling “OOOH! OOOH!” whenever one of those swords showed up or when the wolf licked Perrin’s leg or when Egwene al’Vere has her braid done. And so they were excited to see what stuff actually looked like and were able to say “I didn’t imagine Valda looking like that but, man, they got his charismatic smile down *FLAT*.”

I have complaints about Episode 8. I mean, I have seen plans in the real world that suffer from being severely under funded and having little-to-no managerial support but, jeez, normally people who are telling stories can at least have their characters sit down at a campfire and, you know, *TALK* for 4-5 pages about what the plan is. Seriously, I left that episode thinking “holy cow, this wise architect of the fight against the bad guys might not, in fact, be an amazing tactical leader after all”. Maybe that was the point, though. We’ll see what happens in Season 2.

I suppose that’s the same complaint that I have about the whole series. The first book itself was a darn doorstop. It introduced dozens of characters and set up a lot of little things about the world for us to poke and prod and explore and the series had 8 episodes. Which scenes are essential? Which scenes can do you without? And, lemme tell ya, if everybody on the team has read the books, you’re left with people who don’t know that people like me on the outside will be saying stuff like “What’s the deal with the knife? I mean, I get that it’s a *BAD* knife… but, seriously, what’s the deal with the knife?”

I’m looking forward to Season 2, I guess. Maybe I’ll actually learn some stuff about what’s going on instead of just recognizing that “man, people who read the books are probably *LOVING* this stuff right now.”