A COVID Statistic That is Beyond Meaningless 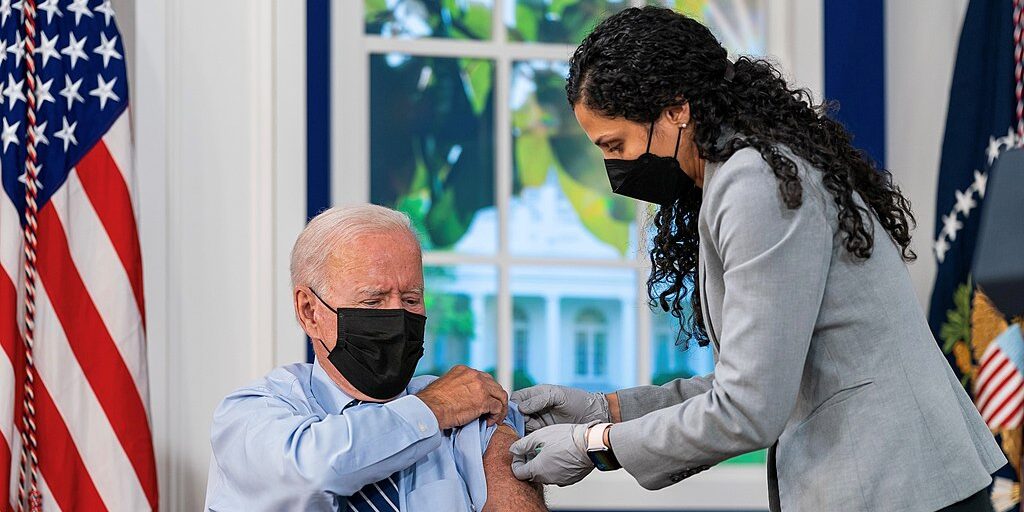 President Biden takes a COVID-19 booster shot. Office of the President of the United States, Public domain, via Wikimedia Commons

Under Joe Biden, more people died WITH Covid in 2021 than 2020, in spite of THREE vaccines that weren’t available in 2020 and FIVE (bogus) vaccine mandates issued by Joe Biden in 2021.https://t.co/YK1IzbjhVi

The Wall Street Journal also got the memo:

Covid deaths this year have now surpassed the toll in 2020 with 350,000 since Inauguration Day. It would seem that Mr. Biden has done no better than Donald Trump in defeating Covid despite the benefit of vaccines, better therapies, and more clinical experience. The left politicized Covid by holding Mr. Trump responsible for a disease that was always going to be hard to defeat.

As has National Review.

This is a family site so I will refrain from the explosion of expletives I would like to unleash on this. But let’s just say that this statistic is incredibly deceptive. Even if weren’t, it would be utterly meaningless. And even if it were not meaningless, coming as it does from Republicans, it is an offensive end-zone celebration of their own destructive polices and the body count it has piled up.

Let’s break it down.

There have not, in fact, been more COVID-19 deaths under Joe Biden than under Donald Trump. Eventually, we will probably pass that grim milestone. But at the present rate of death, that will not happen for another 2-3 months. What they have done is compared 2021 deaths to 2020. But Joe Biden has not been President for the entirety of 2020. He took office on January 20th. 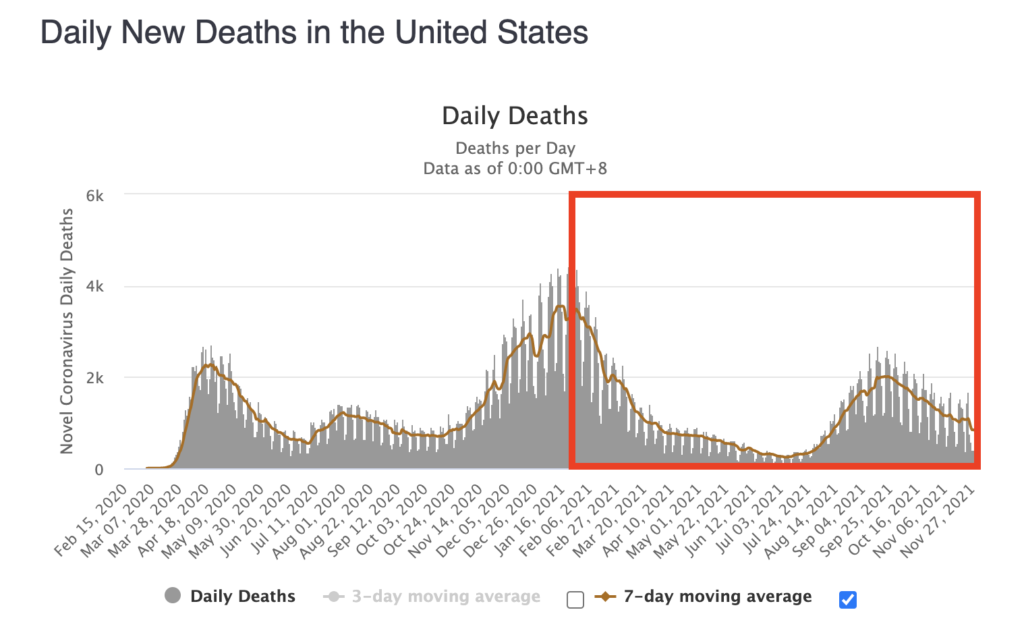 And that matters because of the second point. When Joe Biden came into office, we were literally right at the peak of the winter wave of infections that began in the fall of 2020 shortly after Donald Trump resumed rallies and hosted a super spreader event in the White House. Of the nearly 400,000 who have died since January 20, nearly half were in the tail of that wave. I don’t know anyone on Earth who expected COVID-19 deaths to suddenly drop to zero the day Biden came into office.

But now you see both the dishonesty and the meaninglessness of this stat. During the first three weeks of January, we were having the equivalent of a 9/11 every day. By counting deaths from January 1 to January 20 in Biden’s “column” instead of Trump’s, these weasels are able to shift a whopping 60,000 deaths in the blame game.1

Now, has Joe Biden’s response to the pandemic been perfect? Of course not. But it’s been better than Trump’s. We’ve put actual scientists back into advisory positions and listened to their advice. Biden hasn’t run out and started telling people not to fear the virus or mocked anyone for wearing a mask. He’s enacted a vaccine mandate which has caused vaccinations to resurge over the last few months. There are criticisms I would lob: elites not wearing masks and going to social events while the rest of us are supposed to follow the rules is a big problem. But having an Administration that can stay on message — even if that message is sometimes garbled — has been an improvement.

And I would say that, up until mid-summer, the results spoke for themselves. Vaccinations rates have been decent, if not great. And by July, it was looking like the pandemic was fading. But then two things happened.

First, the delta variant emerged. This variant was massively more infectious than the dominant 2020 variant. And it began to wreak havoc in unvaccinated populations. Even now, as the wave recedes from its breakout in Southern states and washes over the rest of the country, we are looking largely at a pandemic of the unvaccinated.

But the second point is why this blame game with Biden crosses me as so offensive. Because as the winter wave receded, Republicans made a choice. They decided that they were going to oppose almost all pandemic mitigations. With governors in Florida, Mississippi, Alabama and Texas leading the way, they banned masks in schools. They refused to enact any social distancing measures. They screamed that vaccine mandates were unconstitutional and filed lawsuits until they found a partisan court that would side with them. And almost all of the anti-vaxx hysteria and lies have been on the Right wing.

The WSJ editorial, in particular, is a giant rotten load of hypocritical nonsense. They blame the “left” for politicizing the pandemic. But that elides that, when this pandemic began, there was broad agreement on what needed to be done. It was Republicans who decided to turn on masks and vaccine mandates for political gain. It was Trump who started tweeting out things like “Liberate Michigan!” and mocking his opponent for wearing a mask. It is Republicans calling for the head of Anthony Fauci and anyone else who says thing they don’t want to hear. Moreover, the WSJ editorial page itself has run full op-eds on hair-brained lab leak conspiracy theories. They have run numerous op-eds supporting the Great Barrington nonsense, including anti-vax editorials from the GBD authors themselves. And they want to blame Biden for the new surge? Give me a break.

Now, I don’t think the Republicans intended to kill people. I think they figured that the stunning success of the vaccines meant they could have their cake and eat it too — scream about how mask and vaccine mandates were tyranny while masks and vaccines made the virus fade away. The receding wave meant they could pontificate and fundraise and portray Democrats as evil without consequence. But they didn’t count on an explosive variant emerging that would ravage their own communities. Even now, as the variant moves into bluer states, it is still strongly tracing the red-blue divide at the county level. Michigan, for example, is seeing caseloads not seen in a year2. But those cases are heavily concentrated in areas with low vaccination rates. And also, not coincidentally, areas that supported Trump in 2020.

In short, while it may not have been their intention, the Republicans have done everything they could to make the pandemic worse. And now they want to blame Joe Biden for it. Seen in this light, the recent spate of “Biden’s killed more than Trump” op-eds and tweets is not a lament.