Giving Thanks for the American Bacchanal 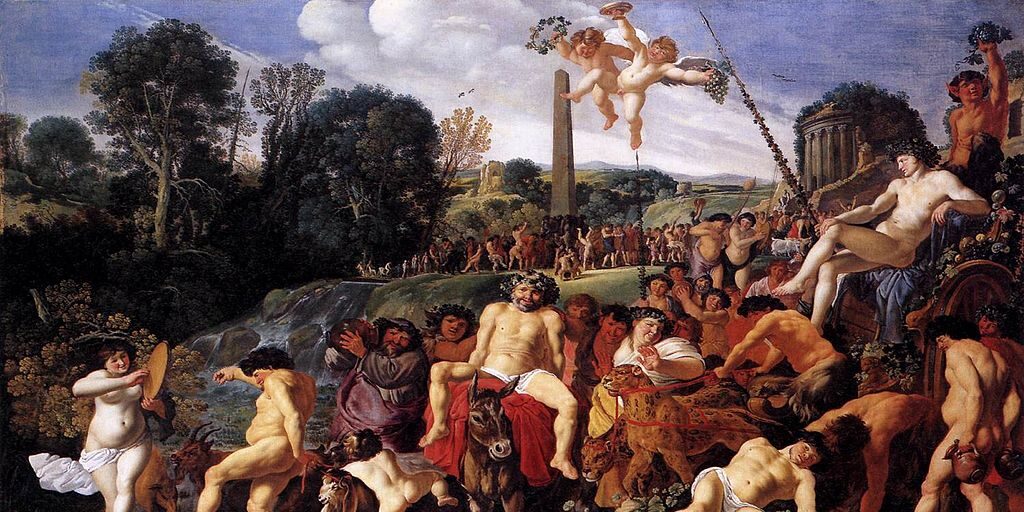 As we prepare for the inauguration of the six-week American bacchanal, running over children and old ladies for the last bottle of brandy to pour over the last bag of off-brand cranberries (which may or may not have been opened and sampled by someone’s kid a few days ago), exulting in grabbing the last of the locally-produced creamer from the confused hipster, cultivating high elation in wrestling away the last sack of small white potatoes from the mother of three pre-schoolers while she wasn’t looking, and then complaining about the hopelessly broken supply chain—speaking of chains, I’ve lost my train of thought here. What a morning!

As we prepare for Thanksgiving, that most uniquely American celebration, I note that we’ve got plenty to be thankful for. In days yore, one gave thanks to his carved idol for delivering some of the crops for harvesting, in spite of blight, that one hailstorm, and the death of a child or two, who are useful for working the ground, and also for steering the raiding parties just south of the homestead, to take the route on the other side of the ridge to the homesteads and the village there, which they pillaged, raped and burned down instead of yours. On the other hand, when that raiding party appears, menacing, one has just enough time to make peace with his carved idol. I’m looking at you, Jobu.

We’ve had some neighborhoods burn down recently, but nothing on the scale of existence in the barbarous lands of this world. Thus, the telling of the history of our bacchanal is connected to the former scenario, when the Pilgrims managed to survive a winter and establish on the North American continent a settlement of people who had a peculiar worldview. They gave thanks, it is said, to God, for surviving a year and bringing in some of the crops as a harvest; they probably killed a deer and had some venison, too, along with their farm-fresh turkeys and corn stuffing with candied yams and cranberry jelly.

As Thanksgiving became established in the middle of the 20th Century when Bing Crosby tried to record a song for it, the thing became about more than survival; it became about abundance. And I must say, as I scroll through my Twitter feed and find it populated by the unhappy warrior, the unpleasant psychopath, and the unclean, I give thanks to my God that that’s just about the worst part of my life in the American experience. I will gather my family around the table, as Norman Rockwell intended, to feast upon abundance, and sometime Thanksgiving evening during the dregs of the Beaujolais Nouveau or Friday morning in the dull headache thereof, I will drop a packet on material goods, some of which will be durable, to prime the pump for the American pantheon: sales, economy, and tinsel, among other lesser gods.

Nevertheless, my conscience will be pricked—and this is the bane of the Christian religion: Christians have been set free from the demands of an angry local storm god, so how do they live? Like penitent do-gooders? Ha! No, we live like unfettered pigs, rooting the ground for every morsel of material pleasure known to man and lusted for by demons, but with pricked consciences nonetheless—mine will be pricked as I gather my things close to my heart, that I am preparing to celebrate the birth of my God to the Virgin Mary into abject poverty, in whatever way that works—not scientifically, I assure you, and I will not wonder that the atheist shakes his head at me and my ilk.

Can you imagine what unfettered freedom would be like without pricked consciences?

I will wonder instead that we have not been vomited off this land and from among its people whose precepts it fulfills, which is all the more reason to give thanks.

I wonder if the atheist might also offer up a prayer to the God of America, if only to fulfill the aesthetic of it, to thank him that an unfettered people can have a measure of repentance, enough to give them pause that there are consequences, if not in the next world, then at least in this closed world laboring under the sun, that many Americans are thanking a supreme being for being kindly and gracious to them for no particular reason at all, that this supreme being has bestowed unfettered freedom as a gift, whatever the consequences may be. There is a certain humility required for us to do that for a few seconds before diving into the gravy boat.

It is, after all, the rhythm of a godless cosmos that a raiding party is steering itself in some direction, just over the other side of that ridge.