I have a feeling whenever I set out on a long journey that really and secretly I’m setting out to meet myself. Everywhere else seems to be well-charted territory now. Once we fully mapped the surface of the globe (not to mention Google mapped it) what else was there is heaven and earth to dream of in our philosophy? If we’re not going to discover anything new out there, maybe we’ll discover something new about ourselves in here- by going out there: tourism as a psychological experiment, run by the same sort of lab technicians in a highly-controlled environment.

But how did it get this way? You’ll excuse me for asking: this is a research question that hasn’t let me go since grad school. And tourism really is a strange practice: a heightened and theatricalized experience of place that turns the world into an exhibit, which is probably why we all pretend not to take part in it. It’s an industry that accounts for about 10% of global GDP, so this is unlikely to be true. But, we’re all travelers; only other people are tourists.

The weird moralism of this actually predates modern tourism. It’s a commonplace to put the predecessor of tourism in the “Grand Tour” of the European continent frequently made by well-born sons of the rising industrialist class in 18th century England, but the fig leaf there was that wealthy parents sent their sons to gain “knowledge and improvements,” which structured their travels around Venice and Rome, studying art and ruins. These lads were going to rule anyway, it was assumed; they might as well have culture and character to guide them.

So it’s a bit sweet to hear it was a churchman who pulled off the fig leaf; Laurence Sterne was an ordained priest collated to the vicarage of Sutton-on-the-forest, Yorkshire. Sterne had already made something of a name for himself, although not necessarily a good one, with his funny, digressive, bawdy and playful “biography” of the “gentlemen” Tristram Shandy; a book so digressive, in fact, it’s thought to prefigure the stream-of-consciousness style of Modernism. One of the supporting characters in the novel is Sterne’s alter-ego Yorick, who narrates his 1768 novel A Sentimental Journey Through France and Italy, and this is the book that changed travel writing in Europe.

In many ways, the novel (which was never really finished as Sterne died right after the first two volumes appeared, so his narrator never really travels to Italy) reads like a parody of travel writing. Yorick travels through France and the sections are named after places he went, but rather than inform the reader about the sites of the place and its history, he often launches into rambling stories about cultural mistakes he made or young women he was smitten with, usually fruitlessly. There’s a general air of pleasure and frivolity that was usually lacking from this type of writing. While Sterne tells us that “Fancy,” something we might better call Imagination, is a “seduced and seducing slut” who beguiles us “with thy pictures and images, yet with so many charms,” he is as powerless over her as any other female, or daydream. He is a dreamer at home and abroad.

“Sweet pliability of man’s soul,” he tells us, “that it can at once surrender itself to illusions.” One of the pleasures of tourism is it gives us a chance to daydream and dawdle, which we seldom get enough of at home. 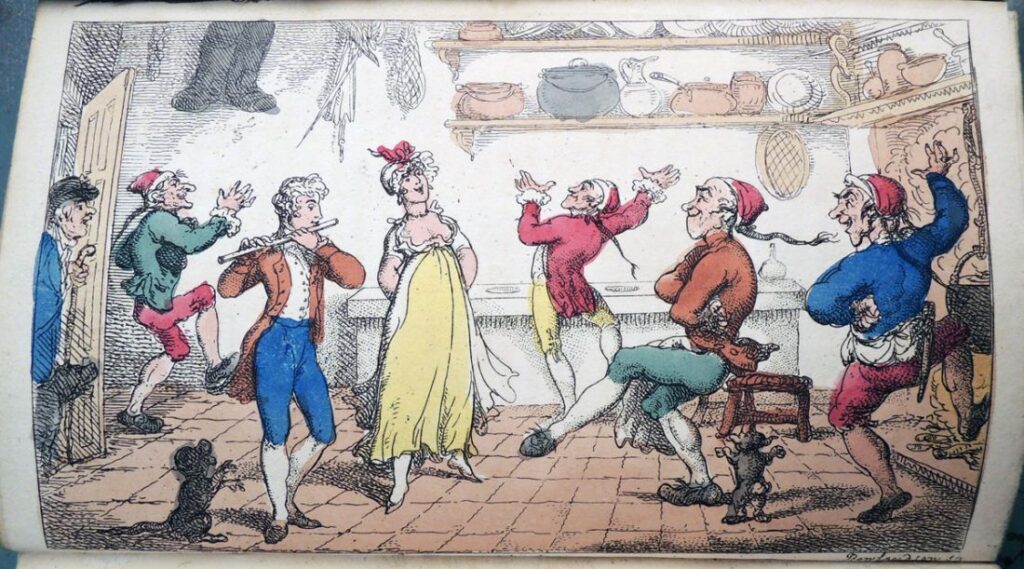 Artist: Thomas Rowlandson, from an 1809 edition.

In a sense, Sterne’s is a non-materialist vision of travel; he charts the effects it has on his soul more than he records raw facts. In fact, this is an intentional critique of materialism. When he finds himself fully at peace in this foreign place, he tells us:

“I felt every vessel in my frame dilate- the arteries bead all cheerily together, and ever power which sustained life, performed it would so little friction, that t’would have confounded the most physical precieuse in France: with all her materialism, she could scarce have called me a machine.”

He’s ripping on La Mattrie’s materialist tract “Man: a Machine” here and the sort of physical preciuse– we’d probably just call them “hipsters”- who espoused these ideas. He’s making a claim for metaphysics: the pleasures of travel remind us that we have a soul.

Travel, he reminds the reader, is also just good for us. Being around so many different people and customs “taught us mutual toleration; and mutual toleration… taught us love.” It revives our spirit and revitalizes our senses. It is, in itself, pleasurable, which strange to think, was not a commonplace at the time. When he visited Italy, Goethe kept giving himself homework to do! But Sterne’s real target was Tobias Smollett, whose travel writing on France and Italy criticized and found fault with just about everything different and strange that he encountered. We’ve all met the type! Sterne parodies Smollett with a churlish character named Smelfungus, which still makes me laugh. He finally reminds us of the real reason we travel:

What a large volume of adventures may be grasped within this little span of life by him who interests his heart in every thing, and who, having eyes to see, what time and chance are perpetually holding out to him, as he journeyeth on his way, misses nothing he can fairly lay his hands on- (And if nothing comes of it)- ’tis enough- the pleasure of the experiment has kept the best part of my blood awake & laid the gross to sleep. 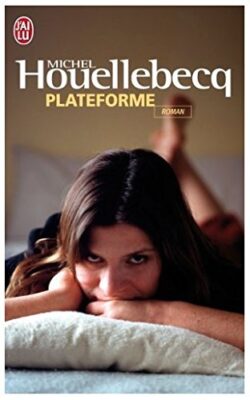 It’s safe to say that Sterne would not have enjoyed travelling with Michel Houellebecq. I also read the French enfant terrible’s 2001 novel Platform, which deals with modern tourism, and rhapsodizes about sex tourism, although this is perhaps a gambit to rile the reader, which is  Houellebecq’s stock in trade. Like his predecessor H.P. Lovecraft, Houellebecq is seemingly disgusted by everything in the world around him: tourism bores its participants into a stupor; sex is a mass-obsession that has had the pleasure intellectualized out of it; white collar life sets up the insipid in lifelong sinecures; love in Europe is impossible; the continent in general has lost all sense of the heroic or meaningful; infants are repulsive; Islam is stupid; neoliberalism’s market fixation has flattened out all our experiences into tradable commodities; and, let’s face it: our only chances at meaningful connection now are through prostitution and terrorism.

It’s strange to think that Gustave Flaubert was just as dour and just as depressed, and just as much an enthusiastic devotee of sex tourism, yet remains one of the greatest novelists of all time; while Houellebecq comes off as a drunken pulp fiction writer with waaaaay too much to tell us about the problems with “society today.” Part of it is that Flaubert wasn’t looking to make any thesis statements at all, famously writing that, as soon as we “prove” something, we lie. Houellebecq, on the other hand, has an opinion about fishing everything, some biting critique of all aspects of the hated modern world. Like Lovecraft, or even Céline, those other epic haters, his racism is really a subset of his larger disgust about other people and life in general. Thing is, when you dump on everything, you get lucky by being right as often as not. For instance, his idea that modern European men don’t offer much to European women as partners, so they might as well persue the Thai prostitutes who are just happy with a stable husband who comes home every night, has…. some merit to it. Some of his punches do land.

But, at roughly 260 pages, it’s a bit like hearing about a voyage from someone who tells you how bad the food was. Life might not be a continuous adventure, but it’s not a drawn-out misery either. If anything, it’s one long exile with a lot of time to fill. What I believe Sterne expressed, long before it became a cliche of the genre, is that “traveling” is not so much a practice as a way of being-in-the-world. Houellebeqc would rather be elsewhere.

So, fellow travelers, what are YOU reading, playing, pondering, creating, watching, or sightseeing this weekend?