I’m always a little surprised that more good tabletop board games haven’t made the transition from 3D to 2D. Most of the rules are simple enough that decent players follow a bunch of ranked “if -> then” statements in their heads when they look out at their own setup and the setup of their opponents. Surely those could be translated to a Perl script, right?

Well, okay, yeah. I know it’s more complicated than that but there are a *LOT* of things that go into weighing “should I go this way or that way?” on any given game board and figuring out “should I give myself points or mess with my neighbor’s ability to get points” is as much an art as it is a science. But, as arts go, it’s one of the ones that can be imperfectly impersonated by “craft” and, hey, you can write a script for that.

Well, the good news is that Roll for the Galaxy is one of the games that has successfully transitioned from the tabletop to the desktop. It’s available on Steam for $15 (or you can get the in-person version from Amazon for $52).

Now this is a *FUN* game to play with your friends on a Saturday night in a basement but if you’re still wary about sitting in a room with people who are laughing loudly or shouting at the dang dice rolling incorrectly for the third turn in a row, the computer game captures the mechanics and captures them well (and you can play against other humans online as well).

The rules are a little bit complicated (and, seriously, the first time I played the game, I was *LOST*) but, after a session or two, I have found my feet and this is one of my faves now.

The gist of the game is simple. You’ve heard of deck-builders, yes? Well, this is a dice-builder. You start with a basic number of three white dice, you start with a home base (that gives unique bonuses) and a home planet (that gives unique bonuses) and it’s you against the other folks at the table in a race to get the most points and the counter is when someone at the table collects 10 planets (on top of the one you start with). Now, in most of these games, the game plays by everyone taking turns by going around the table. In this game, the turns happen simultaneously (but, yes, you figure out what happened by going around the table simultaneously).

Your basic white die has six sides that have 2 explore, 1 develop, 1 settle, 1 produce, and 1 ship. (There are other die… blue, green, yellow, brown, purple… and they have different assignments including “wild card” that counts as whatever you want.) And, after you roll, you place either what you rolled *OR* you can sacrifice one die to place a second die wherever you want.

But, and here’s where the tactics come in, you can only guarantee *ONE* of the five phases. So let’s say you roll five die and come up with one of each of the phases with them… you have to figure out which one you absolutely, positively need to have happen and place your die in the “Guarantee This Particular Phase” spot… and assign the rest of your dice accordingly.

So let’s assume you have five dice and get one of each. If you think something like “I absolutely positively *NEED* money this turn!”, you want to guarantee explorer happens. And, heck, sacrifice two of your other phases… one die goes in the sacrifice slot, the other goes in explorer as well. And put the other two in your second or third most desired phases. Then, everyone else at the table reveals their guaranteed phase.

If everyone else picks Explorer? Well, you get to assign your explorer dice and that’s the only phase that happens this turn. Hard cheese if you wanted others.

But if Player 2 picked Develop and Player 3 picked Settle and Player 4 picked Produce? Well, heck. You get to play all four of those phases! (Well, the ones that have die assigned to them, anyway.) Unused die go back in your cup. Used die go back into your “population” only to be added to your cup if you have the currency to move them. If you have $0, you go up to $1 next turn so you’re never absolutely broke… but you are likely to find yourself in want of funds an awful lot in this game.

The explorer phase gives you the option of using a die and picking $2 funds or picking a new tile that has a Building Development on one side or a Settleable World on the other. Do you want the $2? Or would you rather have the tile? (And if you want the tile, which side do you want?)

The Producer phase lets you place a die on the production planets that can hold them. Place a die on a blue world, a green world, a brown world, or a yellow world. This makes it ripe for the pickings.

As you can see above, a round in which you can place a die on the production planet and pick it back up in the shipping phase can be quite lucrative… but the problem is that you can only guarantee *ONE* of these phases. (And if you don’t have a world suitable for placing a producing die… well, you’d best develop one!)

If all this is confusing, let’s go through a round.

Okay. We get our home base and home world. 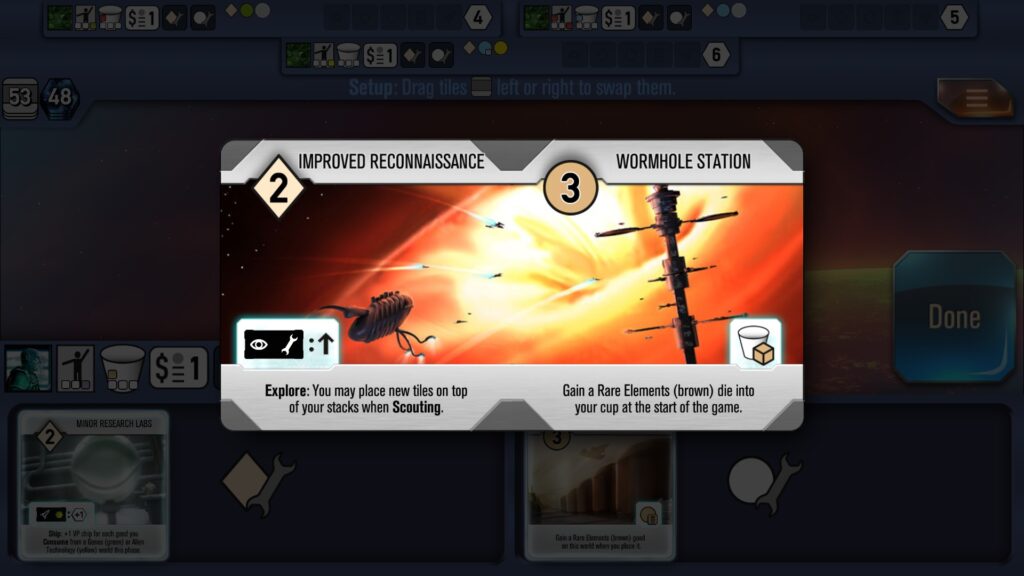 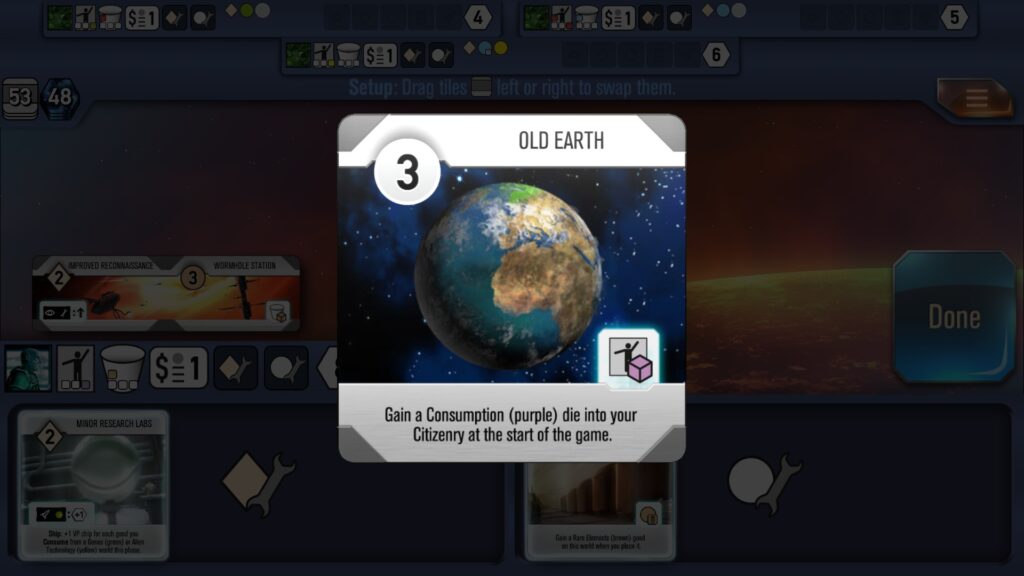 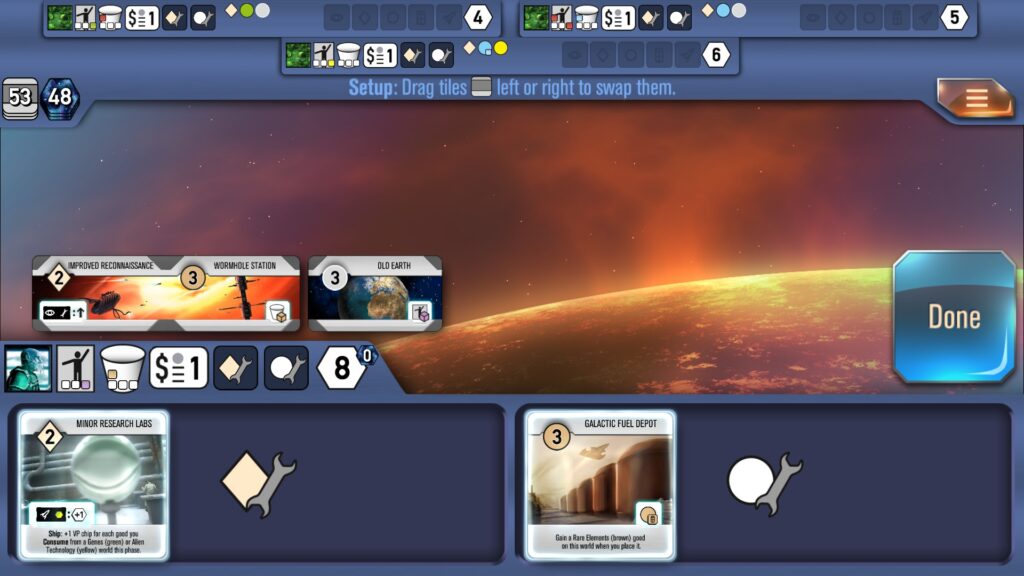 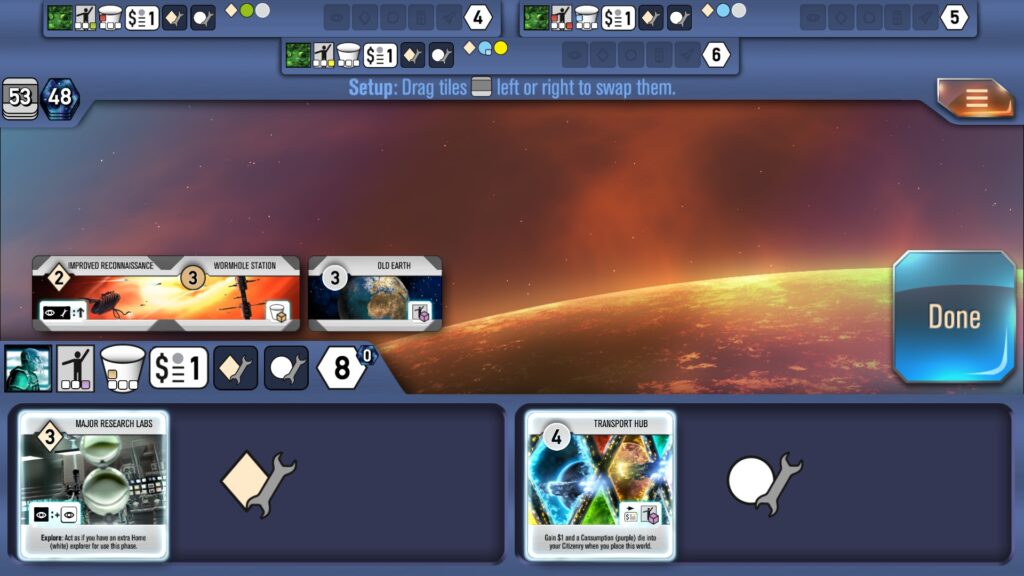 Generally, the choice is between “do you want a cheap starting pair that won’t take long to build or do you want an expensive one that will give a benefit that you’ll use through the game?”

Only you can answer that but I’m going to go with the one that will give us a world with a brown production planet.

Okay. Looks like our starting pair has done us a solid and let us put a brown die in our cup and a purple die in our population (to move a die from population to our cup will cost us $1).

So let’s have our first roll (with four dice… our starting 3 white dice and the brown one given us from our home base): 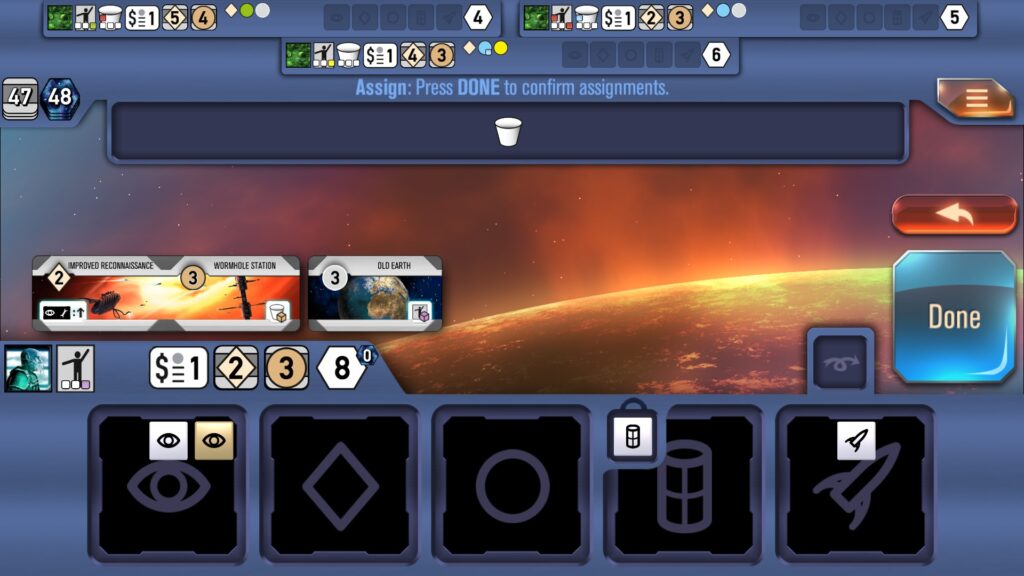 And now we have the following: two dice that came up with exploration, one production, one shipping.

Which of the phases do we absolutely positively want to have happen?

We have locked in Produce. Now we all announce our reveal and… 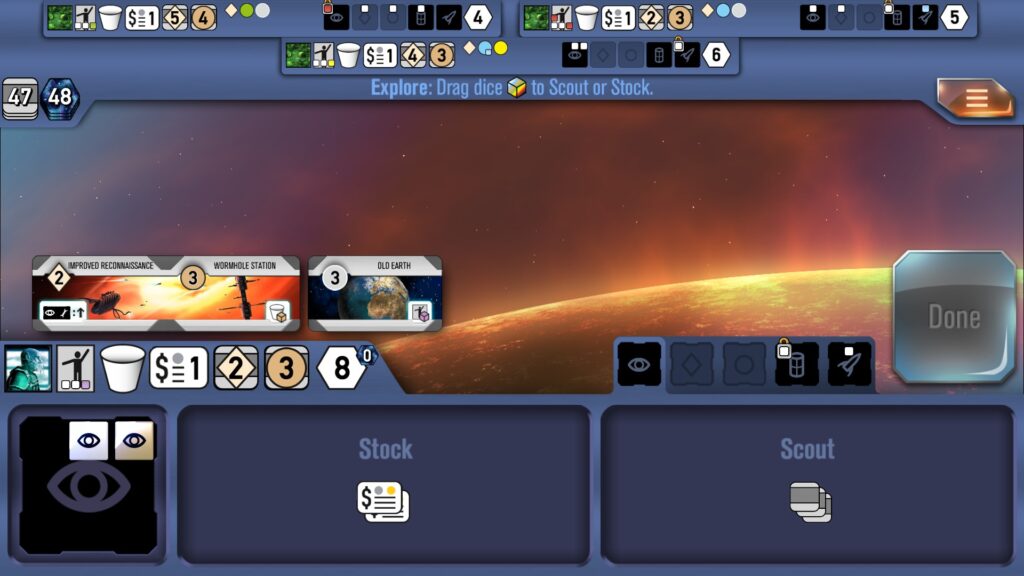 Nailed it! Our opponents have picked Explore, Produce, and Ship. Our pick of Produce is a little redundant, I guess, but it’s not like we had any other dice to place.

So, for our explore phase, we get to choose between Stock (which gives us $2) or Scout (which gives us a tile to place on the bottom of either our Develop or Settle stacks). At this point, we benefit from money more than tiles so let’s put both of our dice in Stock and get $4, place our white die on our home base…

And then pick up our resource and choose between getting another $4 vs. getting a victory point. 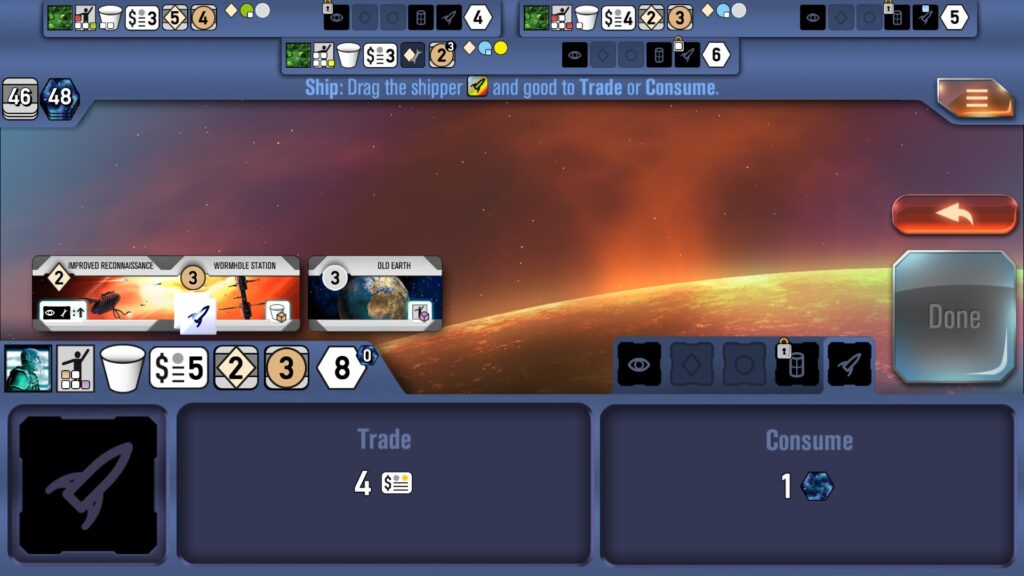 And there it is. That’s a round.

Now we spend our money moving dice from our population back into our cup and do round #2.

The game continues until someone builds their ninth Development/Settlement at which point it is announced that the game is over. Everybody finishes their turns, everybody counts up their victory points (add up the numbers on the Development/Settlements and adds them to their victory points they earned in the various rounds) and the most VPs is the winner.

The game is confusing the first couple of times but, seriously, once you get the rhythm of the rounds down? You’ll be wanting to get the tabletop version for your gaming group.

Tags: Roll for the Galaxy