The Lincoln Project Takes a Trip to the Theater 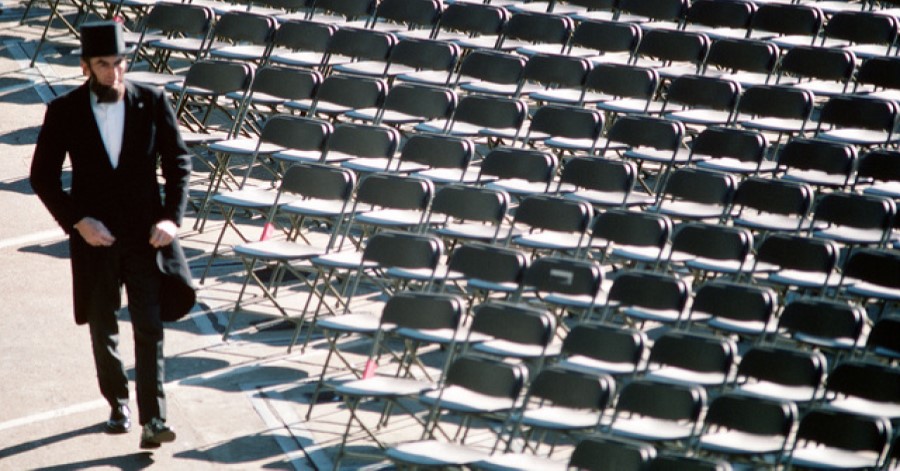 An actor portraying Lincoln at the commishing of the namesake USS Abraham Lincoln. US Navy Photo [public domain]

I don’t usually open a post this way but What. The. Actual. Hell:

A group of people carrying tiki torches outside Virginia Republican gubernatorial candidate Glenn Youngkin’s tour bus in Charlottesville on Friday, which caused a stir on social media and led both political parties to blame the other for the stunt, turned out to be organized by the Lincoln Project, an anti-Trump Republican group.

The event — a reference to the 2017 Unite the Right rally, when hundreds of white supremacists descended on the city with tiki torches — was organized by the group, which opposes Youngkin, as a “way of reminding Virginians what happened in Charlottesville four years ago, the Republican Party’s embrace of those values, and Glenn Youngkin’s failure to condemn it,” it said in a statement late Friday, after observers were left pondering for hours who was behind the stunt.

It was fairly obvious these guys weren’t actual white supremacists — one of them was black. And internet users quickly identified another as a Democratic operative. The Lincoln Project then claimed responsibility — almost like a terrorist organization claiming responsibility for an attack. The McAuliffe campaign denounced it and denied any coordination with the group. Some Republicans think this was a stunt organized by Democrats and The Lincoln Project is falling on the sword for them, an assumption that sounds reasonable until you remember who the Lincoln Project guys are.

The Lincoln Project is ostensibly a political action committee to rally anti-Trump Republicans in opposition to him. Over the course of the two years they’ve been running, they’ve raked in a cool $90 million dollars in contributions, run a bunch of political ads and provoked irate responses from Trump. They’ve drawn praise from people like Jen Rubin and James Carville.

But from the very beginning, I distrusted The Lincoln Project. Their leaders were former Republican operatives who were fine stoking resentment and anger when it benefited them. But when Trump elbowed them out, stole the playbooks and brought the politics of resentment to its logical conclusion, they maintained their relevance by turning on him.

And frankly, The Lincoln Project crossed me as a grift from the very beginning. They put together some snazzy ads and got Trump riled up. But there’s no evidence that this moved a single vote. They showed no interest in the kind of get-out-the-vote efforts that really make a difference in elections. They seemed to think that getting lots retweets and donations was enough. And, since the election, they’ve been beset with accusations of sexual misconduct and channeling their funds into firms owned by the members themselves. When you get people on the right, left and center to all denounce your organization as a grift … well, maybe there’s something to the label.

Their latest stunt, though, is beyond the pale. I’ll admit up front … this is somewhat personal to me. I spent six of the better years of my life in Charlottesville. It is one of my favorite places on Earth and I always stop there if I’m driving through to Georgia or the Carolinas. When the Unite the Right rally hit and Heather Heyer was murdered, it broke my heart. I saw white supremacists march on the grounds where I got my PhD. I watched them turn the Downtown Mall where I went on my first date with my future wife into a war zone. The streets where I drunkly stumbled home with my fellow graduate students were host to people screaming Nazi slogans. It was infuriating.

For an outfit like the Lincoln Project to pull a stunt like this, evoking the memories of that awful day for a political prank, is appalling. For them to feed the narrative (the false narrative) that the surge in white supremacy and the rise in Trump-related political violence is a false flag is disgraceful. And anyone with two brain cells together should have seen it would backfire.

I’m not a fan of Terry McAuliffe. He’s just one more moldy fruit from the rotten Clinton political tree. But if Youngkin is elected, the GOP is going to get even worse. They will be convinced that the path to victory lies in Culture War garbage like banning books from schools and attacking “critical race theory”. GOP politics will get even more toxic, more dysfunctional and more damaging on a national level.1

I don’t know that this stunt will make any difference. I suspect it’s mostly an online thing and no one will actually be convinced. But it doesn’t help. And it’s another reminder that The Lincoln Project was a grift, has always been a grift, always will be a grift. The sooner The Lincoln Project is banished from the political discourse, the better.