All The Feelz: Photo Of The Year Winner

A photo of a man who lost a leg in a bombing holding his son who was born without legs at all has won the Siena International Photo Awards top prize.

Syrian father Munzir al-Nazzal has struggled to get by since he was injured in a bombing of a market and fled to Turkey. But what occupies his thoughts most of the time is not the leg he lost: It’s the future of his 5-year-old son, Mustafa, who was born without limbs.

The two are the subjects of a photo by Turkish photographer Mehmet Aslan, which came in first out of thousands as photo of the year in the annual Siena International Photo Awards.

“We wanted to bring attention to this,” said Aslan, who hopes the image will highlight the refugee child’s quest for prosthetics. “The boy always has lots of energy. The father seems to have given up.”

Aslan told The Washington Post he had met the father of three in southern Turkey near the Syrian border, where they lived in a shop. The parents have since moved in an attempt to get help for Mustafa, their eldest, who needs medical treatment they cannot fully afford, and special prostheses they cannot find in Turkey.

“I swear I’ve gone from one hospital to another. There isn’t a town where I haven’t asked about this, but nothing has come of it,” Munzir told The Post.

Mustafa, who was born with the congenital disorder tetra-amelia, smiles as he rolls on the carpet, before his little sister picks him up and places him on a sofa. “This is how he is, but he’s so, so smart,” his father said.

His family has relied mostly on charity in more than three years since they escaped Idlib, the last major pocket of Syria in the hands of Islamist rebels after 10 years of war, which has come under attacks by government forces and their allies.

That corner of northern Syria sits along a border dotted with camps crammed with refugees. In a decade of conflict, millions of Syrians have poured into Turkey and other countries in the region. The photographer, Aslan, hopes the photo might also help ease a backlash against refugee communities in Turkey, where some blame them for economic woes.

His image — which he titled “Hardship of Life” and which jurors described as “emotionally strong” — will be placed on display with others in an exhibit in Italy this month. 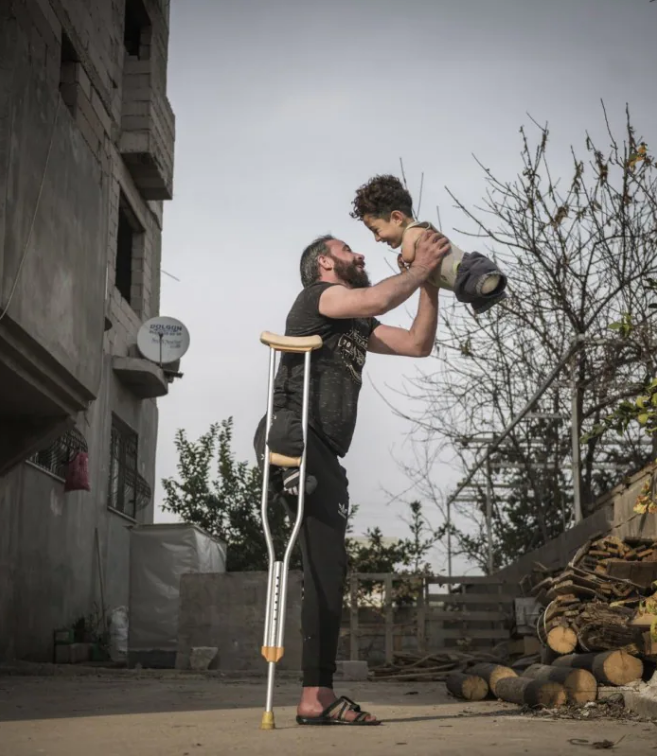 A Syrian father who lost his leg in a bombing holds his son who was born without limbs. Photo by Mehmet Aslan as submitted and released to the Siena International Photo Awards.)