Whether the Hawkeye Cauci: Iowa Caucuses Under Fire From Dems For 2024 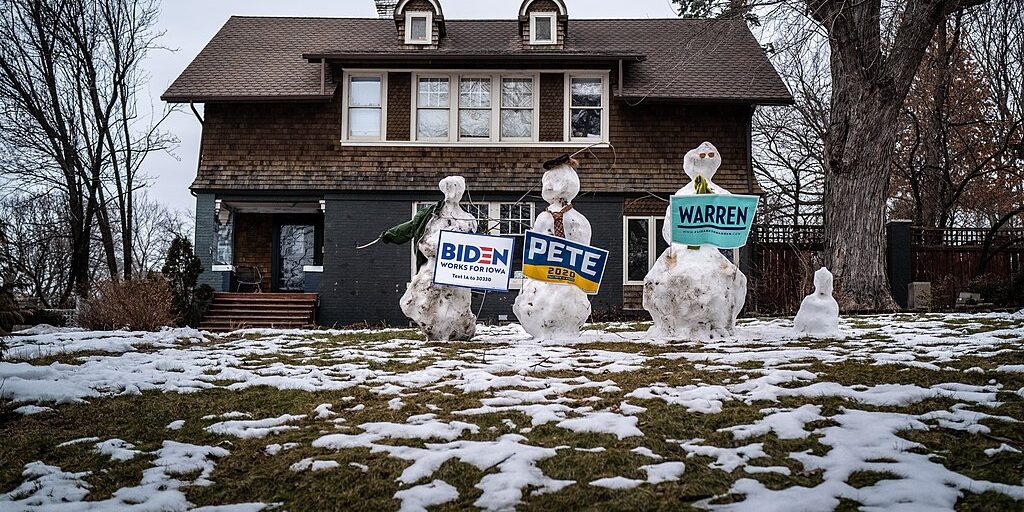 Yard signs leading up to the 2020 Iowa Caucuses. Photo by Phil Roeder from Des Moines, IA, USA, CC BY 2.0 <https://creativecommons.org/licenses/by/2.0>, via Wikimedia Commons

Have we seen the last of the months-long prostration of Democratic presidential candidates leading up to the Iowa Caucuses every four years? Some Democratic Party power brokers are putting that long-held wish of some into action.

President Biden is not a big fan. Former Democratic National Committee chair Tom Perez is openly opposed. And elsewhere in the Democratic inner sanctum, disdain for Iowa’s first-in-the-nation presidential caucus has been rising for years.

Now the day of reckoning for Iowa Democrats is fast approaching, as the national party starts to create a new calendar for the 2024 presidential nomination that could remove Iowa from its privileged position for the first time since 1972, when candidates started flocking to the state for an early jump on the race to the White House.

The caucuses’ reputation has been damaged by high barriers to participation, a dearth of racial diversity, the rightward drift in the state’s electorate and a leftward drift in the Democratic participants. The state party’s inability to count the results in 2020 only deepened dismay in the party.

Biden, who handily won the party’s nomination in 2020, noted the lack of diversity in the caucus during the campaign — “It is what it is,” he said of the calendar — and called his fourth-place finish in the state a “gut punch.”

“We have to be honest with ourselves, and Iowa is not representative of America,” Perez said Friday in an interview. “We need a primary process that is reflective of today’s demographics in the Democratic Party.”

Others in Biden’s extended orbit have come to similar conclusions about the caucuses, for varied reasons.

“It is not suited to normal people, people that actually have daily lives,” South Carolina State Sen. Dick Harpootlian, a former chairman of that state’s Democratic Party and a longtime Biden ally, said of the caucuses. He described the laborious process of participating, over multiple hours, in person, on a weeknight, as far more restrictive than the requirements of a new voter law in Texas that Democrats universally oppose.

“I just think the caucus process as it exists in Iowa is not suitable in 21st-century America,” he said.

Those views are broadly held among party officers, even though Democratic National Committee Chairman Jaime Harrison, a former South Carolina party chair, says no decisions have been made. He intends to “let the process play out,” according to a statement to The Post. That process will be controlled by Biden and a small group of his allies, following the party’s tradition of granting the sitting president control over party decisions.

The first step took place Saturday, when the party met to accept a slate of at-large members and committee assignments that had been put forward by senior Democratic officials, in consultation with Biden aides. The number coming from Delaware, Biden’s home state, will bump to five from one, and the number of members from Washington D.C., will rise from 15 to 20, which has angered some state parties that are losing representation.

For all the rhetoric about precedent, priorities, and political tradition, if the Iowa Caucuses pass into history it will probably have a lot more to do with just base-level incompetence than anything else. Already an unruly system by any measurable standard, 2020’s edition of the Iowa Caucuses was an unmitigated disaster on every level. The optics where horrible, the national narrative had already moved on by the time it was settled, and to this day the Bernie Bros and the Pete Patrol who still remember the moves to the “High Hopes” Buttigieg dance still argue about who really won.

But most damning for the Iowa Caucuses future prospects is the state just doesn’t tick the boxes the modern Democratic Party needs to check off when selecting and preparing a national candidate for the highest office in the land. Joe Biden steamrolling the primary process once far more diverse and representative of the party states like South Carolina rolled around speaks more loudly against any argument for Iowa than arguments for. And with the sitting president having quite a bit of say in the steerage of the party next time around, Team Biden is likely to remember the president’s fourth place finish in 2020.