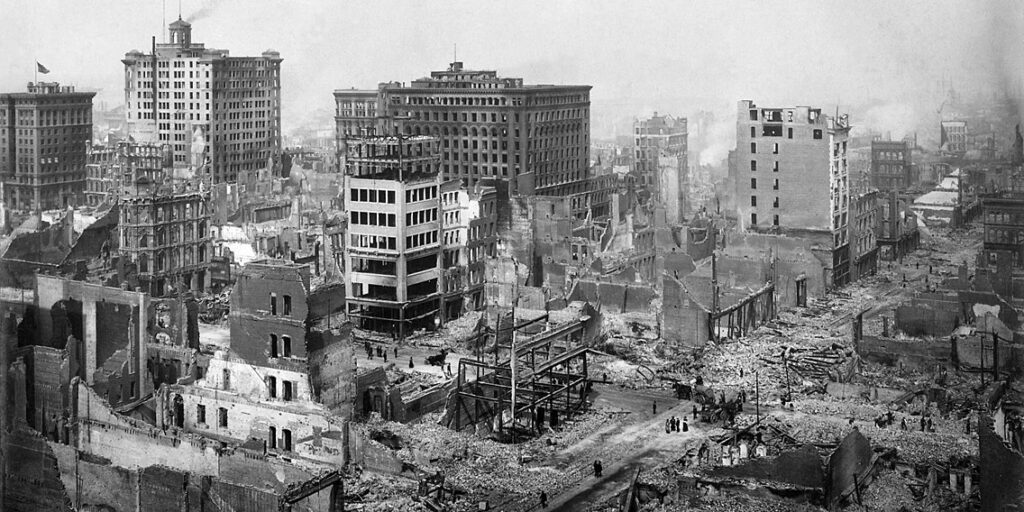 Post and Grant Ave. after the San Francisco earthquake, 1906 By Chadwick, H. D. (via Wikicommons) One of the worst natural disasters in American history.

There is a startlingly euphoric scene in Heinrich von Kleist’s 1806 story “Jeronimo and Josepha” in which the title character, Josepha, suddenly feels:

as if she were in the land of the blessed. She had a feeling, which she could not suppress, that the preceding day, despite all the misery it had brought upon the world, had been a mercy such as heaven had never yet bestowed upon her. And indeed, in the midst of this horrifying time in which all the earthly possessions of men were perishing and all nature being engulfed, the human spirit itself seemed to unfold like the fairest of flowers.

This is saying something because the preceding day, 13 May, 1647, an earthquake had leveled her city of Santiago, Chile. Still today considered the worst quake in the city’s history, it brought down nearly every building and killed about a thousand people. Over the next few weeks, about 2,000 more would succumb to typhus. However, in Kleist’s story, the earthquake had also fractured and shaken loose the social order, likely saving the young girl’s life.

For you see, Jeronimo and Josefina are young lovers, forbidden from seeing each other. She is put in a convent to keep her pure, but he sneaks in and one thing leads to another; months later, she collapses in labor pains on the cathedral steps on the day of Corpus Christi; and for this unbelievable sacrilege, Josefina is condemned to hang and Jeronimo is put in jail, where he decides to take his own life. And then, as if by miracle, the earthquake saves and frees them both, an apparent answer to his prayers. The disaster also seems to have brought their neighbors together in a more just and forgiving social order, however temporary.

This is a phenomenon that Rebecca Solnit and others have observed: the short-lived egalitarian communities that arise in disasters, and are later remembered with paradoxical fondness, is the subject of her 2010 book A Paradise Built in Hell. My less-egalitarian landlord, who did relief work in New Orleans after Hurricane Katrina, also remembers this fondly: people coming together in a spirit of love and mutual support that would suggest that perhaps it’s civil society that makes us so uncivil. And, no doubt, some of us hoped, at the very beginning of this pandemic, that a kinder, gentler world would result from its slow-motion disaster, a hope encapsulated in this particular time capsule:

The Great Realisation | Tomfoolery | A bed time story of how it started, and why hindsight’s 2020 🛌

Kleist was decidedly less optimistic. Like Voltaire’s Candide, his story was clearly inspired by the Lisbon earthquake, which fascinated and troubled many of the writers of the Enlightenment. And, like Candide, his story is a critique of theodicy. Kleist goes quite a bit farther- in a sense, his lovers’ prayers actually are answered, at the expense of hundreds dead. And yet, when they go to pray at the Cathedral with their new friends, the Bishop calls out the two lovers for evoking God’s wrath with their blasphemy and the mob stones them to death, and only avoids killing their child by mistakenly killing a different baby Josefina was holding. Barely suppressed violence can also be shaken loose by collapsed social orders; I was reminded of the “Amakasu Incident” in Japan: following a catastrophic earthquake in 1923, the military police used the occasion to murder a prominent anarchist writer, his anarcha-feminist lover, and his child nephew, and throw their bodies down a well. Vigilante groups also come together in disasters.

Just what is Kleist saying? 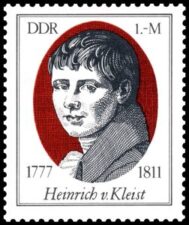 Like many, von Kleist was left devastated and shaken by the Enlightenment, yet, in a way that seems wholly unique: he was fairly unbothered by secularism; but Kant’s epistemological theory, which intended to set definite limits to what our reason can apprehend in order to make room for faith, shattered Kleist’s belief in human progress. “The thought that here on earth we know nothing of the truth, absolutely nothing, has shaken me in the very sanctuary of my soul,” he wrote. “My only purpose, my supreme purpose has collapsed; I have none left.” Even human nature itself was now a mystery. His despair probably forced Kleist into being a writer; the weird detachment of his stories would earn him fans like Kafka; yet, at age 34, it also drove him to blow his brains out in a suicide pact with a young cancer patient, Henriette Vogel.

Questions about how we behave in disasters are always questions about human nature and its relation to civil society, subjects that obsessed writers of the enlightenment. Partly, this was because European explorers were simply encountering so many native people in far-flung regions of the globe who were living closer to the state of nature, at least to European eyes. But it was also tied up with the question of how we’d gone from the state of nature to civil society in the first place, something of great importance as the legitimacy of monarchical regimes were being called into question. If Kings were not direct descendants of Adam, and privileges were not the result of some “great chain of being,” how did we get here?

This was the big question addressed by the social contract tradition, which most of us remember in rough outline. Writing in the shadow of the English Civil War, Thomas Hobbes saw the natural human condition as a brutal war of all against all, in which people surrendered their rights to a strong central authority as a way out of chaos. Jean-Jaques Rousseau disagrees with this, arguing that man in the state of nature has no property, and thus nothing to really fight about. The problem didn’t arise when they first came together in groups; but the development of agriculture, metallurgy, and then private property and the division of labor, led to inequality, envy, hierarchy, and all of the other evils we know so well. Somewhere in the middle is John Locke, who believed that people in a state of nature are equal and independent and really come together by contract to resolve their inevitable conflicts with the aid of a government and laws. He also sees this as the result of the development of private property, but does not see government as being particularly concerned with inequality.

And so, we can see one obvious problem with social contract theory: these philosophers naturally assumed people come together for rational reasons of mutual advantage- you can give me this, and I can give you that- but, in plenty of situations, we come together because, well, we just sort of like one another: i.e. affections. As Martha Nussbaum notes:

really, it’s not because they’re afraid and they want to strike a new deal for mutual advantage; it’s much more out of love- it’s out of the love for humanity and the love of human dignity that they want to join with others in creating a world that’s as good as it can be.

But, however it happens, it remains clear that we live in societies shaped, in large part, by Enlightenment Liberalism and its underlying thoughts about how “primordial man” reached the state of “civilization.” We’re here now, until the next disaster.

It is also clear that civil society places some limits upon human nature; to this day, we remain fascinated with what might happen were it all to collapse. Movies about natural disasters, zombie plagues, apocalypse, and the end of civilization vastly outnumber stories in which the present order is improved upon or reaches a state of perfection. Most of our stories are “Hobbesian” in that common people are expected to panic, riot, cause chaos, and generally engage in a war of all-against-all. In other words, they take the authoritarian viewpoint of rulers towards the ruled. What seems to happen more often, according to most disaster studies, is that average people are resourceful and can improvise and work together fairly well, while their leaders often panic and make bad decisions.

For we mostly-civilized folks, the State of Nature is a bit like the possibility of an affair for married people- something repressed, but never quite out of mind. The vast majority of us never chose the social contract or the society into which we were born; as Locke explains, we give it our tacit consent when we reach adulthood and every day afterwards that we stay. Okay, but what can a social contract mean to a homeless person in a city park? Or in societies that can’t allocate basic resources such that people can survive and contribute and flourish? Or, after all, when the shit hits the fan?

And, even in good times, we retain ambivalent feelings about civilized life. A great deal of art from the mid-nineteenth to the mid-twentieth century dealt with the stifling pressures and superficial pleasures of bourgeois life, and the mixed feelings they engendered. At a certain point, “civilized life” is something that wins your soul, but it never quite wins your heart. If art no longer addresses these themes, it might be simply too closely entwined with consumption. But the retreat into nostalgia and adolescence- flying away to CG Never Never Lands- nevertheless sounds its own warnings about where are hearts are.

And, after all, there are pleasures to be had in bourgeois life, but they can also keep us from reaching a state of full adulthood. And disasters and revolutions might show us that the solid edifice we wish to hurl ourselves against just might be posterboard. What I suspect we’ll keep learning in our current and never-ending disaster, which will keep right on unfolding, is that “human nature” is protean, and many of us would rather trade the strictures of civil society for the window of possibility opened by catastrophe.