The UN: What’s the Bloody Point? 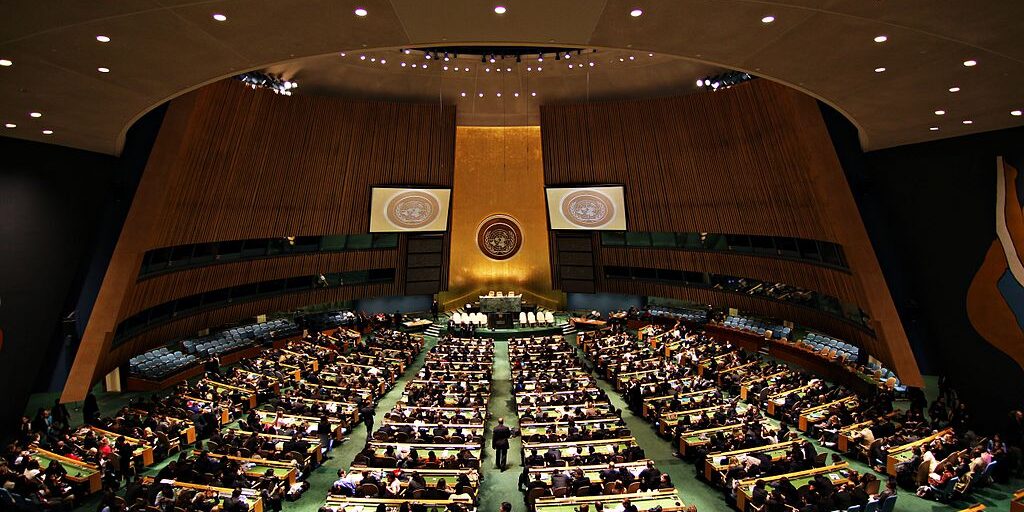 In what universe is the UN a helpful organization?

I posit it isn’t just worthless to America, but it is worse than useless. The US pays around 22% of its operating budget, so what do we get? Nothing of value. The UN has become a bunch of nations arguing themselves into pretzel knots to avoid confronting the clearly evil bastards among them. Diplomacy with the desire to avoid war at all costs means we let psychopaths continue to terrorize their own people, with endless rapes, tortures, and murders, with some light genocide thrown in. If the country isn’t Israel, the UN is lo to criticize it; because the UN is stuffed to the gills with criticism of Israel. Noam Chomsky taught them well.

The pointlessness that Team America: World Police righteously mocked has countless examples, some very recently. The Taliban has taken over the Afghani government, installing at least one member of al Qaeda within the cabinet. While the Taliban goes door to door to find people who helped our now wasted mission in Afghanistan, the UN is criticizing the lack of inclusivity and diversity in the leadership structure of this new government. Oh, the organization that shoots women in the street for dressing “immodestly” didn’t put any women in their government leadership? Shocking. The Taliban is evil, plain and simple. But the UN doesn’t really care about that. Evil is one thing, but lack of diversity is a bridge too far!

But what does the UN really accomplish? Bad actors on the global stage get to hide behind the UN security council when China and/or Russia, who both have veto power (as does the US) to keep the harshest criticisms from landing on targets that deserve it. American liberals seem to like the UN, much like their fondness for Europe, but what does it actually do? The International Criminal Court is in the same boat. While it is an organization the US does not recognize the authority of, the ICC is similar in that no country would belong to it if the ICC’s interests clashed with its own. When it isn’t passing judgments against countries that couldn’t care less, it is mostly used to try captured war criminals to give the leaders of those countries cover to imprison their enemies. If a judgment was laid down that a country disagreed with, that country would just pull out of the ICC, leaving the ICC to twist in the wind. The UN, like the ICC, lacks an enforcement mechanism if the country targeted is opposed to it. All those resolutions passed against Israel result in bupkis within Israel.

Bad actors depend on collective global apathy, even if they try to extend their reach beyond their borders. Various awful regimes are merely sponsored states of worse countries. Iran has Hezbollah in Lebanon; China has North Korea. Multiple awful governments prop up the leadership in Cuba and Venezuela. While Eddie Izzard was mostly correct in pointing out that as long as a horrible leader kills merely his own people, the rest of the world will largely leave him alone, this didn’t stop Putin from annexing Crimea. Or prevent China from doing all that bad business in Hong Kong and the South China Sea. To say nothing of the CCP’s continual threats directed at Taiwan. Which is an independent country, by the way.

And those UN peacekeepers? They rape more children than Catholic priests! It has its own Wikipedia page! More than 100 UN peacekeepers ran a child sex ring in Haiti for over 10 years! Over 2,000 claims of sexual abuse! No one even went to jail for it! And that’s not even the only country it happened in! Claims of child sexual abuse, torture, and trafficking proliferate in several other countries these peacekeepers go to. How hasn’t that organization within the UN been burned to the ground and the ashes salted? Only in international diplomacy (and organized religion, to be fair) would such a publicly known scandal lead to zero consequences for anybody.

The creation of the UN had good intentions, but what’s the bloody point? Avoiding war is a reasonable position, but war is inevitable. You have to actually back up harsh criticism with clear-eyed action. Sometimes, that means war. We must confront evil instead of pretending it doesn’t exist and hope the problems dissipate like rain on a sunny day. Bad actors all over the world, those with either world domination or world obliteration aims, continue to proliferate and always will. Human nature will not be tamed by the misguided righteous. Iran, North Korea, Turkey, and Venezuela, along with countless international or regional terrorist organizations, are all suicidal to various degrees while China (and Russia to a minor degree) clearly wants to dominate the world with glorious CCP-style communism. Isolating countries with horrible intentions is what we should be doing, not continuing to let the succor of cheap goods from said countries lull us into a false sense of security. Opening China did not liberalize its view of civil liberties. Giving Russia access to worldwide oil markets has not made Putin any less a murdering scumbag. The UN is a doormat for the awful.

The US should pull out of the UN. We get nothing functionally useful out of it. Turn the UN HQ in NYC into low-income housing. But, of course, limousine liberals would hate both of those things.