(Before I get into anything, I want to say that I thought that I already reviewed Tharsis when it came out! I can’t find any evidence of this on the site, though… so, anyway, if I repeat myself, I’m sorry.)

I’ve played a lot of games where the general idea is to give the player a lot of slop. Like, you don’t have to make every move perfect to do well. Heck, you don’t have to be perfect to excel. You can run around doing your thing and just by not playing stupidly, you can beat the game with no sweat at all. For example, in XCom and XCom2, you’re eventually waltzing through maps and your soldiers are taking precious little damage while you’re averaging more kills than they’re averaging points of damage done.

Or, you know, like in Final Fantasy games where you hoard Ether potions because you can’t buy them in stores and you say “I’ll use them in the boss fight… but not *THIS* boss fight because it’s not the *MAIN* boss fight…” and you beat the game without ever drinking one until you get to the last battle? (And even then, it feels kinda transgressive?) Well, those games have the elbow room where you can get into most fights without even thinking about being tempted to use one.

Other games intend to be played much closer to the bone. Darkest Dungeon is a great example of this. If you’re used to not taking more than 50% damage in an “easy” dungeon run, you’re going to find yourself restarting and restarting and restarting again. Rethinking and rethinking and going through it again and learning that beating the boss monster with only one character left (and that one character only left with one hit point) is *EXACTLY* accomplishing the goal you set out to do. 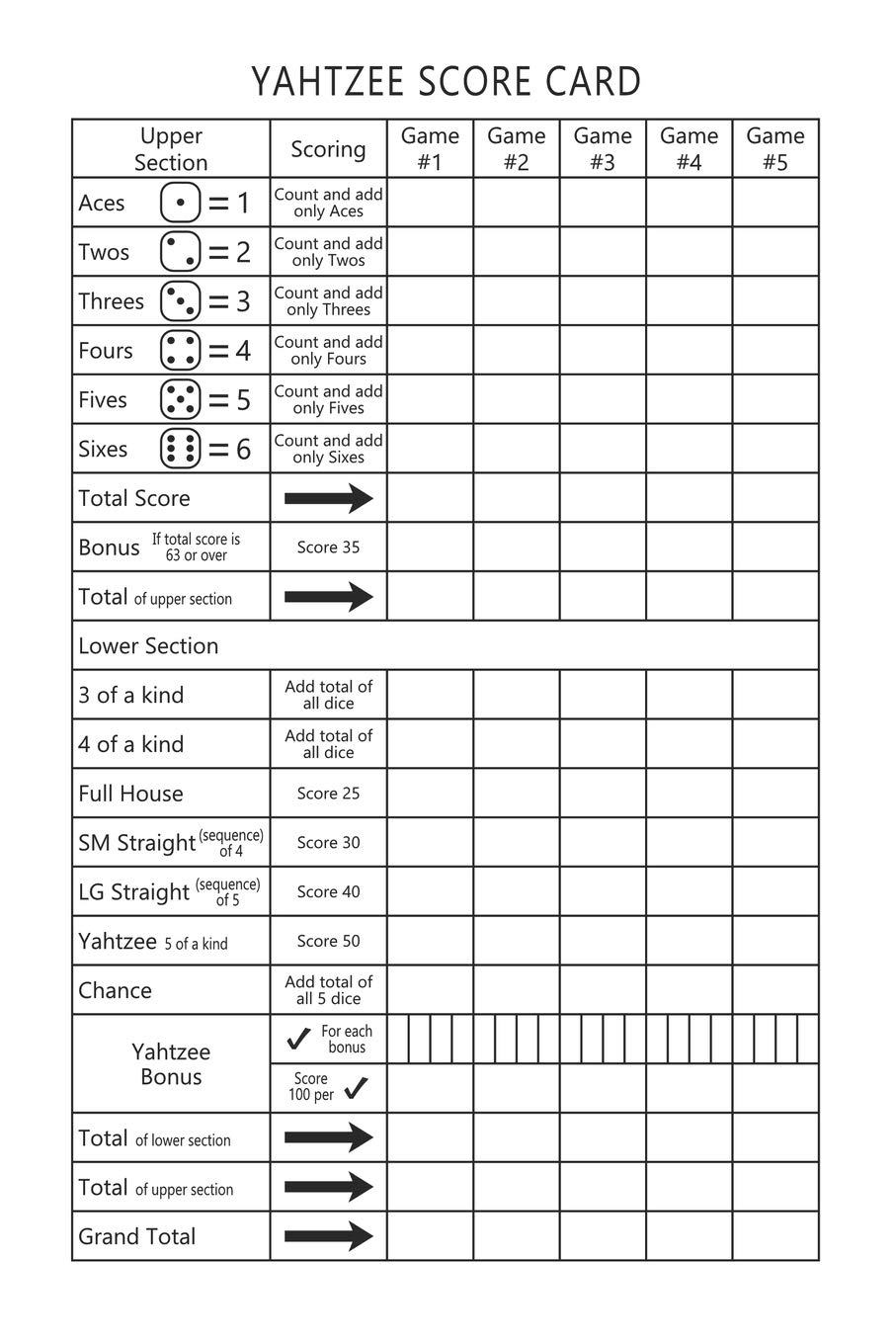 You know that, to win, you absolutely *HAVE* to get the sum bonus. Like, you need to get 63 points in the 1s-6s. So if you roll 4 sixes after you’re done with your first roll of the game, you’re stuck wondering… do I put this in the 1s-6s and give myself a place to dump an awful roll in the 1s and have a cushion there? Or do I put this in 4 of a kind and know that I have a cushion against my opponents who are likely to put something less perfect than 4 sixes in there?

Because, seriously, in the first handful of rolls of the game, there are so many things that can go right but oh-so-many-more things that can go wrong. Do you reroll the 5s and maybe go for 4 of a kind? Or 6s? Or, dare a ask, Yahtzee? (Personally, I prefer to get my Yahtzees with ones or twos.)

Because it’s all well and good to stack points in the big ones but if, at the end of the game, you haven’t gotten your Sum Bonus yet? You’re going to fall behind the guy who said “slow and steady wins the race”.

It is also Epic Game Store’s free giveaway this week.

The basic conceit is this: You are on a trip to Mars that, seriously, has Gone Wrong.

Let’s do the first half of the first level of the tutorial together: 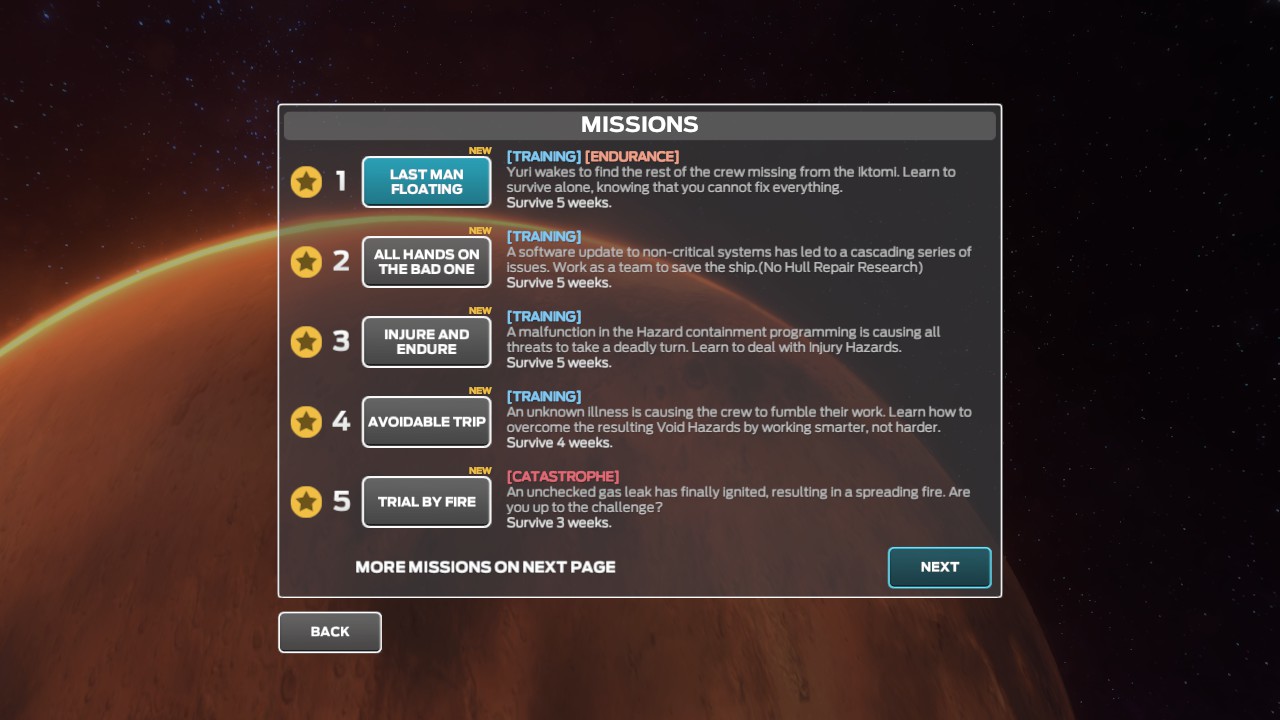 You start out with Yuri. You wake up alone on the spaceship. Hey! Where is everybody? They were here when I went to bed! Well, there are three main problems: 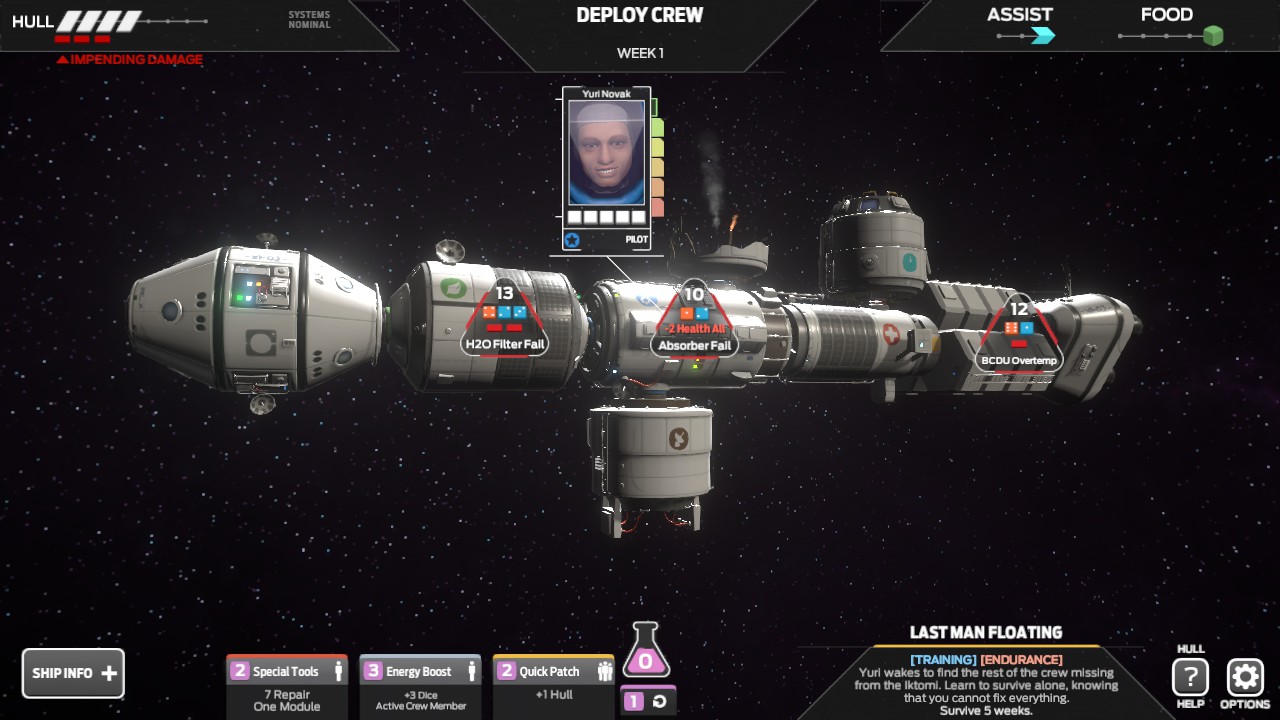 And, well, there’s a fourth problem.
The ship has four hit points. It’s going to take three after your next turn. Then what. 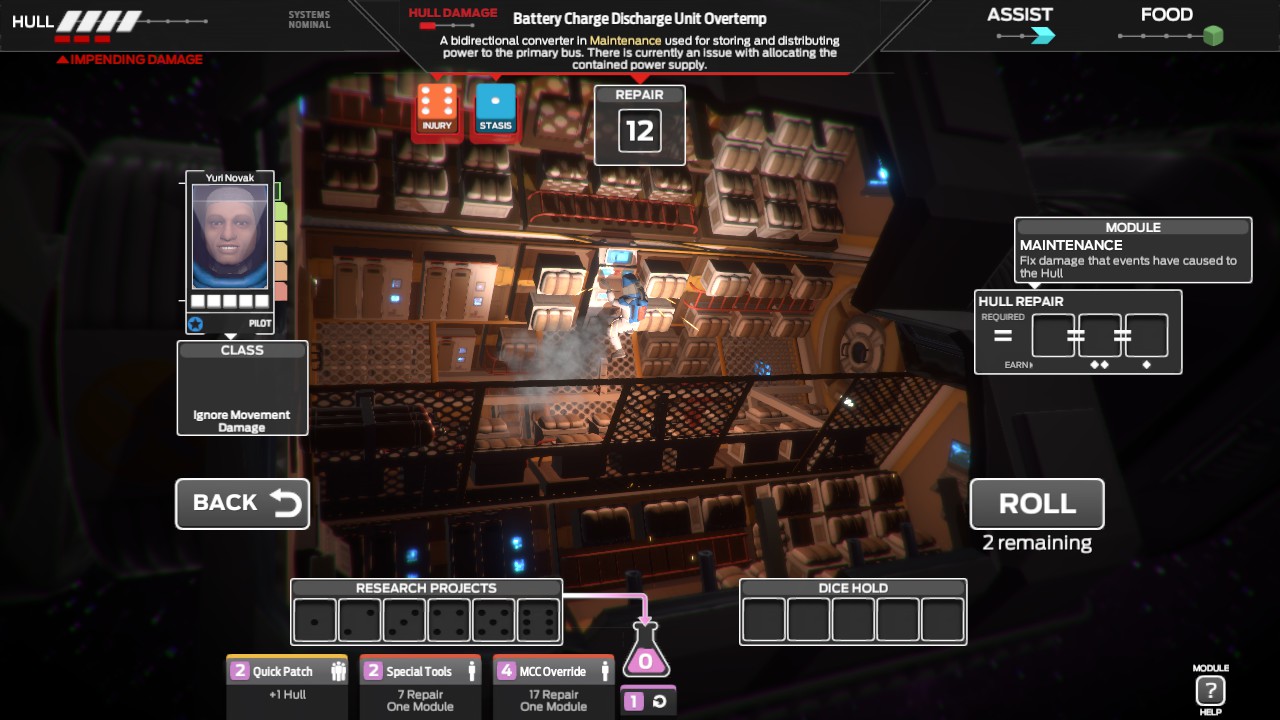 Okay, what I want to draw your attention to is there in the upper left:

A six gives me an injury. (Just once. So if I roll two sixes, I still only take one damage.)
A one gets affected by stasis (that means I can’t reroll it… but it only freezes one die).

And we have to get 12 points of repair to get past this particular problem. 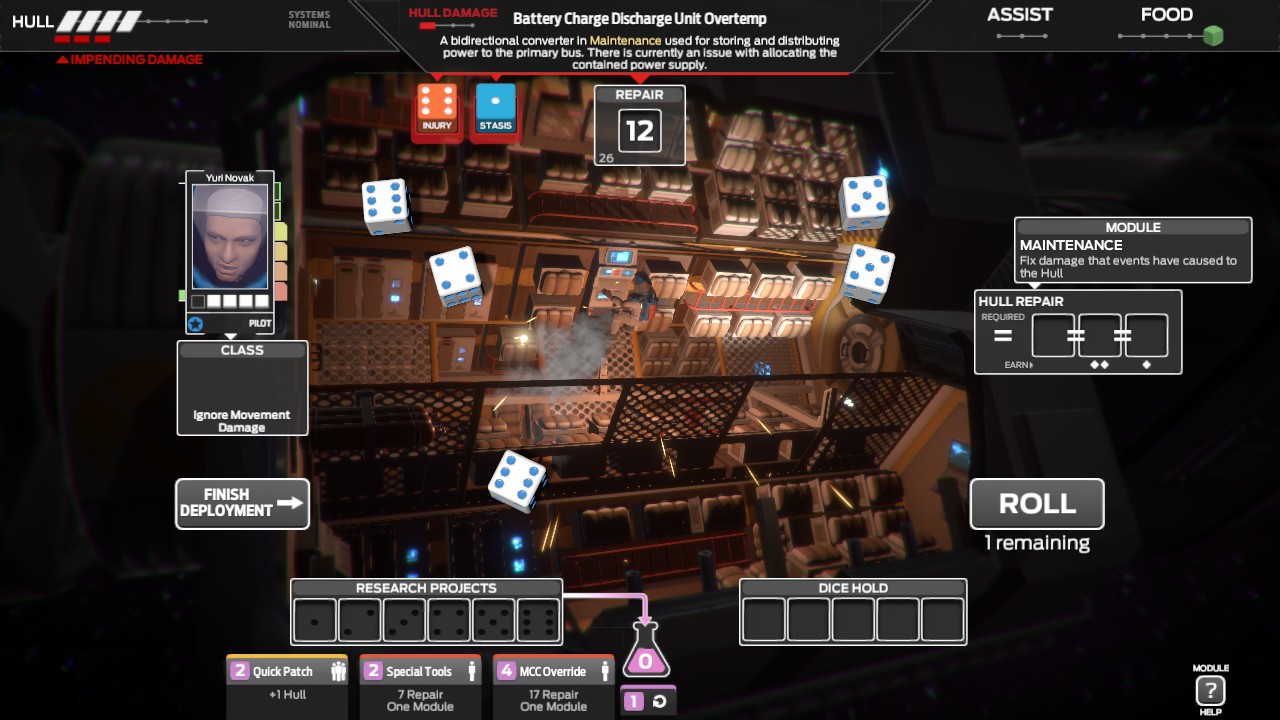 I got very lucky. A couple of sixes. Let’s repair the BCDU… and let’s drop the fives in hull repair. 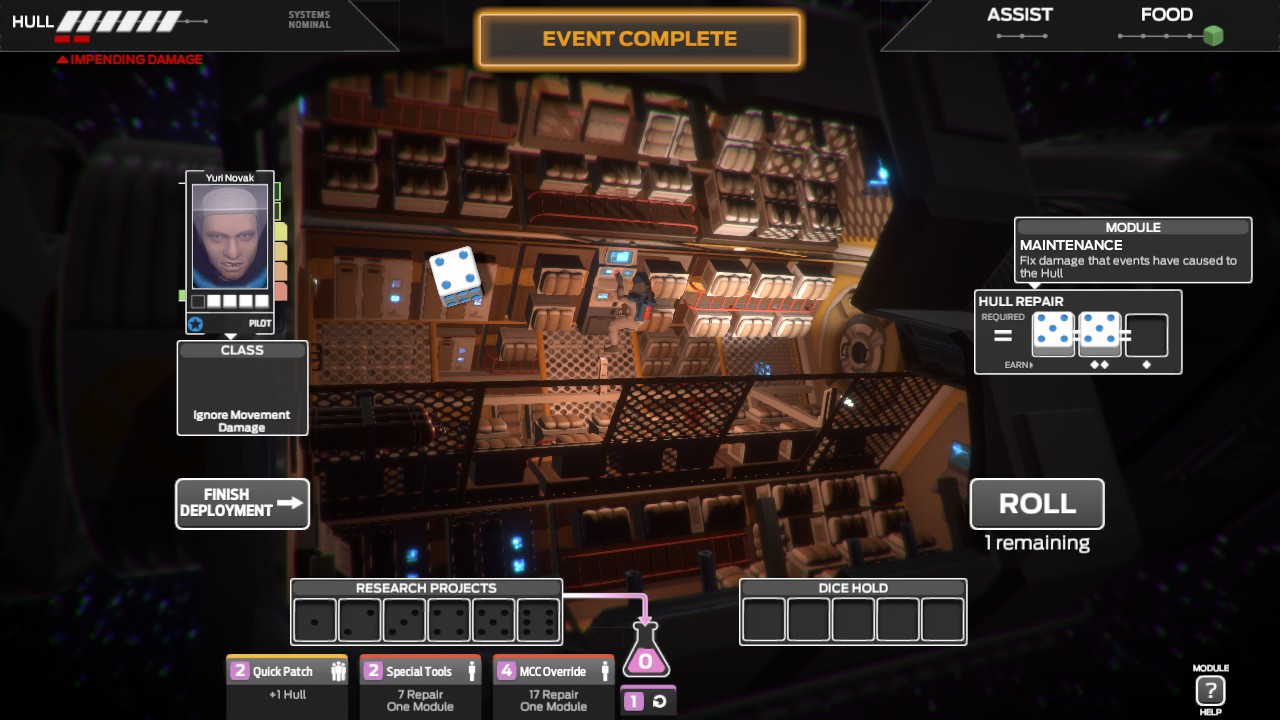 And, just like Yahtzee, we’ve got a reroll. Let’s go for a five!

Bummer. Didn’t get one. Got a four. Let’s drop it into “research projects” and complete the event: 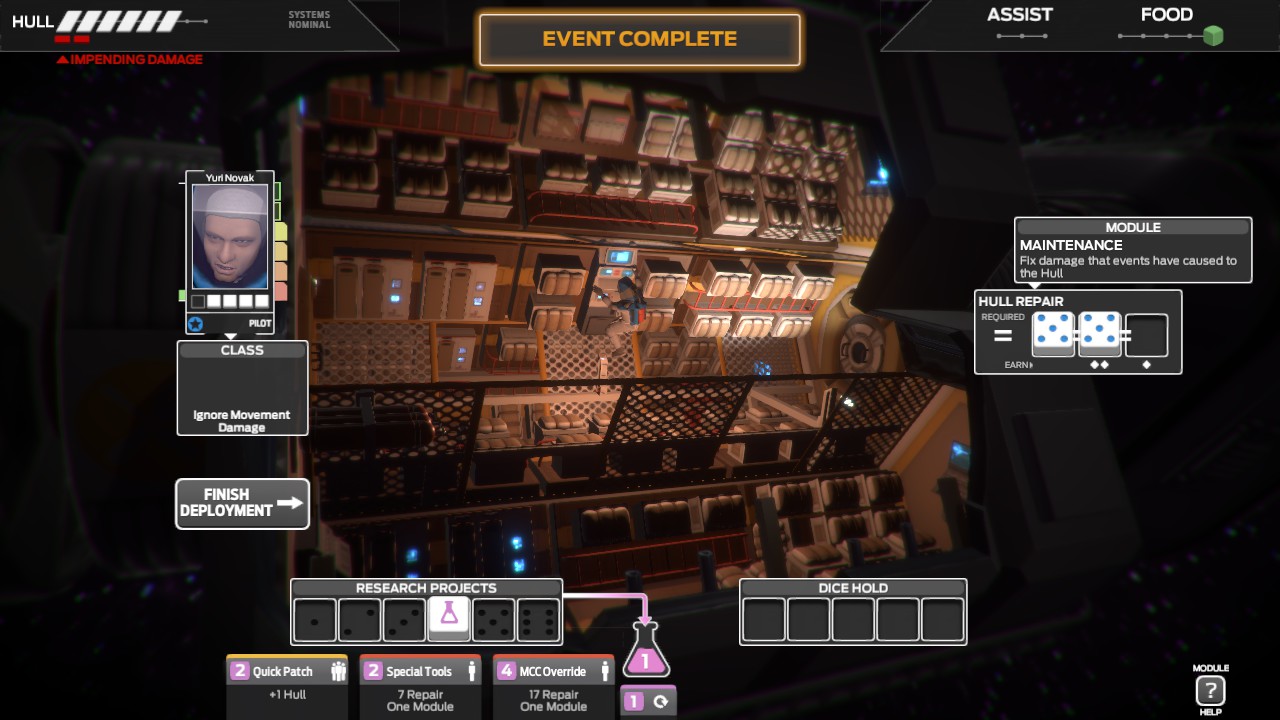 Okay. The asteroid hits the ship, we strengthened the hull enough to only take two points of damage… now… let’s eat! 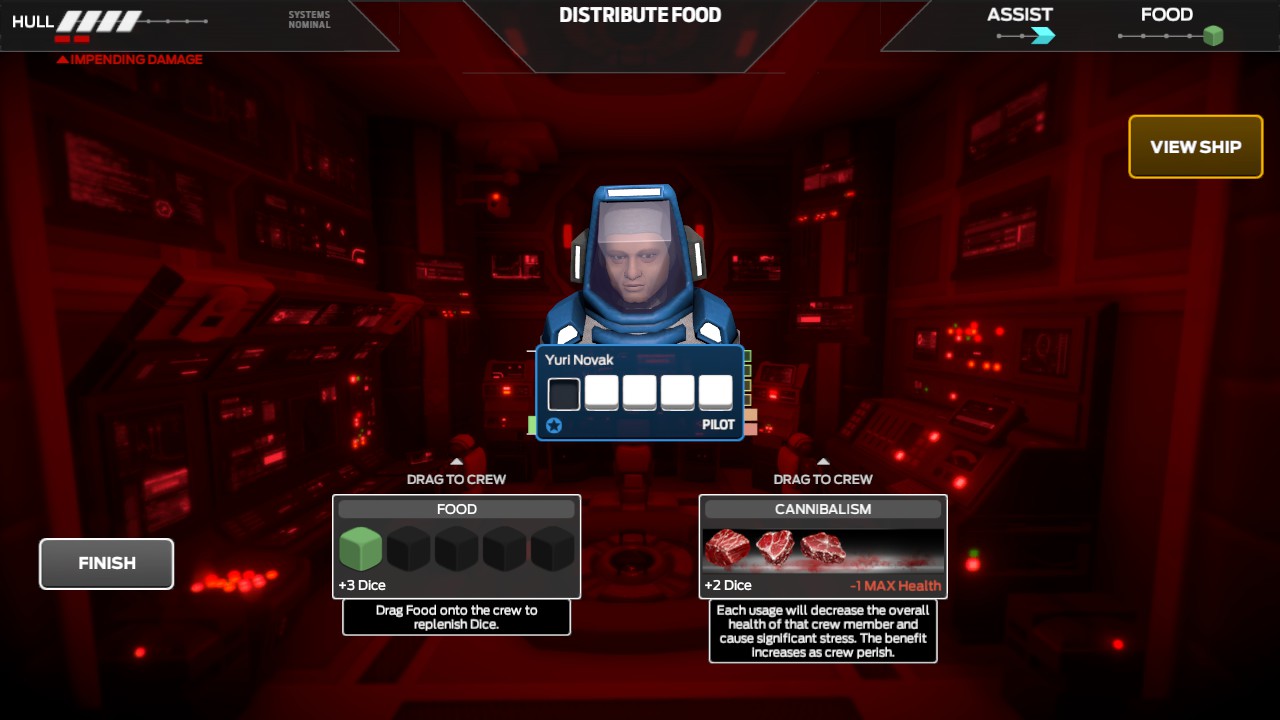 Yuri isn’t *THAT* hungry yet… and it’s a good thing because he only needs to eat one unit of (real) food to get back up to full health.

Feed him and let’s go to the greenhouse. We can withstand another hit thanks to our efforts in maintenance and we can maybe make enough food to get us past that… 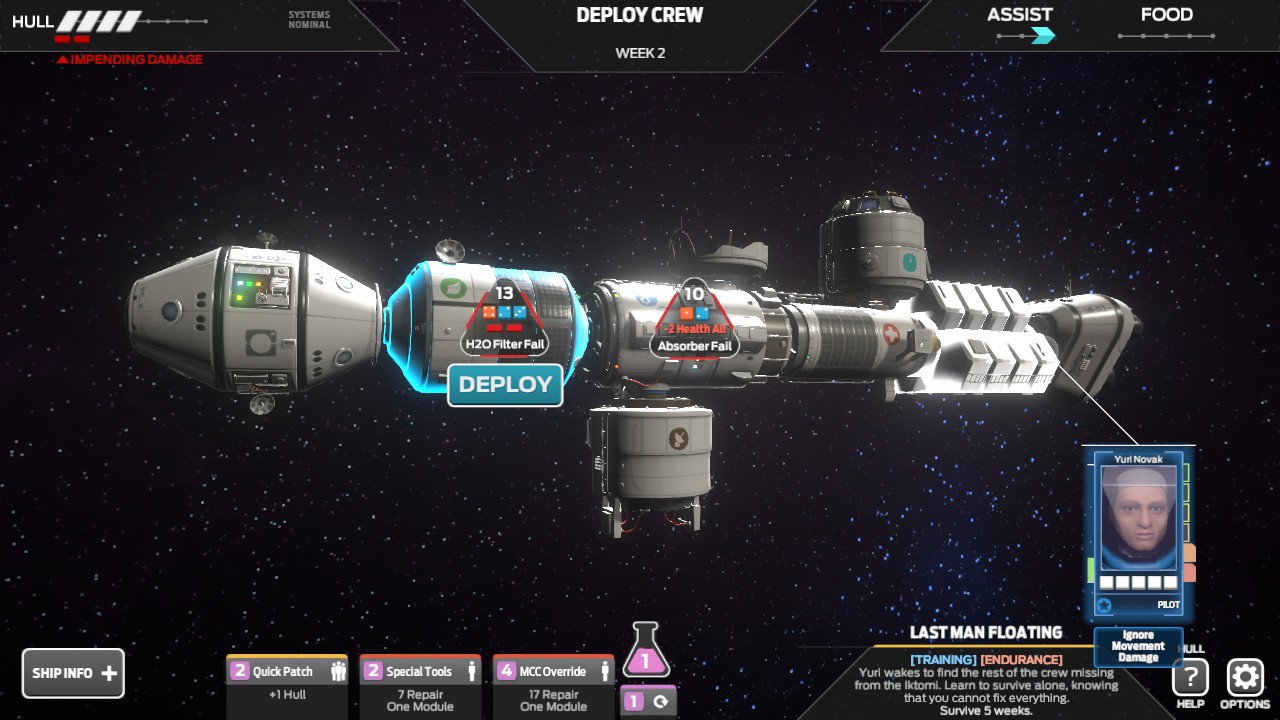 Here. Check it out. 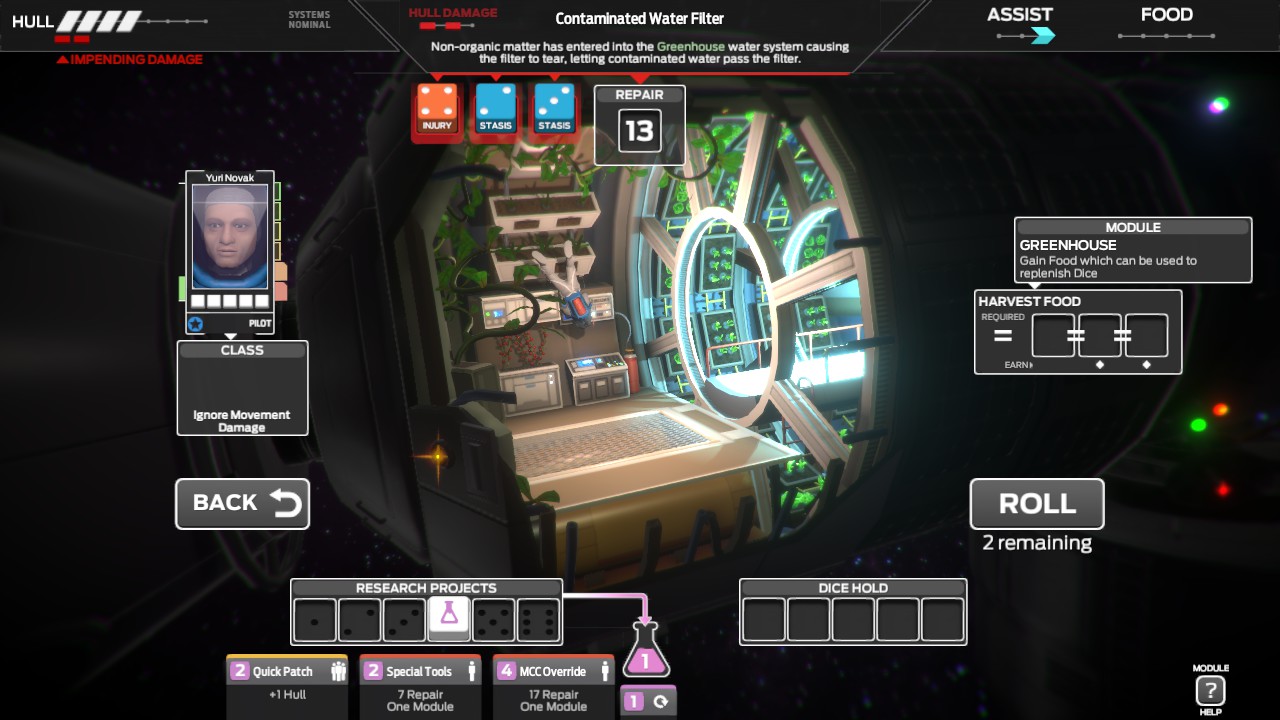 We can see that we have two rolls left, fours do damage and 2s and 3s get hit with stasis and we need 13 pips to fix everything up. 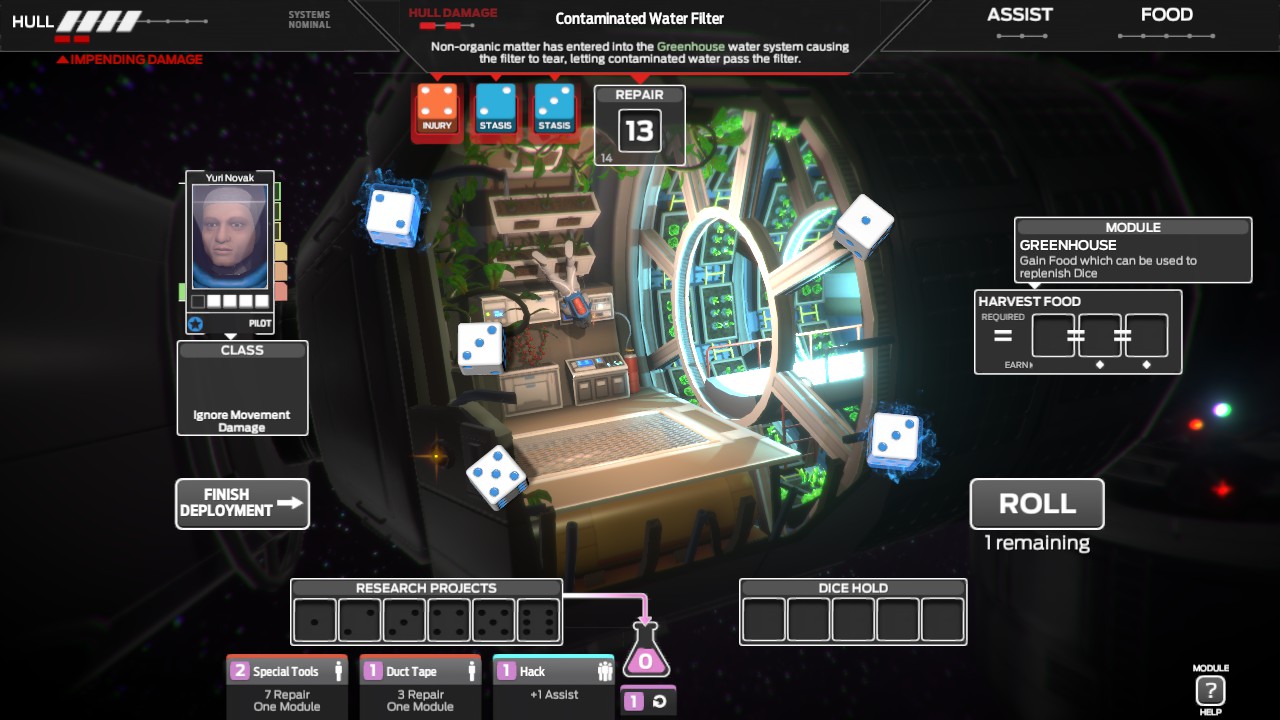 Well, two of our die got hit by stasis. One of them is a 5. We need 13. Let’s put the 5 and the two stasis die into repair and see that we only need 3 more pips? Okay, we’ll put the 3 in there as well and not worry about the reroll and not worry about having to eat something… given what’s in the fridge. 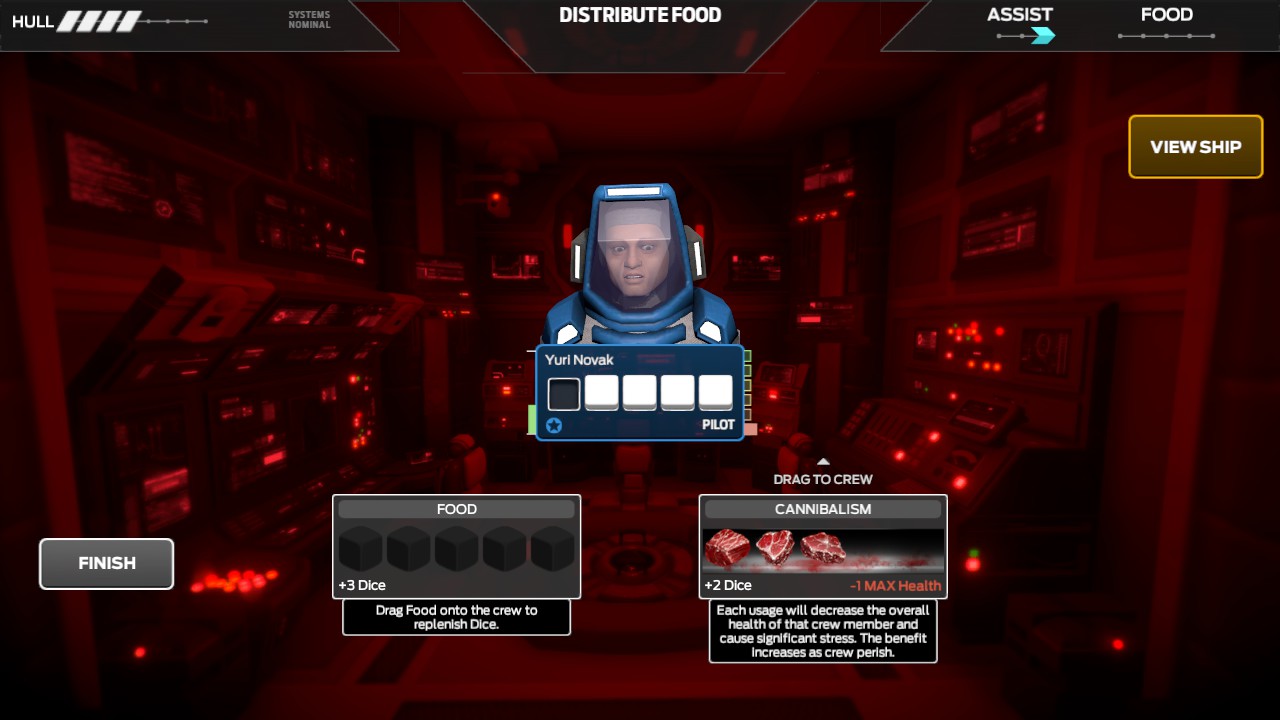 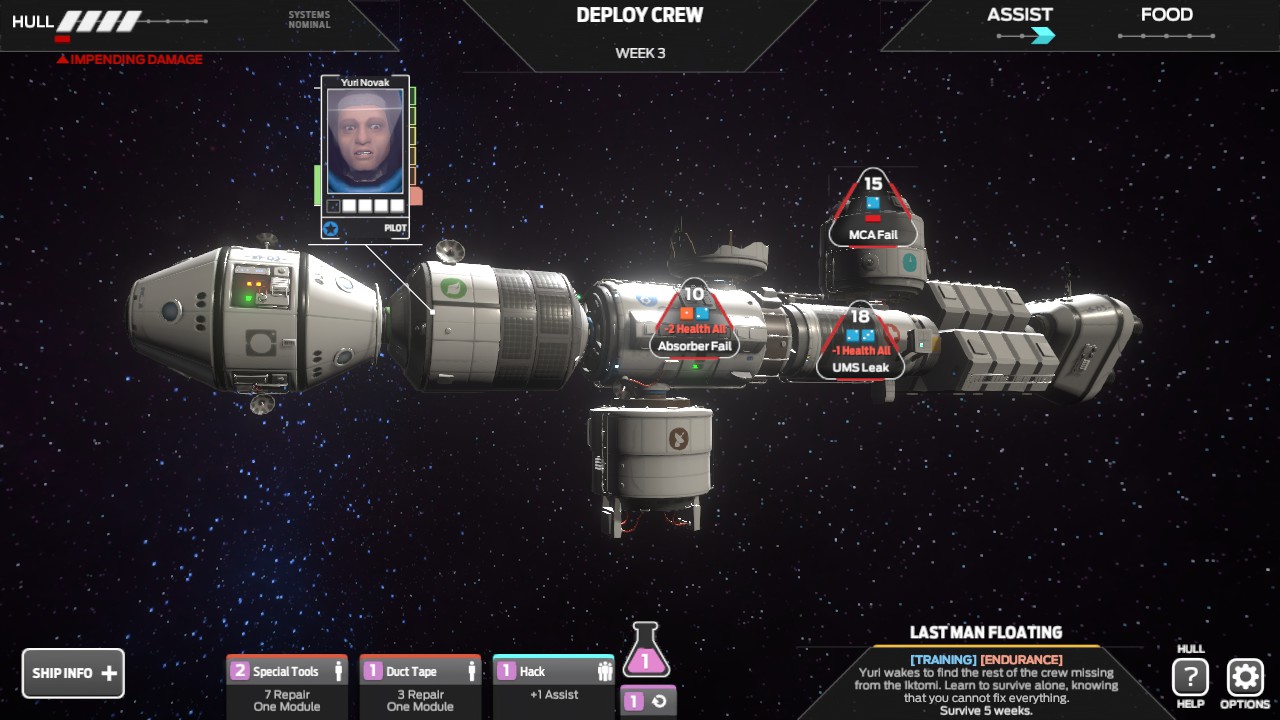 We don’t only have to fix Life Support, we have to go back to Maintenance and Equipment Motor Control!!!

It’s an awesome single player game, if a bit depressing, and it’s *FREE* at the epic game store. Get Tharsis.

(Featured image is an excerpt from the main loading screen that I thought was appropriate. All screenshots taken by the author.)