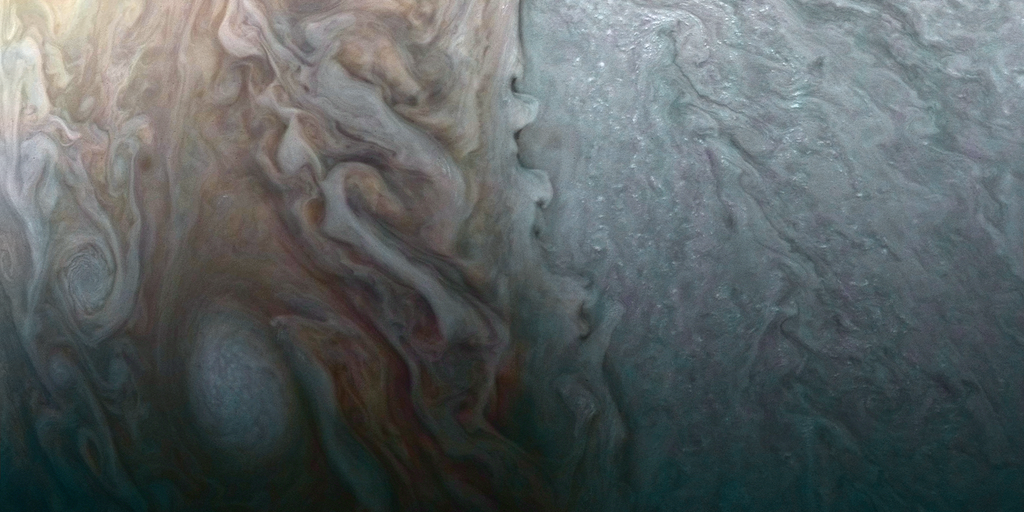 This image, taken by the JunoCam imager on NASA’s Juno spacecraft, highlights a feature on Jupiter where multiple atmospheric conditions appear to collide.. Photo by NASA/JPL-Caltech/SwRI/MSSS/Roman Tkachenko, Public domain, via Wikimedia Commons

[ThTh1] In 1994, Comet Shoemaker-Levy 9 passed a little too close to the planet Jupiter. It was first shredded by the massive planet’s tidal gravity and then, one by one, the pieces smacked into the surface, creating titanic explosions, the largest of which packed a wallop of six million megatons of TNT.

While that spectacular display was unusual, it’s probably not that rare for Jupiter to get hit by asteroids. It is, after all, the largest planet and close to the asteroid belt. Over the last few billion years, it has swept its region of space fairly clean. But there’s still stuff out there. And Jupiter occasionally get a (brief visitor).

It looks like Jupiter got hit again this week. An amateur astronomer captured a brief flash of light on the surface:

Impact on the planet Jupiter.

Follow-up images show no visible scar on the surface — previous impacts would dark patches from the ignition of gases in the Jovian atmosphere. So, this was probably a small asteroid, not big enough or just not at the right angle to penetrate the deeper atmosphere. But as ever more telescopes get turned to the heavens, we will see more and more events like this.

We live in a dynamic universe. It’s nice, once in a while, to get a clear reminder of that.

[ThTh2] Color me very skeptical that science can bring the wooly mammoth back from the dead.

[ThTh3] This thread is about a preprint but the results dovetail with a growing consensus about boosters and waning immunity. The short version? The vaccines still work. Immunity does wane but mostly for the elderly and those with severe co-morbidities. It is therefore those groups who would benefit the most from boosters. Also, the data continue to support the idea that a longer interval between the two shots of Pfizer and Moderna confers better long-term immunity and resistance.

[ThTh4] Would you really want to take an interstellar trip when the Sun is at maximum activity? Maybe

[ThTh5] Moderna is at work on a combo vaccine that could protect you from COVID, flu and RSV. And an experimental cancer vaccine is beginning trials. And a new Ebola virus vaccine is looking good. It can be given to children as young as one.

[ThTh6] Accurate. All it needs now is a branch for astrophysics.

[ThTh7] I’ve said before we’ll have to think of a smart way to deal with pollution from livestock. I didn’t think that solution might be potty training.