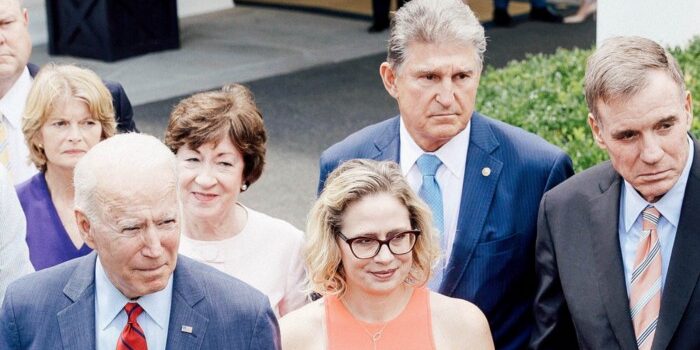 President Joe Biden with a group of senators including Joe Manchin and Kyrsten Sinema. Source: Slate

With one word, Joe Manchin threw a wrench into the plans of congressional Democrats last week. He announced that he wanted a “pause” on Democratic negotiations over a $3.5 trillion reconciliation bill to enact the president’s agenda. This announcement reflected Manchin’s general uneasiness about the bill’s high price tag. It also greatly frustrated liberals who have been vexed by Manchin’s hostile attitude towards the policies of his own party. As Jonathan Chait argued last week in New York, “the signal Manchin is sending is worrisome. For the first time, Biden is staring at the plausible vision of a failed presidency.”

There has been a nauseating amount of debate about how Joe Biden’s political agenda will be implemented. Liberals and moderates go back and forth on what will be the best approach. Those on the left want Biden to go big, pass two significant bills funding traditional and human infrastructure, and then pair those achievements with a number of structural reforms designed to aid Democrats in future elections. Moderates want to stick with the traditional infrastructure plan and perhaps a limited reconciliation bill with an eye on inflation and the whims of Republicans. Both sides believe that their approach will be the one that will best protect Democrats in the next two elections and beyond.

Debates about the ideal set of policies and proper strategies are important for setting the long-term focus of the party. But now and over the next three years, they are somewhat irrelevant. Pleasing the master moderates of the Senate is the top goal of any Democratic policy approach. Senate success, not elite wrangling or the complaints of donors, will do more than anything to determine the future trajectory of the Biden administration.

Control of the Senate has given Biden his greatest successes so far. It has allowed the president to seat his cabinet and a number of judges. Senate control has also helped make the administration’s signature $1.9 trillion coronavirus relief package law. No Republican Senate would have enabled such a package to be enacted under a Democratic president. The Senate is what allows Biden to implement his party’s theory that government spending is helpful to the country and its future. As events in Afghanistan have shown, he is only nominally in control of events connected to the nation’s foreign policy. Executive orders can go a long way but will mostly be overturned under the next president’s administration.

Joe Biden’s next two big laws, the $1 trillion bipartisan infrastructure bill and the $3.5 trillion budget reconciliation spending bill, are key to his political future. They will allow Biden to notch two more victories while he is still in control of a fleeting governmental trifecta. In order to get through, they must win the support of all 50 Democratic senators. Therefore, moderate senators such as Kyrsten Sinema and Joe Manchin must be satisfied. They will not be successfully primaried in the next six months. The public has shown no desire to storm their offices or march to change their minds. The bully pulpit will only go so far, especially against a red state senator like Manchin. Sinema and Manchin must receive whatever will sway their opinions on these bills within reason. The rest of the party may have to accept painful cuts or an additional regulation that pleases no other member of Congress except those from West Virginia and Arizona.

Liberal commentators have pushed back on this Senate-centric interpretation of the Biden administration’s fate. They have argued that the House wields a significant amount of power in the process. Nancy Pelosi’s House majority is tight. The defection of a few left-leaning representatives could tank both the Senate-approved infrastructure bill and Biden’s reconciliation plan. But there is no evidence or precedent for House Democrats defecting. House Democrats in the 21st century are not the Tea Party Republicans under John Boehner or Paul Ryan. As one of the strongest Speakers in modern history, Pelosi can be trusted to deliver her entire delegation. Moderates know this and have made their demand accordingly.

The government of the United States should not be determined by the whims of two moderate senators. Ideally, the two parties should work together to find common ground when the Senate and House are as close as they currently are. Blocs should form that allow for a number of senators to engage in trading and compromise. But with the exception of the infrastructure bill passed earlier this year, today’s hyperpartisan world does not allow for such flexibility. It is a world where a large percentage of Joe Biden’s agenda really does rest on the shoulders of two senators. Democrats can plan and strategize and hope for the day when they are not held hostage by their moderates to cut spending or include favors for Arizona or West Virginia. But at this time, they really need to give Sinema and Manchin at least some of what they want.