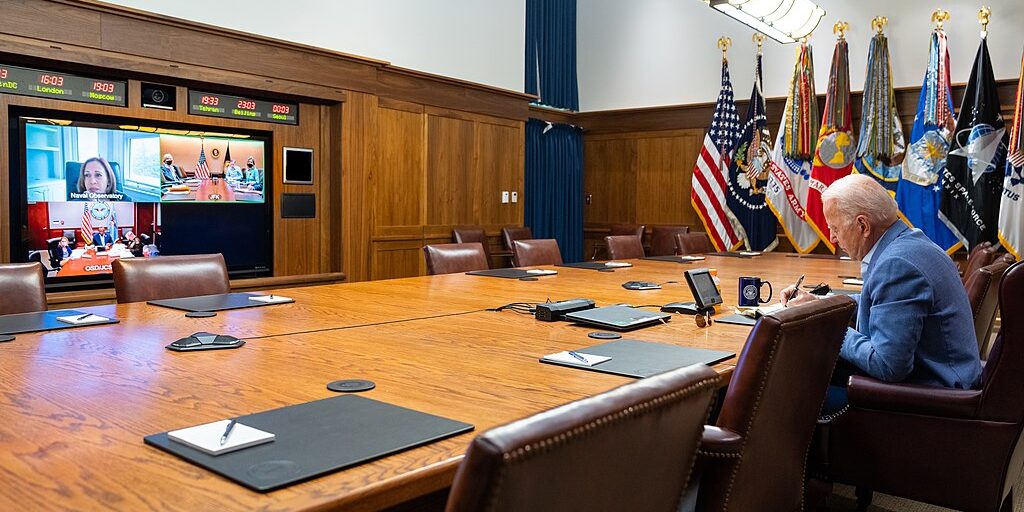 President Joe Biden and Vice President Kamala Harris held a video conference with the national security team to discuss Afghanistan. In addition, the President and Vice President were briefed on the earthquake in Haiti. Camp David,
14 August 2021. Photo by The White House, Public domain, via Wikimedia Commons

The disjointed and, frankly, lackadaisical public response of the Biden Administration to the events in Afghanistan begs some questions. With the president not taking any questions other than a sit down with George Stephanopoulos, it’s falling to various officials to face the press.

But first that Stephanopoulos sit down. To be fair here, these are clipped by ABC as promotions (full clips and transcript available here) and is not the full version, but this line of reasoning pretty much has been the president and his team’s position since the evacuation started:

EXCLUSIVE: Pressed on whether the U.S.’s exit from Afghanistan could have been handled better, Pres. Biden tells @GStephanopoulos, “The idea that somehow, there’s a way to have gotten out without chaos ensuing—I don’t know how that happens.” https://t.co/mH1AyWI5lb pic.twitter.com/giTMWCuub5

Once again, the president defends any criticism about the handling of the failure of Kabul and the frantic effort to evacuate to the Kabul airport as unavoidable, pointing out there was going to be chaos when America pulled out regardless of when that was. That last part is inarguably true. The first part is a dodge, and one the president is using again and again. The inevitability of chaos after we left — something we cannot control — does not in any way mitigate mistakes made or make any questioning of how the US and allies handled the run up to that leaving — something we could control — invalid. The fact that there was a mad scramble, that Americans and their allies are not secure at the airport, and that the airport security situation is reliant on the Taliban behaving themselves all scream out the planning was insufficient. Pointing out the failures of the last twenty years of policy doesn’t give the current president a pass from criticism for his handling of Afghanistan during his seven months in office. A seven months in which he, by his own admission, knew a time like this was coming.

As to the speed of the collapse in Afghanistan, Gen. Milley took that one from the podium.

Gen. Mark Milley says “the intelligence clearly indicated multiple scenarios were possible” in drawdown of U.S. troops in Afghanistan, adding: “There was nothing that I or anyone else saw that indicated the collapse of…this government in 11 days.” https://t.co/85JfnhdhGJ pic.twitter.com/BQKqJFgYmn

That’s a very carefully worded, very specific answer. It comes off like a parent awaking in the morning to find the last brownie eaten, and when questioning a child what happened over night and did they know about the last brownie they answered, “There was no way I or my siblings could have known that a brownie was eaten at 2:45am”. That wasn’t answering the question, but you gave a specific answer that is technically correct to make it sound like it was. If internet nobodies like me were pointing out in June the Taliban was sweeping through the country, for the US command structure to say they didn’t know is either epic incompetence or a lie. Or a coverup for either. Or a combination of both, authored by folks in the chain of command, meaning the Milleys of the administration can’t or won’t say out loud which it is.

Speaking of saying things out loud, Secretary of Defense Lloyd Austin said something out loud that, after sleeping on it, is more and more bothersome:

Reporter: “Do you have the capability to go out and collect Americans?”

Defense Secretary Lloyd Austin: “We don’t have the capability to go out and collect up large numbers of people” https://t.co/euK8G9Skz3 pic.twitter.com/aTQKOQeT1Q

Again, most of the things he is saying are inarguably true. The secure perimeter of the Kabul runway is the only thing keeping this embarrassment from turning into a full-blown disaster with a body count. So far, the Taliban has kept their fighters in line, and the American and allied forces seem to have the airfield itself back under at least nominal control from the mess we saw on Monday. Long may it last, but this is a dangerous situation with a lot of potential to go wrong. The United States shouldn’t have our forces in this vulnerable position a moment longer than absolutely necessary.

But it’s that “capability” phrasing that really sticks out here. All due respect to Secretary, and retired 4-star General, Lloyd Austin but what the hell is he talking about? Of course, we have the “capability” to go get our folks who are in the city and elsewhere if we wanted to. Clearly, a decision has been made that we are not going to do that, probably correctly thinking it would take the paper-thin security situation between the Taliban and US forces from knife-edge to bloodshed. “Capability” sure came off there as reflexive command speak from the long-time soldier turned administration official. The military’s “capability” here isn’t an ability to perform the task; it is having been told they are not going to do so. Of course, Secretary Austin can’t say that at the podium, so in the best Crash Davis tradition of How To Do A Press Conference he leaned on his old clichés to say lots of meaningful sounding words without saying what they really mean.

The feel the American public is getting from the Biden Administration is one of being told one thing while another thing is clearly going on. It is very evident both in what is being said, not being said, and in the administration’s handling of the Afghanistan crisis with a shocking lack of a sense of urgency that there has been a deal struck with the Taliban, and all other plans hinge on the Taliban honoring that deal and letting America and its allies leave in relative peace. The Biden Administration that spent most of the summer prior to this past weekend wanting credit for making the hard call on Afghanistan, should level with the American people and our allies what that deal consists of, why it was necessary, and what we promised them from our end in return.

Maybe such a deal was the best option of a whole lot of bad ones. But for the Biden Administration that looks like it’s doing a lot of hoping, wishing, and scrambling where planning should have been, it’s only going to raise more and more questions. If somehow America gets out of this crisis without a loss of life, the American people will probably lose interest and move on. But with even our closest allies criticizing American leadership in the Afghanistan evacuation mess, the effect will be felt for a long time whether talked about domestically or not.