The Poster Children For The Bad Public Defender Stereotype 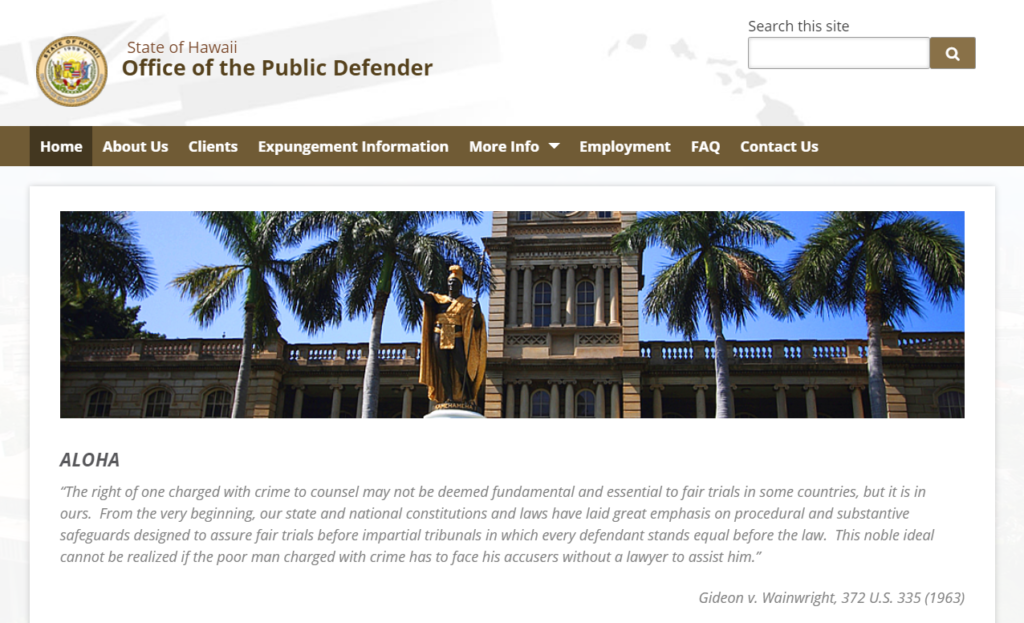 Public webpage for State of Hawaii
Office of the Public Defender

Public defenders have an undeservedly bad reputation. In a system in which those with resources are fairly perceived to have an advantage, “public defender” is synonymous with “bad lawyer”. But those of us who have practiced criminal law know that isn’t true. Most public defenders are dedicated to the ideals of our constitution, protecting the rights of the accused against the power of the state. The pay is paltry, the work is grueling and often thankless, and those who have decided to dedicate their careers to it do so out of a desire to make a difference. They are the experts, among the most knowledgeable and competent attorneys in their field.

But every now and then, you find one that could be the poster child for the bad public defender stereotype.

You may have missed this story: A homeless man was arrested in 2017 as he slept on a sidewalk outside of a foodbank. The police thought he was Thomas Castleberry, a man with an 11 year-old drug warrant. The man insisted that was not his name, that they had the wrong man.

Yeah, sure buddy. That’s what they all say.

Except he was telling the truth. He wasn’t Thomas Castleberry; he was Joshua Spriesterbach. He tried to tell them, but the harder he protested the less they believed him. He was so adamant about his identity that the authorities thought he must be delusional.

They could have run his fingerprints and realized their mistake. They could’ve looked up Mr. Castleberry and discovered that he was in prison in Alaska at the time they took Spriesterbach into custody. They could’ve investigated the crime charged in the warrant for which he was arrested and proved easily that Spriesterbach was not on the island where the crime was allegedly committed back in 2006. They could have simply compared photos of the two men and realized their mistake. They didn’t do any of that. Instead, the system committed him to the Hawaii State Hospital, where he remained for nearly 3 years.

No one should be surprised that the police and prosecutors didn’t go out of their way to investigate this man’s claims of innocence. It is a rare prosecutor, and an even rarer cop, who is willing to entertain the idea that they might have made a mistake, but one would expect the public defender assigned to him to have looked into it. All the PDs I know would have done at least a bare-bones investigation of their client’s claims. And that’s all it would have taken.

A lawyer is more than just a mouthpiece for their clients. We do not have to accept whatever they say as the truth without any due diligence, nor do we have to make representations to the court if we know them to be false — in fact we are prohibited from doing so. But we do have to listen to their stories, and we should make at least a cursory attempt to find evidence and support for their claims.

Back when I still practiced criminal law, most of my clients were court appointed. I was not a public defender, in that I was not employed by the public defender’s office. I was what they called a panel attorney: a private practice lawyer who has volunteered to be on an appointment list for indigent defendants for times when the public defender’s office was overloaded or had a conflict of interest. It was low-paying, exciting, rewarding, heartbreaking work, and some of the most important I’ve done in my career.

My case load was much lighter than the average full-time public defender’s, but it was time consuming. All criminal defense work is time consuming, if done well. It’s easy to just go with the flow of the system, where many days in court are cattle-calls and cases are disposed of as if by rote. You learn to anticipate just what the plea offer will be based on the charge, the client’s history, and the prosecutor. Filing motions, having actual hearings, actually having jury trials are the exceptions, especially with less serious charges in lower-level courts.

It’s easy to become jaded. All of your clients have stories to tell, and few are immediately forthright with their lawyers about their culpability, if any. I once had a client who steadfastly proclaimed innocence and demanded DNA testing. I began drafting the motion. When Joshua Spriesterbach told his lawyer he was not Thomas Castleberry, the lawyer had a duty to vet his claim. It would not have been difficult. There is no record that any such inquiry occurred. Instead, Spriesterbach was committed, a process which almost certainly would have required the involvement of his counsel.

Our clients lie sometimes. Frequently, even. Before I filed that motion for DNA testing, I called my client to let him know it was ready and go over it with him. I also told him that he should understand that the results could be used as evidence against him, if they turned out to implicate him. After a deep breath and few beats, he told me not to file it. Instead, he asked me if I could possibly get him probation. But Joshua Spriesterbach should have had the opportunity to prove his story, too. Yes, it is the burden of the government to prove guilt, but when this man was so adamant about his identity that he was institutionalize as delusional, just the smallest bit of work by the public defender on Spriesterbach’s behalf could have saved him nearly three wasted years of life.

Aren’t the prosecutor, the police, and the court to blame? Of course they are. All have a duty to seek justice. But the defense attorney’s job is to protect his client’s rights, not be the arbiter of what’s true and what isn’t. There is a difference between perpetuating a falsehood and advocating for your client’s version of events. Maybe these lawyers were new, overworked, overwhelmed, or underqualified. Maybe burned out. I understand burn out — it’s why I no longer do that kind of work. None of this excuses the utter failure of a public defender to do even the most basic work for their client.

Spriesterbach finally found a psychiatrist at the hospital to listen, and the truth was revealed. We don’t know what the court, prosecutors, police, or Spriesterbach’s lawyer have to say about this; the court records do not acknowledge or address the mistake. It’s a good bet his lawyer will face consequences professionally, as they should.

As for Mr. Spriesterbach, I hope he receives compensation for this travesty, and can build some semblance of a decent life from it.