Mandatory Vaccination? In THIS Country? 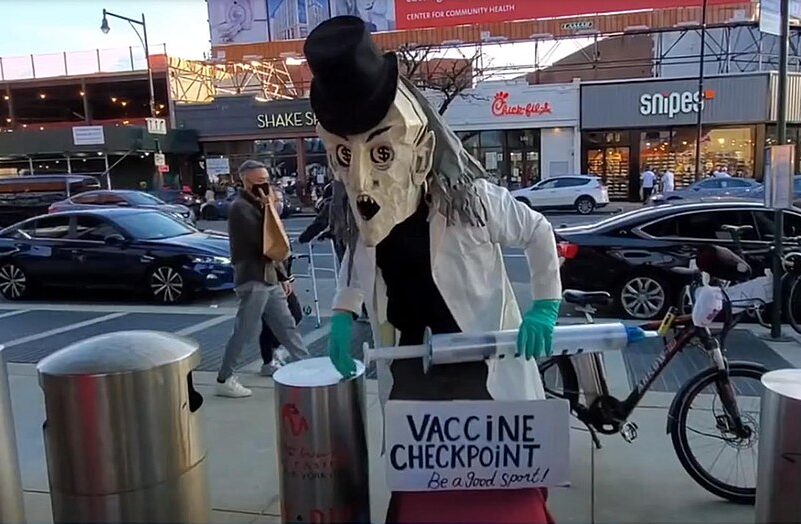 New York Liberty Coalition speaking out against mandatory vaccine passports at Barclays Center in Brooklyn, where no one was allowed in to see the basketball game without proof of vaccination. Photo by Felton Davis, CC BY 2.0 <https://creativecommons.org/licenses/by/2.0>, via Wikimedia Commons

I’ve already written about Jacobson v. Massachusetts over a year ago, but our managing editor here at Ordinary Times is a harsh master, so here we go again.

Jacobson is the 1905 Supreme Court case which held that the government has a right to mandate vaccinations. The disease at issue was smallpox, and the petitioner had been fined $5 (roughly $158 in today’s money) for his refusal to receive an inoculation or allow his child to receive one. His reasoning was the bad reaction he’d had to the vaccine as a child. Failure to comply with the mandate was a criminal charge, subject to the fine he received and possible confinement (Jacobson was confined while he refused to pay.)

According to settled principles, the police power of a State must be held to embrace, at least, such reasonable regulations established directly by legislative enactment as will protect the public health and the public safety. [Citations omitted.] It is equally true that the State may invest local bodies called into existence for purposes of local administration with authority in some appropriate way to safeguard the public health and the public safety. The mode or manner in which those results are to be accomplished is within the discretion of the State, subject, of course, so far as Federal power is concerned, only to the condition that no rule prescribed by a State, nor any regulation adopted by a local governmental agency acting under the sanction of state legislation, shall contravene the Constitution of the United States or infringe any right granted or secured by that instrument.

There is, of course, a sphere within which the individual may assert the supremacy of his own will and rightfully dispute the authority of any human government, especially of any free government existing under a written constitution, to interfere with the exercise of that will. But it is equally true that, in every well-ordered society charged with the duty of conserving the safety of its members the rights of the individual in respect of his liberty may at times, under the pressure of great dangers, be subjected to such restraint, to be enforced by reasonable regulations, as the safety of the general public may demand.

The Court conceded that the statute may have been inapplicable to an adult who could prove themselves unfit to receive a vaccination without suffering significant harm, but Jacobson did not present any evidence to satisfy the Court that the vaccine was a danger to him. The evidence Jacobson presented consisted mainly of the theories and opinions of a handful of medical professionals who believed the vaccine to be dangerous, but the Court noted these opinions to be overwhelmingly in a minority, and instead accepted as fact that the smallpox vaccine was safe and effective.

For obvious reasons, the Jacobson decision is being debated a lot recently. The case remains good law, and has been revisited several times in the intervening 116 years. As schools are set to resume, mostly in person, one particular progeny of Jacobson is especially relevant. In Zucht v King in 1922, the City of San Antonio, Texas, had in place an ordinance prohibiting unvaccinated children from attending school. The plaintiff claimed violation of due process and equal protection, an sought an injunction against the ordinance and a writ of mandamus allowing her to go to school. She lost at every level in the lower courts, and a writ of certiorari to the Supreme Court was denied. The lower appeals court issued a writ of error, 1 on which the Court issued its ruling. Citing Jacobson, the Court found the San Antonio statute valid. Further, the Court rejected the family’s claim that the ordinance was unnecessary because there was no instance of smallpox in town, and that the student had been deprived of liberty without due process. The Court said that this claim did not impugn the validity of the statute, or the authority of the officials who applied it, and as such was not a claim that the Court could hear. The Court conceded that a claim of unconstitutional application of a valid statute is a matter the Court could hear on writ of certiorari, but not on a writ of error.

Through the years, Jacobson has been cited to support the use of state power in several cases. It was invoked as an underpinning in the notorious Buck v Bell case which upheld mandatory sterilization of the intellectually disabled, in a case involving restriction of child labor (Prince v Massachusetts), and a case permitting random drug testing of students (Vernonia School District v Acton). Thus, Jacobson is still good law and controlling precedent, and the case upon which those who advocate Mandatory Vaccination for Covid pin their hopes.

On one hand, mandatory vaccination is not a new thing. Every state in the US requires children to prove immunization in order to start school, and boosters as needed at various points. Diphtheria, tetanus, pertussis (the DTAP), hep-b, chicken pox, measles, mumps, and rubella are all diseases for which states mandate vaccination for public school children. Exemptions are available to varying degrees, depending on the state; some states permit no-questions-asked philosophical exemptions, while others only permit religious or medical exemptions. My state permits only a medical exemption for mandatory vaccinations, and it’s exceedingly difficult to get.

Does this mean that mandatory vaccinations for Covid are coming for school children (once approved for their age group), healthcare workers, or even the general public? It is conceivable under the rubric of current laws and precedent. But there are some notable arguments to the contrary, not the least of which, in my opinion, is the newness of the vaccines and their emergency approval status. The FDA did not exist in 1905 – it was founded in 1906 – so the smallpox vaccine was not “approved”, either. However, it had been in use for over 100 years, having been discovered in the late 1700s. But like the smallpox inoculation, the overwhelming majority of medical experts believe the vaccines to be effective and safe. Not all, of course, but a majority, by far. Still, to require a person submit to a medical treatment that is still in the “experimental” phase seems problematic on its face. 2

There is also the “Covid ain’t so bad, most of the time” argument by those who would cite the survival rate. Smallpox, in contrast, killed about 30% of those who became infected. Even taking into consideration medical advancements that may have decreased mortality rates in the modern day, smallpox was a much deadlier scourge than Covid-19. The Jacobson court predated the disease’s eradication and would have been aware of its ravages. While the Court’s decision did not rest on the seriousness of the disease, it did discuss in footnotes the smallpox related mortality rates of vaccinated and unvaccinated populations. The Court also acknowledged debate over the efficacy of the vaccine, but sided with the lower court’s holding that public consensus was controlling:

In a free country, where the government is by the people, through their chosen representatives, practical legislation admits of no other standard of action; for what the people believe is for the common welfare must be accepted as tending to promote the common welfare, whether it does, in fact, or not. Any other basis would conflict with the spirit of the Constitution, and would sanction measures opposed to a republican form of government. While we do not decide and cannot decide that vaccination is a preventive of smallpox, we take judicial notice of the fact that this is the common belief of the people of the State, and, with this fact as a foundation, we hold that the statute in question is a health law, enacted in a reasonable and proper exercise of the police power.

It’s unclear whether our modern courts would give such deference to public consensus; it has struck down Covid-related restrictions in the name of religious liberty, a concern that admittedly occupies a place of the highest regard in the law. And it is not readily apparent, at least to me, that the “common belief of the people” is that vaccinations should be mandatory.

So, would Jacobson hold up to a mandatory vaccination for COVID-19? I don’t know, but so far no challenge to mandates for measles, mumps, rubella, pertussis, polio, or hep-B immunization has succeeded, except under certain circumstances as determined on a state-by-state basis. There is no reason to think that the Covid vaccine could not be treated the same.