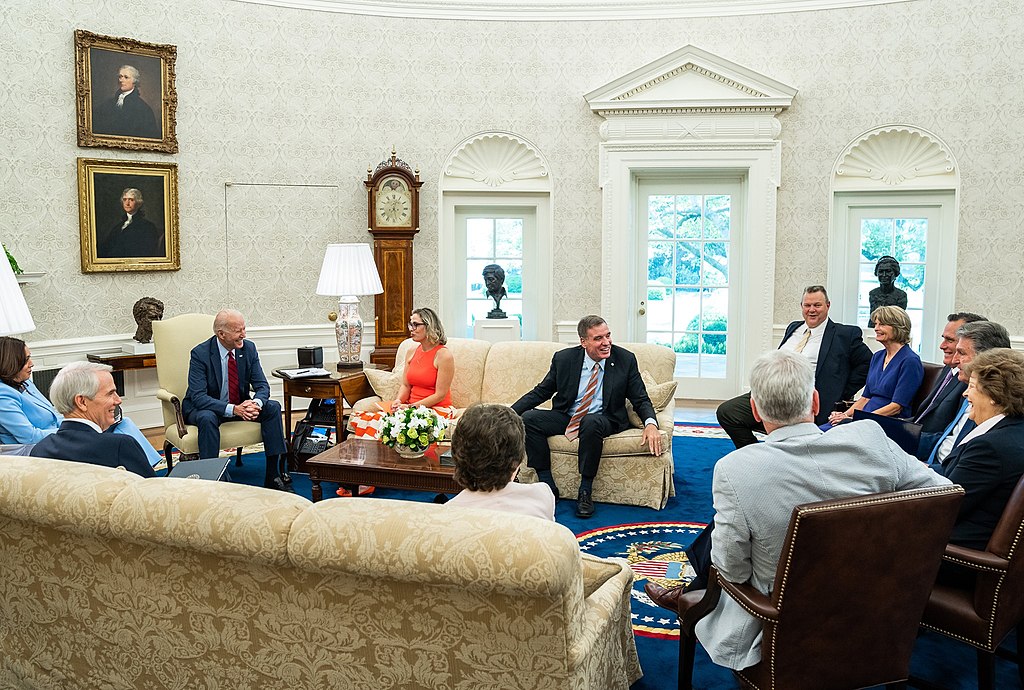 President Biden meets with US Senators about his infrastructure plan, 29July2021. Photo by The White House, Public domain, via Wikimedia Commons

After much hoopla and delay it might finally be Infrastructure Week! in Washington DC as the US Senate moved procedurally in the first step of passing the more than a trillion dollar infrastructure bill.

NPR has the details, sort of:

Hours after bipartisan Senate negotiators reached a deal on an infrastructure package, the chamber voted to advance it, setting in motion a final vote on the bill in the coming days.

The procedural motion was approved 67-32, with 17 Republicans joining all Democrats to begin legislative action. The top Senate GOP leader, Kentucky’s Mitch McConnell, was among those voting to move ahead with the proposal.

Earlier on Wednesday GOP Sen. Rob Portman of Ohio told reporters the group reached agreement on the major issues and was still working on legislative text. “We are prepared to move forward,” Portman said after the Republicans working on the deal met with McConnell.

Sen. Kyrsten Sinema of Arizona, who was leading talks for the 10 Democrats at the negotiating table, told reporters on Capitol Hill that “we are very excited to have a deal” and said that she had spoken with President Biden about it. Biden later told reporters he was “feeling confident” about the bill.

In an address Wednesday afternoon at a truck plant in Pennsylvania, Biden added that he was working with Democrats and Republicans on the deal because “while there’s a lot we don’t agree on, I believe that we should be able to work together on the few things we do agree on.”

The forward movement on the bill comes a week after a failed test vote on the deal, with Republicans saying Senate Majority Leader Chuck Schumer, D-N.Y., was moving too quickly.

The bill is expected to be around $1.2 trillion over eight years with roughly $550 billion in new spending, but details on key components were still being worked out. Some procedural steps still lie ahead before the final passage.

Republican Sen. Susan Collins of Maine, one of the 10 GOP lawmakers in the talks, said there is $65 billion for broadband deployment in the bill. She acknowledged “it has not been easy” to get a deal, “but we have reached agreement on the major issues.”

A White House fact sheet on the deal also outlines:

Portman said the bill is paid for, including using funds from combating fraud in unemployment assistance programs. The White House said it will also be offset in part by “targeted corporate user fees” as well as economic growth that’s expected from the investments.

The group is awaiting a final price tag from the Congressional Budget Office.

Sen. Jon Tester of Montana, one of the Democrats involved in the talks, told reporters that the final text has not yet been fully circulated, but he expects the final agreement will be completed Wednesday.

Sort of is required as a descriptor because the full final text of the bill isn’t written yet. In what is become the only way congress ever passes massive legislation these days, the actual language and details of the infrastructure bill will be made available only at the last minute before voting on it. At some point, we as a country should have an adult conversation about how trillions of dollars of wide-ranging legislation is pencil whipped through the halls of congress written by staffers, lobbyist, and — far too often — the beneficiaries of said legislation. But apparently that is not this day. This day, we finally have Infrastructure Week!

To be determined is the details of said infrastructure bill, and while talking points, facts sheets, and fancy info graphics will be a plenty, those don’t have the full force of the law behind them that the actual, written text of the legislation does. While parred down from some of the wilder estimates and desires for a big infrastructure package, this is still another trillion dollar-plus spending package, the latest in a string such outlays following several Covid-related relief packages. Expect the “what is infrastructure/is this infrastructure” debate to get another strong run over the next few days/weeks.

With the rest of the legislative agenda of both congress and the Biden administration ground to a halt, infrastructure was seen by most folks both inside and out of Washington to be the most likely place for some bipartisanship. Congress critters want to be able to run campaign ads and fundraising materials with a nice fat number preceded by a dollar sign to show the folks back hope something tangible they did to warrant a trip to the polls and another term. And while the Congress critters can be craven and silly, they are not stupid. They are looking at the calendar, seeing a looming mid-term next year, and noticing that with a 50-50 senate not much else is going to get done. Thus, Infrastructure! is going to be celebrated as the massive achievement in the only achievement currently possible it is. Already the cloak room whispers and hallway rumor mills are churning with a grudging admission that after this infrastructure bill, it might be a legislative wasteland until the end of the year.

Of course, the end of the year will bring the tradition of Government Shutdown Theater will offer an opportunity to slide some things through on the back of yet another self-created crisis, which will necessitate another massive slapdash bill(s), also passed without anyone actually reading it, because of the immediacy of the crisis of a calendar date that surprisingly sneaks up on congress every single year. Or so they say. The reality is, for our elected leaders, it is easier to just kick the can down the road, then emergency legislate at the last minute, than to do the hard work of leading year-round and preventing the emergency to start with. For this avoidance of the cliff they knowingly run full speed at on purpose year after year, we are to apparently praise them.

In the meantime, another congressional tradition — Failure Theater Kabuki — will resume, the time time-honored performative artform where senators and members of congress continually keep themselves appearing to be working so gosh darn hard on promised legislation that they know good and well isn’t going to pass. But the donors and base must be shown how hard they tired, and how they pressed towards the mark, but the goal was just. out. of. reach. and please send money, and vote for us again and we’ll get ’em next time for sure. The trick is of course to only do Failure Kabuki Theater in spurts, short runs keep the magic from fading you see, so look for about a six-to-eight week run of Failure Kabuki Theater while the stage for Government Shutdown Theater is set up.

But the looming Government Shutdown Theater debate and Failure Theater Kabuki of showing max effort for legislation congress knows isn’t going to pass is for after the joys and triumphs of Infrastructure Week! This week, six months into the legislative year, the highly compensated and elevated members of our congress will shower funds across the fruited plain and then bask in the glory of their great accomplishment before their long winter’s nap of gridlock begins as August starts for the rest of us. The hard work is done, and Failure Theater Kabuki of stringing donors and bases along that activity is accomplishment will resume between now and the commencement of Government Shutdown Theater sometime in September.

And thus we are governed, in the United States of America in the Year of Our Lord 2021.

With such bold congressional leadership like this, what a miracle it is that the Republic for which it stands stands at all.