It’s Infrastructure Week! This Time, Though, The Job Is Getting Done 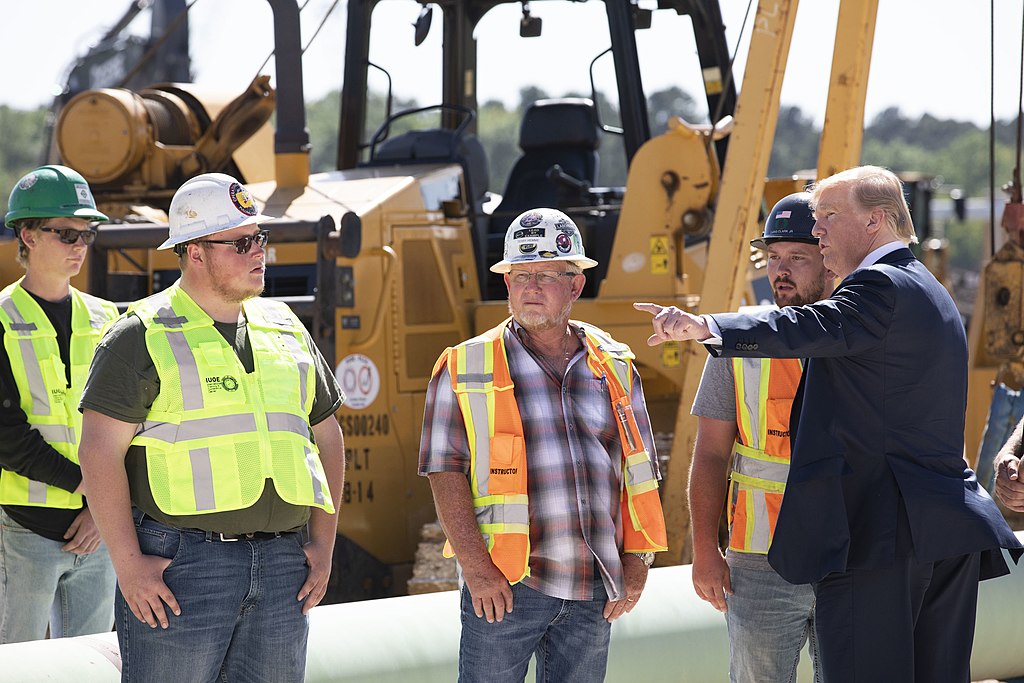 Photo by The White House from Washington, DC, Public domain, via Wikimedia Commons

Infrastructure Week! is back, with all the dread and deranged clowning we came to fear and loathe over the last half decade.

No, no, I’m not talking about what’s going on in the U.S. Senate. That’s not Infrastructure Week! It’s the closest thing we have these days to actual slow-boring-of-hard-boards governing. Give-and-take sausage making.

Infrastructure Week! of course was the running gag throughout the Trump presidency that any serious policy initiative administration officials dared to announce would be upended and drowned out by some crisis or madness emanating from the president himself. It became a byword for the shit show generally.

But like too much else from the wreckage of the Trump administration, it has taken on an ominous second life post-presidency. Completion of the new Infrastructure Week! is the prerequisite to Donald Trump officially declaring his candidacy for 2024. He declared his reelection campaign in January 2017, after all. The Republican field is frozen, his for the taking. Money is rolling in. What else could he be waiting for?

The ground is broken and paving is underway for the infrastructure he needs, but the road doesn’t go far enough just yet. Orange construction signs have popped up all over the country. In Michigan, the Republican canvassing board member who cucked himself by “following the law,” Aaron Van Langevelde, was demolished and upgraded to a loyalist who won’t buckle like a 60-year-old Interstate bridge.

Down in Atlanta, Real Americans are hard at work reshaping the Secretary of State’s office, including sending patriotic messages like, “You and your family will be killed very slowly,” to make sure eyesores like Brad Raffensperger know their place. A Trumpy Congressman, Jody Hice, wants to take Raffesnperger’s seat to eliminate any future weaknesses, like the rule of law. But just in case, the state Legislature seized election duties for itself and stripped the Secretary of State of power on the state election board.

The Georgia Legislature also cleared the way to intervene in elections that produce results it doesn’t like by allowing it to suspend local election officials and appoint new ones during the counting and certification process.

And they’re bulldozing ahead in Arizona, where a double-decker highway voting audit, which will both discredit any big-city election result and “find” “evidence” of “fraud,” is becoming a model for other states to follow. The Big Dig’s got nothing on this boondoggle.

The 2022 midterm will make sure the right crew is on the job. Currently, lowlife Democrats have a veto over Republican legislatures in the governor’s offices in Michigan, Pennsylvania and Wisconsin. Fundamentals are favorable to the out party in midterm elections down to the state level. Installing red-blooded Americans as governors in those states will expand Infrastructure Week! projects into critical states in 2023.

The biggest unfinished project is a new House in Congress. To borrow Senator Ron Johnson’s mad lib, the current one is infested with “liberal progressive socialist Marxists” who are obsessed with outmoded ornamentation like the will of the people and the peaceful transfer of power. History and gerrymandering, with a healthy dollop of disinformation and demagoguery for good measure, are on Republicans’ side for next year’s midterms, especially in the House of Representatives.

Building a good House requires a good foreman. Ha! No, it’s not Kevin McCarthy. Meet Speaker Elise Stefanik. She is bound to Trump, and him alone. Without his blessing, she wouldn’t have risen to House leadership. Any power or authority she has going forward will be directly owed to her boss. She won’t turn on him because he made her, and she has nowhere else to go. If the plans say reject the Electoral College, she’ll make it so. A wholly owned and operated company woman.

Trump’s runway to the White House depends on the success of these infrastructure projects, the infrastructure to intervene in a presidential election and to reject unfavorable results, change slates of electors, and sow enough chaos and uncertainty that he can throw the election to the House of Representatives and make a grab no matter what the popular vote, or even the Electoral College, tally is.

When he’s satisfied enough avenues are available in key states, and that he has control of at least the House, he’ll announce his candidacy. The real steal won’t be making it harder for minorities to vote. Trump isn’t sitting down in Mar-a-Lago poring over polling and counting margins. He’s watching canvassing boards. He’s hot for these bogus audits that will discredit big city elections and lay the groundwork for justifying state-level interventions between Election Day and Electoral College Day in 2024. He’s making sure enough legislatures won’t have the excuse to say something disloyal like, “We have to follow the law,” because either the people will have changed, or the laws. Or both.

Infrastructure Week! may wrap up by this time in 2023, and Trump 2024 will be there to cut the ribbon.

Val Heath is a former investigative journalist living and writing in Boston with his family. Currently, he is a communications professional while finishing a master’s degree in economics. He did not learn how to make sourdough bread during the pandemic.