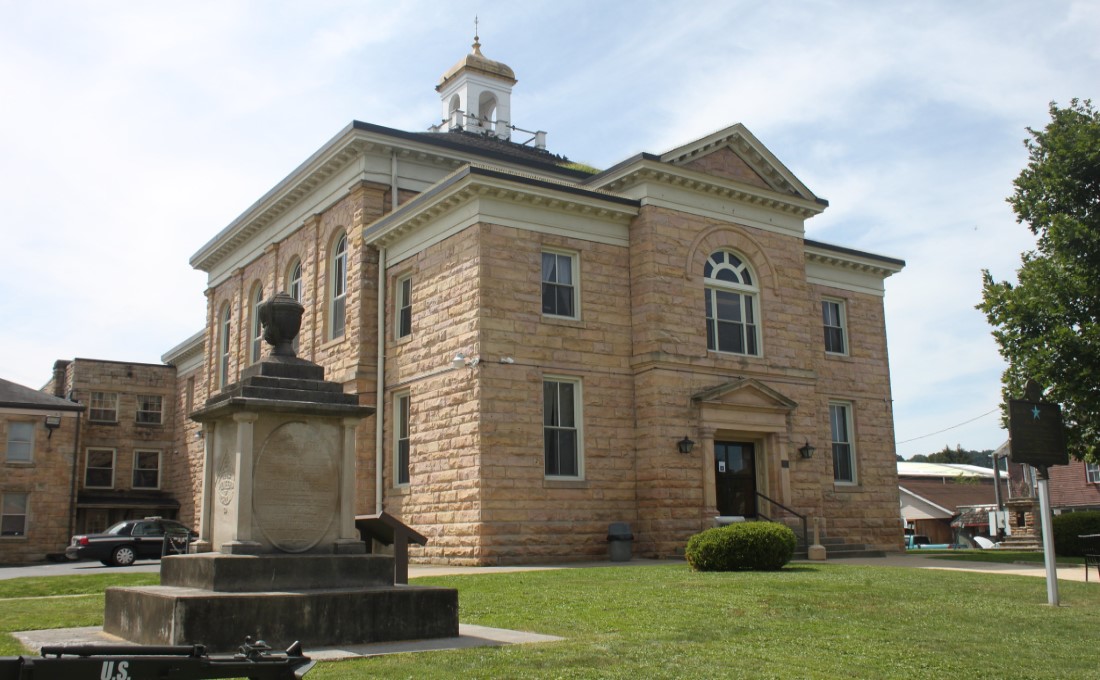 Some news stories just hit close to home. This news story on the opioid crisis is about my home.

For West Virginia Public Broadcasting, Emily Allen contrasted two different legal proceedings in two different courtrooms in West Virginia. In Federal Court in the state capital of Charleston, Big Pharma is on trial for their part in the opioid epidemic that has deluged the mountain state for years now. An hour and a half away in the center of the state, the Nicholas County Courthouse saw a much different proceeding:

As a judge Callaghan couldn’t speak about the federal trial in Charleston, but he spoke at length about the difference he thinks family treatment court programs are making in the state’s struggle with addiction and the separation of families.

“Before treatment courts, the only thing we had was law enforcement, and probation,” Callaghan said. “There was some rehab, but not a whole lot. But now, after treatment courts, we have a new way to try to solve the problem.”

Callaghan said he invites any interested counties to his courthouse to observe the process, and that it’s not a program that a county can build overnight.

One of the tenets of family treatment court is regular contact between parents and their children, through supervised visits, phone calls and eventually reunification.

But for most of Nicholas County’s first graduating class, these interactions were stifled last year by the coronavirus pandemic, which temporarily halted in-person visitations and closed the courthouse.

“We just did what we could to make it happen,” Pettijohn said. “There was a lot of FaceTime. We did a lot of Zoom visits … And when we were able to open up and start visits again, I think those visits were all the more meaningful for the kids and their parents.”

Throughout lockdown, the court itself still maintained consistent contact with parents. They regularly visited the Nicholas County Day Report Center, and Family Treatment Court Coordinator Stephanie Smith still conducted in-person visits with participants every week, even if those meetings had to be outside.

Smith said that she and her team will continue to support the families they help, even after graduation.

“When we call this their safe place, their support system, I mean, it’s not just like a nice thing to say at the end,” Smith said. “It really is still there for them.”

I know that courthouse well. The day after the much newer and fancier Robert C. Byrd Federal Courthouse that now dominates the Charleston skyline was dedicated in 1998, I went up the steps, down the hall, and to the clerk’s office to register to vote for the first time on my 18th birthday in the much older Nicholas County Courthouse. That window was right down the hall from the Sheriff’s office where my father still goes to this day to pay his taxes in person “just so they don’t mess it up.” Upstairs, my Aunt June served for many years as the Circuit Clerk for the court that Judge Callaghan now presides over. Across the street was Bill’s Barber Shop where you could get a haircut if you could get Bill and Royal to stop talking politics long enough to cut hair.

If you go down Main Street from the courthouse, hang a left onto Broad St at the Callaghan & Callaghan law office from which the judge came, you come to the Nicholas County Day Report Center. In my youth it was a Heilig-Meyers furniture store. For the better part of 20 years now it’s been the checkpoint for folks stuck in the no man’s land between incarceration and freedom. The authorities needed a lot of space, you see, to put all the people entering but seemingly never exiting the system.

So, when someone wants to try something like the family drug treatment plans, I’m all for it. The numbers and statistics just make folks numb, so perhaps a better way to explain it is visually. 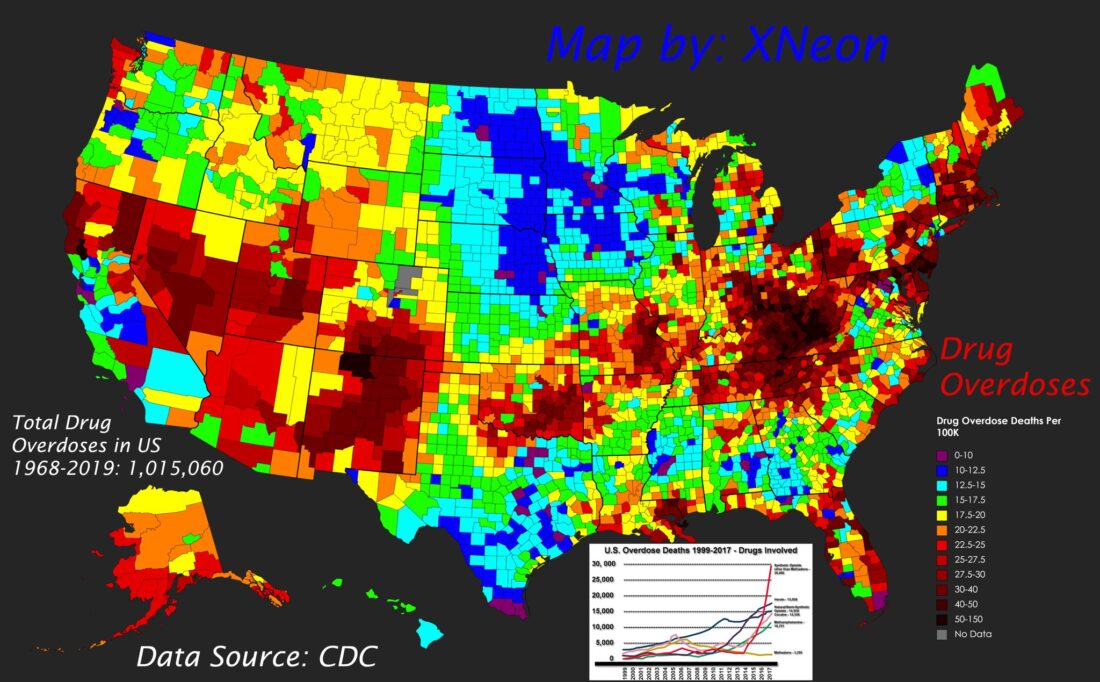 That black pit centered on West Virginia and Appalachia as if fate had dropped a nuke on it is glaring. Along with a few other areas of America, seeing a visual representation of so much death, so much needless, pointless death, ought to shock even the most cynical. But it doesn’t. There is no restitution for so many deaths, generational damage both physical and emotional to the people involved, or the lingering effects to what is in danger of becoming a lost generation in a state that can’t afford to lose any of its population. Not even a multiple zeroed judgement in the ongoing drug cases can “fix” the opioid crisis in places like West Virginia. Those looking for redemption to the opioid crisis in the marbled halls of the Robert C. Byrd Courthouse are going to be in for a disappointment, regardless the verdict.

But then upstairs in the Nicholas County Courthouse, and in similar programs, there are shafts of light shining through the darkness.

More than 180 adults had interacted with one of eight family treatment court programs in West Virginia by the end of April, according to the state Supreme Court of Appeals. By Thursday, 24 adults in five counties had successfully completed the program, including Johnson.

Johnson and her daughter were joined by four other Nicholas County families Thursday afternoon at the local courthouse. An area photographer had taken family portraits of the graduating families, and the framed results stood behind each participant as they accepted their certificates.

Five families don’t sound like a lot. It pales compared to the untold number of dead and suffering in the current pandemic. Five families aren’t even a rounding error to the billion-dollar drug companies. But it is five families not split up in a system so overloaded they cannot even remove children from homes unless there is an imminent threat anymore. Five families that won’t be at a graveside that afternoon lamenting what should have never been but now is permanently so. Five families that maybe, just maybe, can break the cycle of parents blowing up their homes with their own self-destruction that leaves craters in communities impossible to fill. Five families that, God willing and the creek don’t rise, will give their children better than they had, in decision making if not materially.

Five families might not sound like a lot. They won’t even statistically register in a model for a map on the horrors and human cost of the opioid crisis. But with the opioid crisis now reaching its tentacles into a third generation, we as a people need to just start getting some wins, somewhere, no matter how small, back on the board. A state like West Virginia, which is demographically bleeding to death, needs to treat each and every one of its residents as the endangered species they are rapidly becoming. We can realistically understand some folks put themselves beyond all help by their choices, but painting everyone with opioid abuse issues with a broad self-righteous brush of “junkies deserve what they get” isn’t going to cut it anymore. Maybe they do, but we already know that, and none of us are beyond reproach. And as our friends, family members, neighbors, parents, children, and hell just as human beings we have to do better than that when seeing these folks in crisis. “But by the grace of God go I” would be a better thing to think, and feel, and keep in mind, and try to rescue all we can even knowing we won’t get them all.

The opioid crisis has brought a dark and dusty sky upon places like West Virginia, and like all darkness it only abates one way. Shining light. Five families together again is more than enough of a light against the darkness, and a deserving one to be shown. And then we can get another light, and another light, and start beating back the darkness, until everyone willing and able can live up to the state motto, and even from addiction Mountaineers Are Always Free.