With COVID-19, the Global South Again Bears the Crisis Burden 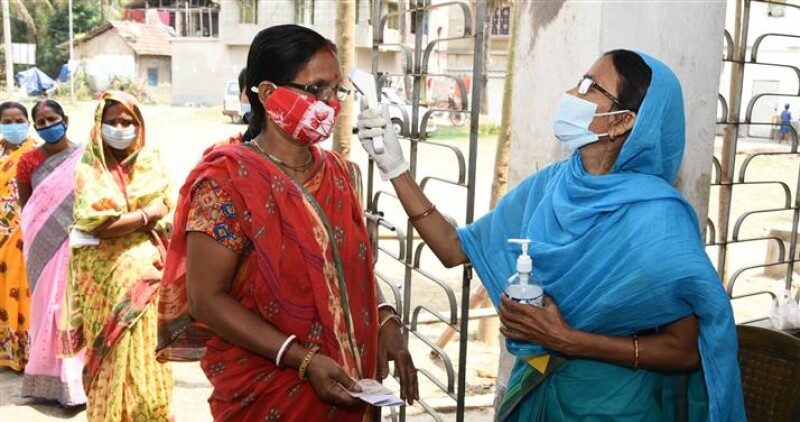 A volunteer conducting thermal screening of the voters, at a polling booth, during the third phase of the West Bengal Assembly Election, in Uluberia, West Bengal on April 06, 2021. Photo by Election Commission of India, GODL-India <https://data.gov.in/sites/default/files/Gazette_Notification_OGDL.pdf>, via Wikimedia Commons

I woke up Sunday morning to music, an instrumental ballad gently beckoning the day accompanied by the squeals of my excited pets. Cue the morning soundtrack: water running, keys jangling, sandals on pavement, the machinations of a coffee shop, the crunch of a croissant on a busy DC street, the crinkling of newspapers. And then silence. I’ve just been hurled out of my bubble by a headline: the New York Times reports India has again broken the world record with a reported 400,000 cases. There are no sounds now, just feelings. The tightness in my chest, the increasing pit in my stomach, the dizziness from inadvertently holding my breath. It’s never far from my thoughts, this constant reckoning of my sheer, dumb luck to be who I am, where I am.

We talk a lot about privilege. We talk about gender, education, sexual orientation, all of it. But the most visceral privilege for me has always been a factor before any of those could be supposed: I was born into a family capable of traveling the world and choosing the country to live in, away from the jenga tower of everyday traumas that would surely have been our lives had we been rendered immobile. This fact is never far from my thoughts but now it glared at me, in somber black print.

For South Asians in the United States, and Indians in particular, this is the soul-crushing reckoning happening in real-time. Most of us have been vaccinated, or have access to be, comforted by the sense we are moving farther away from the darkest days of the damage this pandemic. I am overwhelmed with gratitude for the systems and science that has afforded me some peace of mind but it is a short-lived peace, isn’t it, watching the grandmotherland go up in flames?

There are no words to fill this silence. What the quiet captures is the sense of those carefully curated atoms of our identity falling apart, the portal that was always there showing you what your life could so easily have been passing through you, leaving you with a more perceptive eye, a tuned ear and painful realizations.

I knew last summer South and Central Asia were not prepared. How could they possibly be, when the West was not? The world’s most densely populated region could not point to food or housing security, modern hospitals, general access to clean running water, news and information. In multi-generational houses, social distancing was a pipe dream and images of slums outside New Delhi, Karachi and countless other cities were the dream venues for new coronavirus strains. I knew better than to trust national estimates of new cases and death tolls. I knew it would be uglier than we would ever know. I can promise you the unknowable actual number is multiples higher than 400,000.

Compounding the grief is the cold response to India by the same systems that have sustained us. Wealthy countries have inoculated millions of their citizens but the vaccine inequities across the Global South are agonizing to witness. The term is a relatively new one, used to identify lower-income countries and was pitched as an alternative to the “Third World” and “developing countries” terms. It is not geographically applied; for example, most of the global south is South America but the term refers to countries working to industrialize and which have suffered a history of colonialism and/or imperialism by what we call the developed West. Consider the very developed countries are what they are at the expense of the impoverishment of most of humanity today. 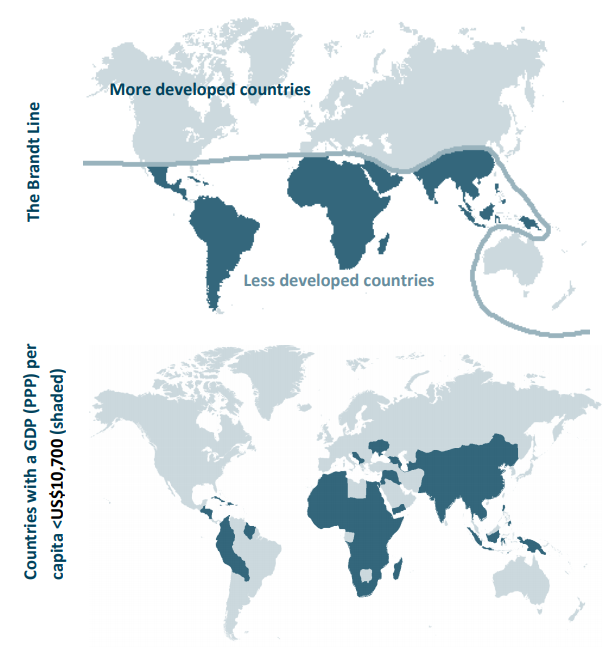 It just does not have to be this way. There is a duty to respond enshrined in global treaties for a reason. When it comes to the crisis at hand, it’s clear the United States and Europe have unreasonably limited vaccine production to a handful of companies struggling to meet the overwhelming demand while in Asia, Africa and Latin America factories are desperate for the work. It is hard to remain grateful for systems that bank every decision on power and not in critical moments, on global health. Russia has shared the blueprint for its Sputnik vaccine production with Brazil, India, Turkey and South Korea and that goodwill will certainly not be forgotten. The U.S. and Europe have far more to gain by sharing technologies and dismantling monopolies if we are ever to get out of a cycle of variants and wretched images of human suffering. Governments will need to recognize the benefits of patent-sharing and tap into the brilliance of scientists and manufacturers across the world. We need to bet on investing in people and we have the funding to make it happen.

In the first couple of years of my policy career, I found myself forced to view the South Asia region through a narrow definition of national security. It almost brought me to tears to see Pakistan offering its rival India all the help it could provide in this stark moment. Nuclear capabilities, terrorism and all-things-Afghanistan rule the political airwaves, but it must be incredibly hard to care about any of that when COVID-19 becomes the great equalizer.

We have asked the Global South to bear the brunt of nearly every crisis, from climate change to public health, but this is a chance to make some right calls. Opening the vaccine technology will bring this pandemic and images of pyres burning to an end and can potentially be the first meaningful step to addressing long standing geopolitical inequities driving this crisis. Those lives matter just as much as yours or mine.

All these thoughts crash into each other in the few minutes of a deeply uncomfortable silence. The hope is to emerge on the other side of the silence with an identity more bold, more generous, turning a fleeting moment into something a little more eternal. But words alone won’t cut it. Every conversation leading to significant change in just the last two years has been powered by a compelled and impassioned public. A Democratic administration keen on rebuilding American leadership across the globe should be held to a collaborative, people-over-profit standard and address the glaring inequity.

On a more personal note, if you can spare a moment to turn the tide back, here is a great list of resources doing critical work on the ground in India.

Saana Allie is one of those obnoxiously proud New Yorkers who needed a minute to consider Washington, DC home but it’s finally happened. Her passions are policy, politics, culture and about 47 creative projects she swears she will finish soon. Saana holds a Master’s Degree in International Relations and International Economics from Johns Hopkins University School of Advanced International Studies and also a pretty great TikTok account. She is most proud of having a 100% success rate sorting people into the appropriate Hogwarts House.