Adam Toledo Shooting: Watch It For Yourself 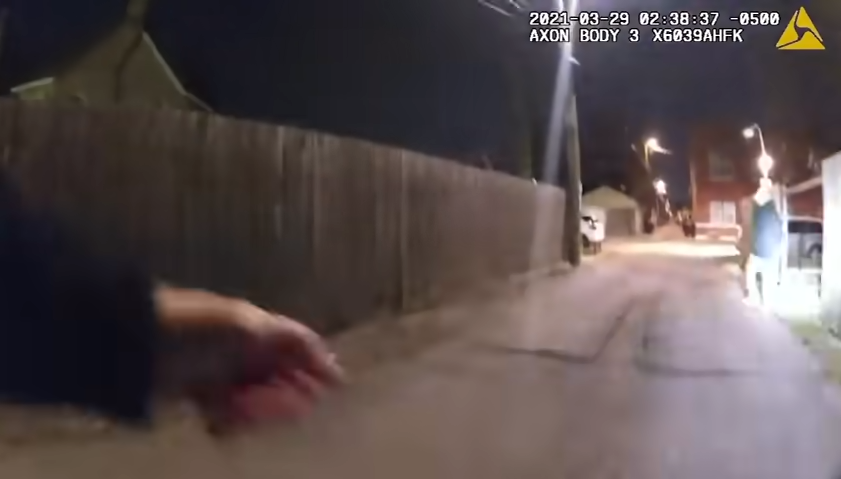 Bodycam footage moments before the shooting of Adam Toledo

Released body cam footage of the fatal shooting of 13-year-old Adam Toledo by police has once again brought viral attention to yet another officer involved shooting.

From the NY Times:

In the shooting in Chicago, which took place in the early-morning hours of March 29, officials have said that two officers were responding to reports of gunfire when they saw two people in an alley and started to chase them. Prosecutors have said that Adam was holding a gun when he ran down the alley as an officer called for him to stop and drop the weapon.

Adeena Weiss Ortiz, a lawyer for the family of Adam Toledo, said at a news conference on Thursday that Adam was trying to comply with the police officer’s orders to raise his hands when he was fatally shot.

“By now, all of you have seen the videos of Adam Toledo. They are especially moving, saddening, distressful, to see a 13-year-old boy shot at the hands of an officer. For those of you with children, you can relate to some of the pain that the Toledos are feeling today. Those videos speak for themselves. Adam, during his last second of life, did not have a gun in his hand. The officer screamed at him, ‘Show me your hands.’ Adam complied, turned around, his hands were empty when he was shot in the chest at the hands of the officer. If he had a gun, he tossed it. The officer said, ‘Show me your hands.’ He complied. He turned around. There’s a still photo going around on the internet with his hands up and he’s shot in the middle of his chest.” Reporter: ”Do you know yet if the officer had enough time to process that?” “I don’t know if the officer had enough time or not. All I know is that the officer is trained to not shoot an unarmed individual, not shoot an unarmed child. There are topics in the consent decree with regard to foot pursuits, training, et cetera. This needs to be addressed in this investigation. If he asked him to toss it and show his hands and the kid complies, then he shouldn’t be shot. The family was brought some solace and comfort to see the video of their son. They want justice for Adam and whatever that may entail. Obviously, Cook County state’s attorney is going to investigate this, and they will handle any repercussions in that regard, with regard to the officer who killed Adam.”

Adeena Weiss Ortiz, a lawyer for the family of Adam Toledo, said at a news conference on Thursday that Adam was trying to comply with the police officer’s orders to raise his hands when he was fatally shot.CreditCredit…Kamil Krzaczynski/Getty Images

“He tossed the gun,” she said. “If he had a gun, he tossed it. The officer said, ‘Show me your hands.’ He complied. He turned around.”

The key events took place in a matter of one second. In an analysis, The New York Times slowed down the police video, as well as another of the 21 videos released by the authorities.

As the officer, identified in police reports as Eric E. Stillman, 34, fires the single shot, Adam is raising his arms and appears to be empty-handed. In the moment before the shooting, The Times’s analysis shows, Adam can be seen holding what appears to be a gun behind his back, which he drops behind a wooden fence just before he raises his hands.

After firing the shot, Officer Stillman called for an ambulance, searched for the wound and began CPR with the help of another officer. “Stay with me,” he said to Adam more than once.

The Civilian Office of Police Accountability, an independent agency that investigates police shootings in Chicago, released the videos on Thursday after initial resistance to making them public, citing Adam’s age.

The Chicago Police Department had no comment on the video aside from redistributing its news release about the shooting from April 1, which called the loss of life “tragic” and said the department would cooperate with COPA, which is investigating the use of force.

A lawyer for Officer Stillman, who is white, said that the shooting, while tragic, was justified given the nature of the threat. “The police officer was put in this split-second situation where he has to make a decision,” said Timothy Grace, a lawyer at the firm of Grace & Thompson retained by the Fraternal Order of Police in Chicago.

Officer Stillman has been placed on administrative duties for 30 days; he joined the Chicago police in August 2015 after serving in the military overseas, his lawyer said.

As images of the shooting spread on social media, community activists and others expressed anger. Some said the officer had no reason to fire at the boy.

Watch the video for yourself along with reporting from ABC7 Chicago here:
WARNING GRAPHIC CONTENT