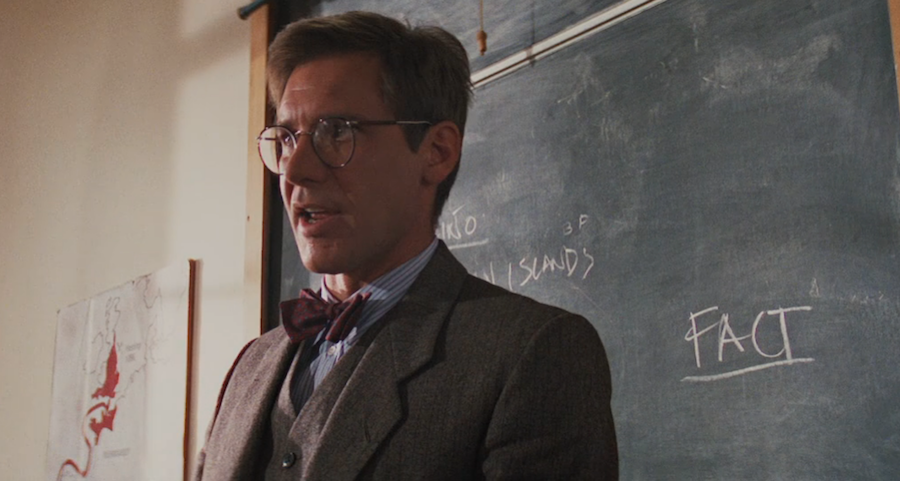 [ThTh1] Earlier this week, Neil deGrasse Tyson tweeted out this:

The good thing about Science is that it’s true, whether or not you believe in it.

I have a great deal of respect for Dr. Tyson. And I understand what he is getting at. But with all due respect, I disagree with the way he has chosen to phrase this. Because, in the immortal words of Indiana Jones, science is the search for fact, not truth. If it’s truth you’re interested in, Dr. Tyree’s Philosophy class is right down the hall.

The problem with phrasing science as “truth” is that…science is often wrong. Scientists are not magicians or seers. We get it wrong, and we get it wrong often. Sometimes because of personal bias. Sometimes because of bad data. But mostly because our understanding of the universe is and probably always will be incomplete. We view the universe through a glass darkly, our understanding limited by human frailty and technological prowess.

Consider the size of the Universe. At first, scientists though it was no larger than our Solar System. And they had the data to prove it — the stars didn’t change position as the Earth revolved around the Sun. But that was just a technological limitation. The change in the stars’ positions as the Earth revolves around the Sun was simply too small for astronomers to detect. It wasn’t until the 19th century that it could be measured.

A demonstration of stellar parallax — the method of triangulating the distance to the stars using Earth’s orbit as a baseline.

Then scientists though the Universe was the size of the Milky Way Galaxy. And they had the evidence to prove it — Van Maanen has shown the spiral nebulae could not be distant islands universes like our because they rotated too fast. But his measurement was in error. Then, for a brief time, we thought the universe was infinite. But then Hubble showed that the Universe was expanding.

Now we think that the visible Universe — the part where light has had time to reach us — is 46 billion light years in radius. And the entire Universe may be even bigger. But that’s coming into question as well.

None of our theories about the size of the Universe were “truth”. What they were was factual. They were the best estimates we could make at the time, given our understanding of physics and our ability to observe.

This is how science works. It is not a series of answers; it’s a series of questions. Our understanding of the universe improves. But it does not ever approach what I would call “truth”.

I’ve previously disagreed with Dr. Tyson on the utility of science when I disputed the notion of Rationalia. To quote myself:

The 19th/early 20th century progressive movement claimed to be the embodiment of rational, scientific thought. The scientific methods that had figured out the steam engine and the light bulb were going to be used to shape human society. They were an early version of Rationalia.

And what did they do? The embraced eugenics, which supposedly was supported by the Theory of Evolution. They embraced prohibition on the idea that they could scientifically perfect human society. And these tendrils of supposedly scientific thought snaked throughout the 20th century, manifesting in everything from claims that women were intellectually inferior, that Jews were subhuman or that homosexuality was a mental illness. All of this was supposedly backed by science.

The Soviet Union and its satellite dictatorships around the globe considered Marxism as proven as the Law of Gravity. They considered it so proven, in fact, that disagreeing with it was regarded a sign of mental illness. Lysenkoism also flourished in the Soviet Union, supposedly as the rational scientific alternative to Western pseudo-science.

Now we recognize these ideas as nonsense. But what other nonsensical economic and social ideas are being bruted about today as “scientific” that will one day prove to the result of bias and prejudice?

There’s a quote I fond of from another great science communicator — Carl Sagan — that I like to use in this context: “Science is a way of skeptically interrogating the universe with a fine understanding of human fallibility.” I like every part that quote: we are skeptical, we ask questions, we understand our limitations.

This can make science frustrating. Over the last year, science had jumped about quite a bit on aspects of the Coronavirus, for example. But it’s the best we’ve got. Winston Churchill once said that democracy is the worst form of government … except for all the others. I would steal that phrase to say that science is the worst way of learning about the universe … except for all the others. The beauty of science is not that it necessarily gives you the right answers; it’s that it’s damned good at telling you which are the wrong answers.

So, I get what Tyson is going for: that the universe is the way it is. It does not have to bend to your wishes and beliefs. But I would hesitate to describe science as “truth”. Because sometimes it isn’t.

[ThTh2] One of the issues that has come up during the COVID-19 pandemic has been the effects of shutdowns and social distancing on the populace. Specifically, critics have been predicting a wave of suicides and drug overdoses. We’re now getting the first hard data on the subject. Overdose deaths do indeed appear to be up significantly, although the reasons for this are a bit unclear. It may have more to do with support services shuttering than social isolation. Notably, the drug overdose rate spiked among Black people, which was unexpected. By contrast, while suicidal thoughts appear to be up, actual suicides were down. Our friend Dr. Katie Gordon dives into it here.

[ThTh3] The defense in the Derek Chauvin case is trying to invoke “excited delirium” as the reason for his death. Radley Balko explains that this diagnosis is largely garbage. Nor is it really a defense.

[ThTh4] For years, we heard stories about the so-called “EmDrive”. No, this has nothing to do with our own legal eagle and writer, Ms. Carpenter. The idea is that you could generate spacecraft thrust using electromagnetic waves inside a cavity, in violation of the law of conservation of momentum. Most experts though this was a measurement error. This now appears to be confirmed (H/T: Oscar).

[ThTh5] There’s been a burst of volcanic activity in Iceland, and it is producing some stunning video:

Some video from tonight in Iceland! Authorities extended the hours for people to hike in and stay past sunset so many people got to see the volcano at its most vivid. #Iceland #icelandVolcano #IcelandEruption #volcano #lava

[ThTh6] Earlier this week, Andrew noted a bowler who made a rare 7-10 split on television. Wired has a great video about why the 7-10 is so hard to hit and why the stats indicating that the “Greek Church” split is converted less often are misleading.

[ThTh7] One thing we’ve mentioned about the mRNA vaccines it that they have potential way beyond COVID-19. Andrew wrote earlier this week about the potential new flu vaccines. Related tech has produced an HIV vaccine that is looking very promising in Phase II trials.

[ThTh8] And here is a great story about the scientist who laid the groundwork for this revolution. About time she got the attention she deserves.

[ThTh10] My editors will just nod as they read this paper.

[ThTh11] For months, it’s been noted that reported COVID-19 deaths trail the actual number of excess deaths. As noted above, suicides are not up. Overdose deaths are, but they don’t account for the difference. One aspect may be a new and scary study showing that many COVID-19 patients that are discharged from the hospital are re-admitted within months and about one in ten die.

[ThTh13] Another new study confirms that dealing with global warming need not come at the cost of a wounded economy.

[ThTh14] I haven’t written in these pages about Alex Berenson, whose been one of the leading voices in the COVID “skeptic” wing. The Atlantic goes for it here, noting, as I have, that the sources Berenson cites frequently contradict his own claims.