Shin Godzilla: The King of the Monsters, Starting From Scratch 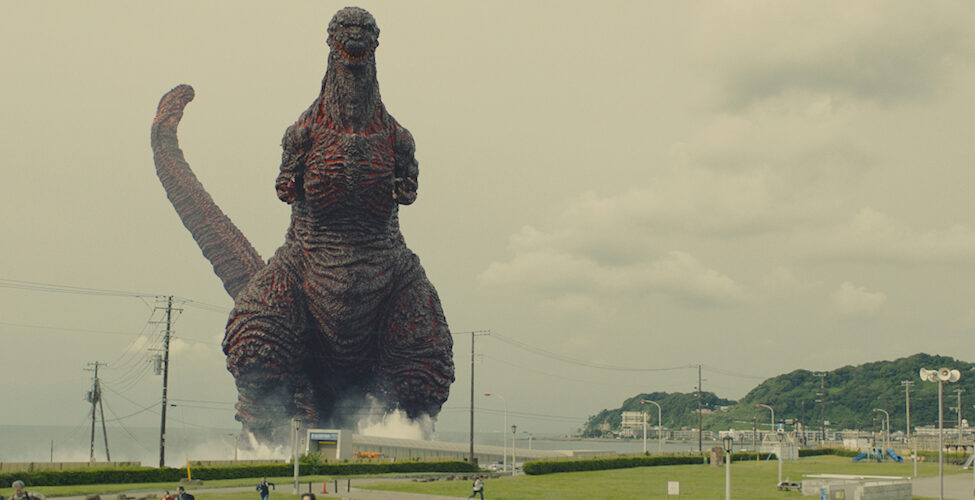 Big-budgeted Hollywood production “Godzilla vs. Kong” hit theaters and HBO Max last week, but for those who didn’t quite get their fill of giant monsters, there’s the Japanese box office and critical smash, “Shin Godzilla.”

“Shin” doesn’t have a direct English translation, but it roughly means “true” or “god.”

Released in 2016, this is the first Toho-produced Godzilla film since the original to start from scratch — meaning the story ignores all the Godzilla movies that came before. After a strange occurrence of the kaiju-kind in Tokyo Bay, Cabinet Secretary Rando Yaguchi (Hiroki Hasegawa) speculates that an underwater tunnel collapse was caused by a large creature. When Yaguchi’s suspicions are confirmed, his colleagues in the Japanese government are caught flat-footed and dithering. Bound in red tape and the desire to keep up appearances, officials are woefully ill-equipped to deal with the rapidly changing crisis.

The creature, later dubbed — you guessed it — Godzilla, comes ashore. But this isn’t the King of the Monsters as you know him. Not yet anyway. Large (but not skyscraper large) and slithering like a snake with mal-formed hind legs, blood pours from gills as he leaves a swath of radiation and destruction in his wake. Godzilla evolves quickly, changing several times before taking the towering form that’ll be familiar to moviegoers. The international community is fearful over what globe-threatening horrors await. They urge Japan to take care of this problem, or they will be forced to step in. (“Terminate with extreme prejudice,” to quote “Apocalypse Now.”) It’s up to Yaguchi, partnered with U.S. envoy Kayoco Anne Patterson (Satomi Ishihara), to assemble a team of scientists to find a solution before a nuclear bomb is dropped on Japan.

Godzilla has rarely appeared so monstrous on screen. The skin for the creature from the 1954 film was reportedly modeled after keloid scars, which were found on survivors of the atomic bombings in World War II. “Shin Godzilla” takes that design element to a new level, the monster perpetually looking as though it’s covered in open sores. Its gaping dead fisheyes are equal parts terrifying and funny. And that pretty much describes the tone of the film overall.

The movie had a limited budget for a project of this type, $15 million according to estimates, though it looks good given the price tag. (Shinji Higuchi is the special effects director.) And the filmmakers use those monetary restrictions to their advantage. Although the facial expressiveness of this Godzilla can’t match Hollywood, there’s something to be said for the impenetrableness of his gaze. You can’t know or understand him.

“Shin Godzilla” sees the titular monster return to his allegorical roots. It was conceived by writer and director Hideaki Anno as a response to his government’s handling of the Fukushima nuclear disaster in 2011. (Fans of Anno’s anime series “Neon Genesis Evangelion” will recognize his penchant for brainy sci-fi and cosmic horror.) The film is distinctly Japanese in some respects, especially in how it dramatizes the country’s place on the world stage, but other aspects are universal. A crisis that threatens the entire globe. National emergencies declared. An incompetent government failing to rise to a never-before-seen challenge. Experts being ignored for political expediency. Mass panic and citizens urged to stay in doors for fear of contamination. Sound familiar?

Anno delivers with strong craftsmanship and an acerbic wit. The first act of this film consists largely of a series of meetings where officials try to figure out exactly what they’re dealing with. Some viewers may find the repetition tedious, and in part, that’s the point. Anno’s choices keep things fresh though. One of my favorite gags involves one meeting ending because the participants need to move to another conference room to discuss the next disaster-related item. Look, we know we’re in the midst of a crisis, but let’s not abandon all decorum! During another gathering, the camera paces back and forth as though a spectator. C’mon guys, people are dying! When Godzilla makes his initial attack, we get very controlled shots inside these conference rooms, and that’s juxtaposed with the shakiest shaky cam you’ve ever seen as Japanese citizens outside flee for their lives. Failure to be decisive comes with a heavy cost. Compositions filled with phones and copiers, the tools of bureaucracy, sometimes pushing characters out of frame. Legislative text covering the screen and overwhelming our characters as they try to determine, legally, whether they can attack Godzilla and whose jurisdiction the monster falls under.

The set pieces from Anno and Higuchi are impressively staged too. The filmmakers adopt low camera angles with elements in the foreground to anchor the viewer and provide a sense of scale. See a shot of Godzilla’s tail waving over a crowded street or the monster marching along a cluster of power lines. I also love the little detail of a protective membrane snapping over Godzilla’s eye, like a crocodile, before he deploys his trademark atomic breath. It’s about to get hot. But for all the freneticism and bombast, Anno knows when to quiet things down. A silent prayer in front of a column of destruction. Or how about when Shirō Sagisu’s driving score goes quiet as a character realizes what fuels Godzilla. “Nuclear fission,” she whispers.

The film’s biggest flaw is the character of Kayoco Anne Patterson. It doesn’t feel like the filmmakers have a firm grasp on U.S. politics. Then again, I wonder how many international audiences laugh at our own films’ grasp of geopolitics.

Anguished. Hopeful. Hilarious. Political. No need to adjourn to the conference room for this one. “Shin Godzilla” is not just a masterpiece of the kaiju genre but a great film in its own right.

“Shin Godzilla” is available on many streaming services for rental or purchase.