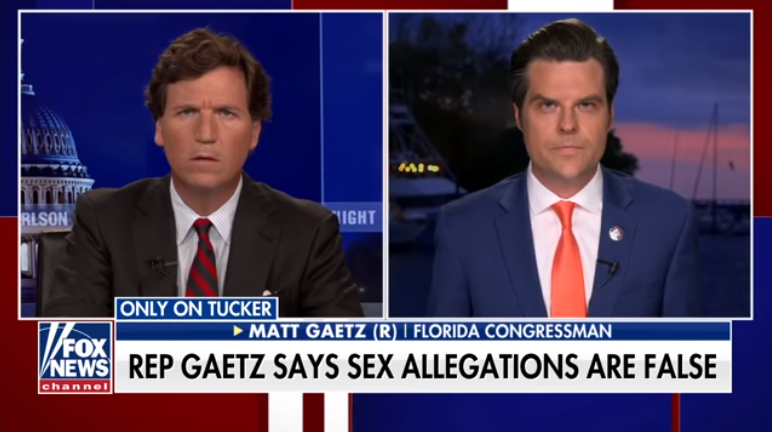 Three things happened in the world of Representative Matt Gaetz (R-FL1) yesterday, so let us just lay them out in order and folks can decide for themselves, since the investigation part of this story is just that — an investigation. So, innocent until proven guilty and so forth. Having said that, things will get bizarre by the end. Here we go:

It was a pleasant, somewhat slow news day Tuesday. The morning started off with Axios and others reporting Gaetz might be looking to duck out of congress after this term:

Why it matters: Gaetz is a provocative figure on the right who’s attracted attention by being a fierce defender of former President Trump. The Republican also represents a politically potent district on the Florida panhandle.

What we’re hearing: Gaetz has told some of his allies he’s interested in becoming a media personality, and floated taking a role at Newsmax.

Which suddenly took on a different context when, by the afternoon, the New York Times dropped a story (paywalled) that Gaetz has been the subject of a DOJ investigation for the past six months:

Representative Matt Gaetz, Republican of Florida and a close ally of former President Donald J. Trump, is being investigated by the Justice Department over whether he had a sexual relationship with a 17-year-old and paid for her to travel with him, according to three people briefed on the matter.

Investigators are examining whether Mr. Gaetz violated federal sex trafficking laws, the people said. A variety of federal statutes make it illegal to induce someone under 18 to travel over state lines to engage in sex in exchange for money or something of value. The Justice Department regularly prosecutes such cases, and offenders often receive severe sentences.

It was not clear how Mr. Gaetz met the girl, believed to be 17 at the time of encounters about two years ago that investigators are scrutinizing, according to two of the people.

The investigation was opened in the final months of the Trump administration under Attorney General William P. Barr, the two people said. Given Mr. Gaetz’s national profile, senior Justice Department officials in Washington — including some appointed by Mr. Trump — were notified of the investigation, the people said.

The three people said that the examination of Mr. Gaetz, 38, is part of a broader investigation into a political ally of his, a local official in Florida named Joel Greenberg, who was indicted last summer on an array of charges, including sex trafficking of a child and financially supporting people in exchange for sex, at least one of whom was an underage girl.

Mr. Greenberg, who has since resigned his post as tax collector in Seminole County, north of Orlando, visited the White House with Mr. Gaetz in 2019, according to a photograph that Mr. Greenberg posted on Twitter.

No charges have been brought against Mr. Gaetz, and the extent of his criminal exposure is unclear.

Mr. Gaetz said in an interview that his lawyers had been in touch with the Justice Department and that they were told he was the subject, not the target, of an investigation. “I only know that it has to do with women,” Mr. Gaetz said. “I have a suspicion that someone is trying to recategorize my generosity to ex-girlfriends as something more untoward.”

Mr. Gaetz called the investigation part of an elaborate scheme involving “false sex allegations” to extort him and his family for $25 million that began this month. He said he and his father, Don Gaetz, had been cooperating with the F.B.I. and “wearing a wire” after they were approached by people saying they could make the investigation “go away.” Mr. Gaetz claimed the disclosure of the sex trafficking inquiry was intended to thwart an investigation into the extortion plot.

In a second interview later Tuesday, the congressman said he had no plans to resign his House seat and denied that he had romantic relationships with minors. “It is verifiably false that I have traveled with a 17-year-old woman,” he said.

By 840ish EST, Gaetz was on Tucker Carlson’s show and this happened:

Tucker came back from the break to say the interview “was one of the most bizarre interviews I’ve ever done.”

So, what do we do with all that?

Let’s stipulate that often headline of “sex trafficking investigation” ends up with there not being sex trafficking convictions. Gaetz has been a high-profile, very vocal personality since his rise to congress, and hasn’t been shy in fighting anyone and everyone. He hasn’t been charged. Of note, this investigation was large enough that former AG Barr signed off on it to continue. As far as guilt or innocence go it’s always wise to let these things play out.

The issue magnifier here is Gaetz’s performance on Tucker where he named dropped folks, proffered alternate theories of the case, claimed to be a victim, and not once but twice directly dragged Tucker Carlson into the issue by personal appeals and telling a slack jawed Carlson that one of the witnesses had dinner with the Fox host and Gaetz. Which Tucker quickly denied remembering. You’d think a lawyer, which Gaetz technically is, would want to button up and get the story straight but he went the opposite way here. Not only going on the highest rated cable news show, but personally implicating the host at the same time, is certainly a bold legal strategy. See how that works out for the boy who grew up in the Truman Show house with a dream of being the third generation of politico in his family, and rose to the halls of congress in adulthood.

So that’s what happened there, on a pleasant Tuesday on the Interwebs. So, what say you?