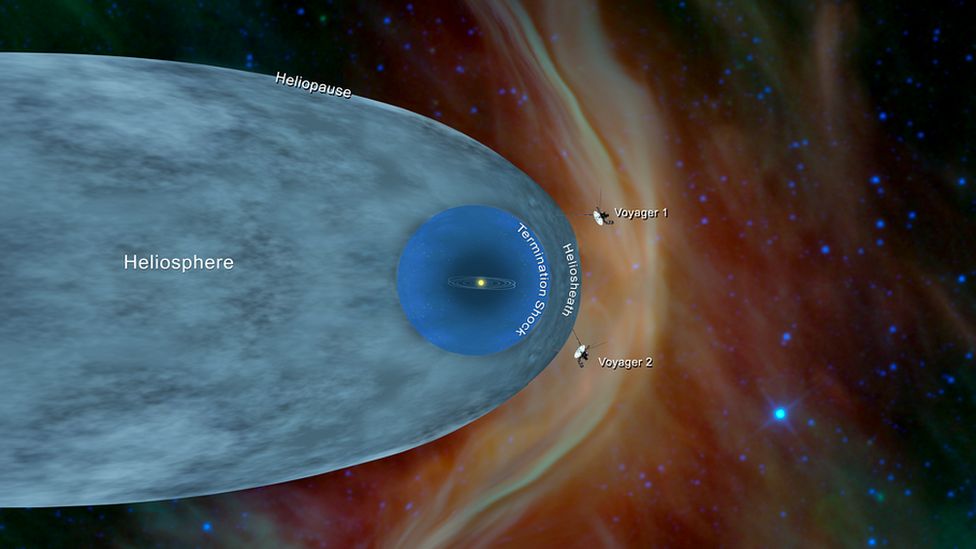 Artist’s depiction of the Outer Solar System and the Voyagers.

We have launched thousands of objects into space, so many that it’s actually starting to get crowded up there. But only a few dozen have ventured out into interplanetary space, going beyond Earth orbit and into the Solar System. The reason is that Earth sits at the bottom of a giant gravity well and an object needs to be boosted to extremely high speed — about 11 kilometers per second — to escape that well. At any lower speed, Earth’s gravity will gradually catch it and bring it back.

The Earth itself sits within the gravity well of the Sun. And to escape that gravity well, a spacecraft must be boosted to an even higher speed — something like 30 kilometers per second. Only five spacecraft have ever achieved sufficient speed to leave the Solar System:

What’s really amazing about the Voyager spacecraft is that they are still functioning over 40 years after launch. Not only are they functioning, but they are also still doing science with 50-year old instruments. They even have Twitter accounts, including one that provides daily updates on their distance from the Sun and the various commands sent to the spacecraft.

I’ve mentioned the Voyagers before but it’s worthwhile explaining just exactly what they’ve done after being in space longer than Dallas has had a basketball team. As recently as ten years ago, our understanding of the outer edges of the Solar System was very limited. The Sun blasts out a constant stream of charged particles called the solar wind. The solar wind carves out a bubble in the Galaxy, an area in which our Sun’s activity dominates over the interstellar medium, the stuff between the stars. We knew that, at some point, the Sun’s influence would fade, that there would be a heliopause where the interstellar medium would take over. This is the point where once could argue that the Solar System ends, and interstellar space begins. Voyager 1 crossed that boundary in 2012. Voyager 2 crossed it in 2018. Both sent back exquisite scientific data that showed the Sun’s influences extends out to about 120 times the distance between the Earth and the Sun. While it took Voyager 1 a month to cross the boundary, Voyager 2 crossed it in only a day. We’re still trying to figure out why that was. It may tell us something about the shape and nature of the “bubble” the Sun carves out as it moves through Galactic space. And they are continuing to provide the first direct measurements of the temperature and density of the interstellar medium, something we could only infer indirectly before.

Now notice that I said one “could argue” that the heliopause is where the Solar System ends. In fact, there’s considerable debate over that. The Sun’s gravity extends out, technically, to infinity. And we know that there are objects well beyond the heliopause orbiting our Sun in the Oort Cloud, a rough sphere of debris that encloses our Solar System. The Cloud may extend out a hundred times the distance that the Voyagers have travelled. We know the Oort Could is out there because it occasionally sends icy objects hurling into the solar system to become once-in-a-hundred-millenia comets. 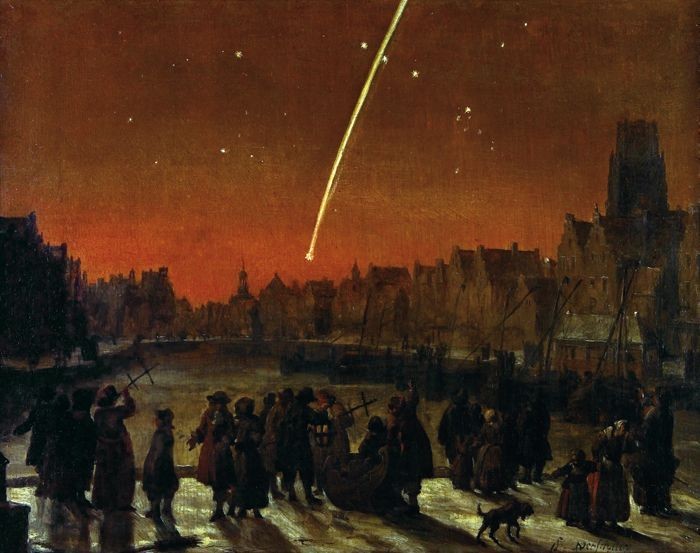 The Great Comet of 1680, an object that drifts out to almost 1000 times the distance between the Earth and the Sun.

What brought this subject up was the news that NASA is looking to hire someone fluent in the 60-year-old language that the Voyagers speak. All but one of the original engineers have retired while the spacecraft themselves have kept going. And we want to keep talking to them and learning from them because they are literally in a place where no one has gone before. Even after all this time and the billions of miles they’ve travelled, they still have things to teach us.

Of course, nothing lasts forever. Both spacecraft use nuclear batteries that have been slowly losing power. And even though their power needs are minimal, their batteries may fall below even that threshold within the next five years.

When that happens, it will be a sad day. Two of our most venerable spacecraft will have finally gone quiet after providing startling images of our Solar System and nearly half a century of scientific discovery. New Horizons is following them out there, albeit at slower speed. And it hopefully has a few decades left, at least until it crosses the heliopause in about 15-20 years. But there will never be another Voyager. So, let’s enjoy the messages they are still whispering to us, as they drift off into the universe, so far away now that it takes almost a day for us to hear them.