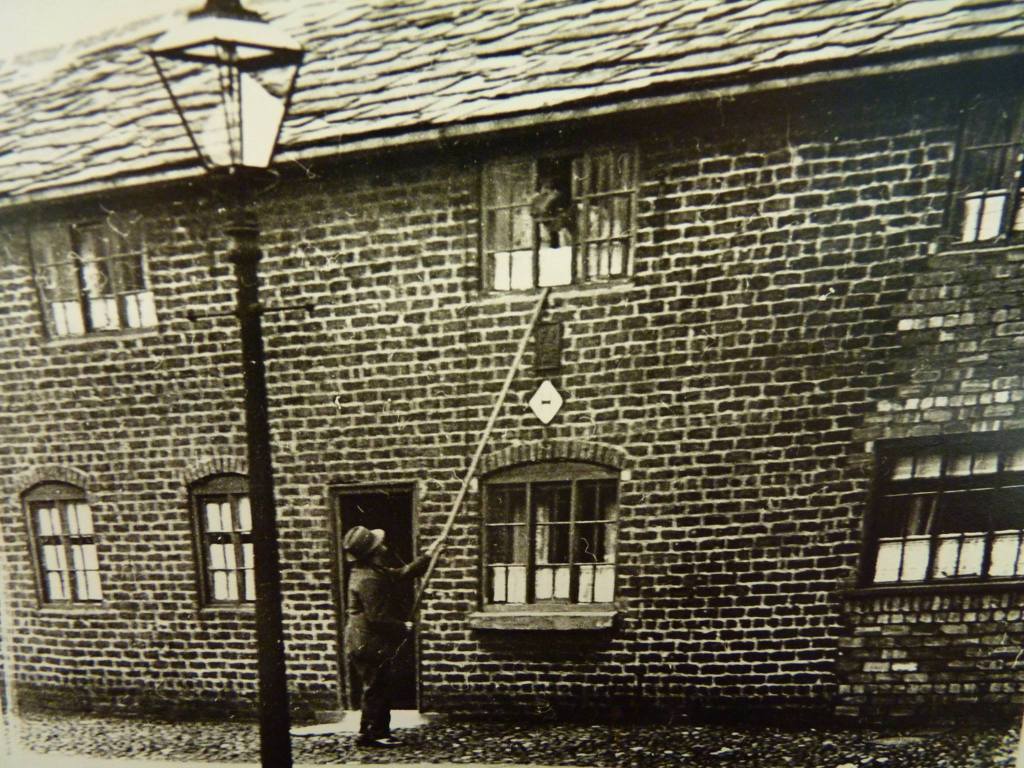 Knocker up on Marsh’s Row Twist lane Leigh – Possibly 1930’s. Photo from the collection of the Lancashire Mining Museum

He lived in East London a century ago and worked 25 years as a knocker upper. Now that job description may not be what you are thinking. During the industrial revolution, luxuries such as alarm clocks were neither cheap nor reliable. In order to ensure you could get to your urban industrial shift work job on time, you could engage the services of a knocker upper. If you worked in East London, you may have employed Mr. Nelson for his vital role in your career success — timeliness. He used a long pole to tap on your window and wouldn’t cease until you acknowledged your wake-up call.

The knocker-upper was obviously someone not prone to insomnia nor oversleeping. They would arise early in the morning and follow a schedule of waking clients by tapping on their bedroom window. Since many people slept on the second floor of their home, the knocker-upper usually employed a long pole. Another East London knocker-upper was Mary Smith. For her six pence a week, she was able to trade on her skill with a rubber tube to shoot dried peas at the windows of her customers. Sometimes the local police constable would take on the role as he was already awake for his morning rounds and could use the extra spending money. The title of last known knocker-upper was claimed by Mary’s daughter, Mrs. Molly Moore, whose job terminated at the start of World War II. The career existed for about forty years.

The knocker-upper could be considered akin to the standard canard of the buggy-whip maker: careers that came and went within the framework of an era. Yet many other careers have survived for millennia. Recently, I asked my friends on Twitter to recommend careers that have stood the test of time. I will not bother to recount those too-obvious submissions and will cite just a few responses. Some perennial ones include personal services such as hairdressers, barbers, massage therapists, healers, tailors, and for those of the upper classes, valets and pet sitters. The building trades are always near the top of anyone’s list. In ancient times, masonry and ceramics were key skills in Europe and the Middle East. Asian cultures used more wood and needed many skilled carpenters. Vast networks of aqueducts and roadways were pioneered by the Romans who relied on armies of plumbers and stonemasons. Medieval construction projects added glaziers and artists in glass and stone. Bookkeepers and artisans have always been in demand from the evidence brought to light by archaeologists.

A key job for all of humankind from the dawn of history until the first industrial revolution were impoverished agricultural workers: mostly feudal peasants and tenant farmers who cultivated small plots for their family sustenance with the extra crops being sold for needed housing and farm equipment. Only a small percentage of people worked in crafts and trades. After the development and wide adoption of indoor plumbing, electricity, and radio communications between 1870 and 1940, a new generation of tradesmen (male and female) were called upon to build and network houses and public buildings to regional infrastructure components for water treatment and distribution as well as the installation of first gas then electrical lighting. The world had made a major shift that demanded new industrial skills. The percentage of agricultural workers needed to feed the population plummeted while the mechanical trades have grown equally as dramatically.

Yet there is a stable foundation of critical skills that will always be with us. My wife and I watched the futuristic, sci-fi show The Expanse recently. While enjoying the plot, I kept my eye on the various careers of the characters. Of course, there were the ubiquitous politicians and military personnel. But there was also a decided reliance on repair personnel, electrical and power workers, gardeners, finance people, and bartenders. I don’t doubt they will all be with us in the future after having seen the stalls that sold cold wine to spectators in the Coliseum of Rome, the food storage centers at the Great Wall, or the shady seating in the sports arena at Chichen Itza.

So, when young people seek career advice, what do you say? Start by listening.

There was a decade in my life where the missus and I attended graduation ceremonies for our daughters and the children of family and friends. Invariably, the school would have young graduates mount the dais and speak about their dreams of life after high school. Future career plans are almost always the topic of these talks. When you listen to their aspirations, you quickly notice a pattern. There are common responses among all high schoolers: teacher, doctor, police, firefighter, or whatever mom or dad did. I would muse as I scanned the adults in the audience and saw insurance adjustors, real estate agents, greengrocers, and psychometricians. Young people usually envision themselves as older versions of the career people with whom they interact most frequently. They simply haven’t had the exposure to see the entire spectrum of work life options.

As parents and mentors, we owe it to the next generations to help expose them to all the options life offers while retaining a sense of practicality based on their needs and desires. We had one daughter come to us weeks before her high school graduation and only a few months before we had planned to enroll her at a small, private college in western North Carolina. She had decided she didn’t want to take that path. She knew she needed a career and ultimately decided she would attend a local cosmetology school.

For a year, our daughter attended classes and worked on creepy Styrofoam heads I would find perched on a counter in the wee hours of the night. She cut my hair for practice early in her training while I sat on a chair in the driveway. I snuck off to my local barber for some corrections as soon as I could do so without her noticing. She then accepted an internship at a local salon. She excelled at her craft and was soon shopping for a (used) BMW and a home to buy before her older sister had even completed her undergraduate studies in finance. I recall several subsequent discussions with my eldest about how delayed gratification works. Ultimately, both found effective life skills rooted in antiquity.

As you listen to youngsters with their career plans, you will likely harken back to your own career dreams of childhood and compare them to the work life that brought you to where you are today. For most of us, life hasn’t necessarily worked out the way we had initially planned when our mandatory education ended. But you can’t go far wrong looking at the lessons of history and mapping them against the trends of the age. I’ll bet a lot of the newest graduates are today looking at the knocker-uppers and buggy whip making gigs of the 21st century.

President Biden made his first prime time address to the nation after signing the latest Covid Relief Bill that marked his administration's first major legislative accomplishment.