ICA 2020 Election Report: Read It For Yourself 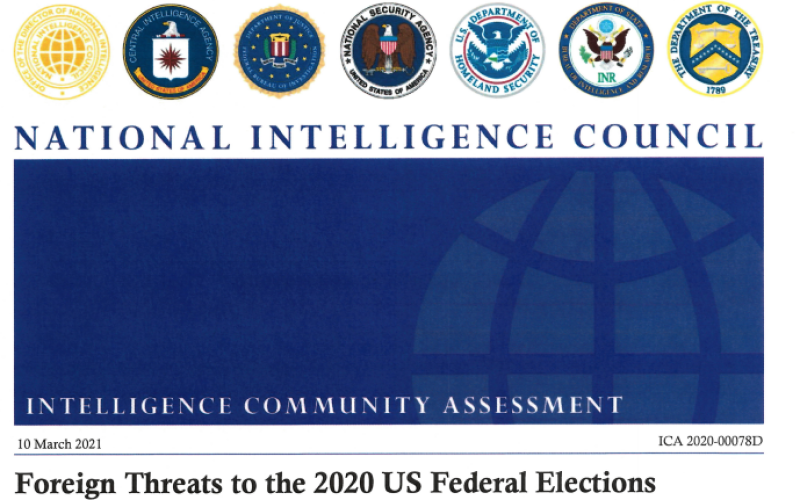 The ICA 2020 Election report on foreign efforts to influence last years elections has been released, and a declassified PDF is available to read, search, and consider for yourself.

The declassified report represented the most comprehensive intelligence assessment of foreign efforts to influence the 2020 vote. Besides Russia, Iran and other countries also sought to sway the election, the report said. China considered its own efforts but ultimately concluded that they would fail and most likely backfire, intelligence officials concluded.

A companion report by the Justice and Homeland Security Departments also rejected false accusations promoted by Mr. Trump’s allies in the weeks after the vote that Venezuela or other countries had defrauded the election.

The reports, compiled by career officials, amounted to a repudiation of Mr. Trump, his allies and some of his top administration officials. They reaffirmed the intelligence agencies’ conclusions about Russia’s interference in 2016 on behalf of Mr. Trump and said that the Kremlin favored his re-election. And they categorically dismissed allegations of foreign-fed voter fraud, cast doubt on Republican accusations of Chinese intervention on behalf of Democrats and undermined claims that Mr. Trump and his allies had spread about the Biden family’s work in Ukraine.

The report also found that neither Russia nor other countries tried to change ballots themselves. Efforts by Russian hackers to gain access to state and local networks were unrelated to efforts by Moscow to influence the presidential vote.

The declassified report did not explain how the intelligence community had reached its conclusions about Russian operations during the 2020 election. But the officials said they had high confidence in their conclusions about Mr. Putin’s involvement, suggesting that the intelligence agencies have developed new ways of gathering information after the extraction of one of their best Kremlin sources in 2017.