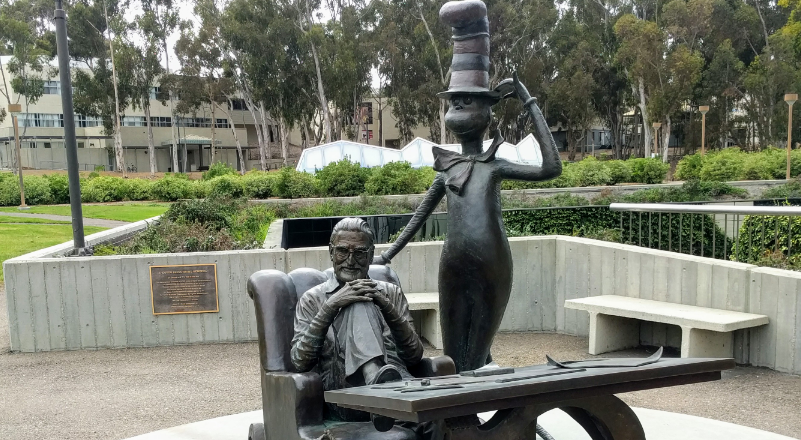 Photo of a memorial to Theodor Seuss Geisel, located outside the Geisel Library at the University of California, San Diego.
2 September 2018. Photo by Harry Cutts via Wikimedia Commons. (photo was cropped for size)

Horton has probably heard that on March 2nd Dr. Seuss Enterprises decided to cease publication of six books that contain “portray[als of] people in ways that are hurtful and wrong.” This produced the cycle of controversy and performative contrarianism that has become as familiar as the list of places Sam won’t eat green eggs and ham. What separates this incident from more recent cancellations is that this time it has turned (at least in part) into a discussion of copyright terms and ownership of works written by those now long dead.

The problem of “disappearing works”, when those who hold the rights to something don’t reproduce it, is it falls down the memory hole, never to be seen again, is not a new one. Unlike trademarks, the Copyright Act does not have a use-it-or-lose-it clause. There is a universe like ours but (thankfully) not ours where Orson Welles’s The Other Side of the Wind was one work to suffer such a fate due to coordination issues among various rights holders. While Disney’s “vault” is more of a marketing strategy than a final resting place for older films, there are movies like Song of the South, which likely won’t be made available.

It makes sense that this is the incident that would bring these issues front and center. Unlike controversies surrounding episodes of recent shows (like Community and 30 Rock) that would still be protected under the terms of the original Copyright Act, this deals with works that are more than 50 years old written by a man dead for nearly 30 years. Unlike controversies related to school districts removing books by Mark Twain from the curriculum, they’re not in the public domain. And unlike controversies surrounding tech platforms or major retailers refusing to sell a book, it’s the entity with the final say-so over whether or not a work can be reproduced, pulling it from the shelves.

There’s never a bad time to discuss the interlocking problem of long copyright terms and disappearing works. While certainly a good idea, fixing the former won’t do anything about the latter and ignores reforms to copyright law that could more effectively address these issues.

To be blunt, I’m not optimistic that much can be done to address the issues created by our current copyright terms, let alone reduce them to thirty years. Our current terms of life plus seventy (95 years for other works) is too long, and the retroactive extension of copyright terms by the Sonny Bono (or “Mickey Mouse” if you prefer) Copyright Term Extension Act remains an unforgivable power grab by legacy rights holders. However, even modest changes like former Register of Copyrights Maria Pallante’s suggestion to return to the pre-1998 terms of life plus fifty would face legal constraints, to say nothing of the herculean political effort it would take to make such changes a reality.

This doesn’t mean this isn’t a conversation worth having or a fight worth fighting. While I’m not optimistic that the argument for fair use to apply to out-of-print works proposed by Stanford University law professor Mark Lemley would succeed in court, expect to find me dancing in the street if it did. Skepticism regarding messages to leave international trading institutions is warranted (especially considering the messengers). Still, if conversations about leaving such arrangements are to be had, the Berne Convention is a good place to start. Even if long copyright terms can’t be realistically fixed, they should be a pebble in everyone’s shoe. Whenever proposals to rework the Digital Millennium Copyright Act, increase the penalty for unauthorized streaming, or make any other changes to better police infringement are advanced, nobody should forget the extraordinary amount of time current law affords rights holders the ability to enforce their exclusive rights.

The news isn’t all bad. There are tools in place to prevent the disappearance of works previously made available to the public and low-hanging legislative fruit to be picked to expand access.

Seuss Enterprises can prevent the distribution of e-books and burn every hard copy they have in their warehouse, so they never see the light of day, but thanks to the first-sale doctrine (also called exhaustion) there’s nothing they can do to prevent someone from lending or selling the physical copies that already exist. Physical copies of disappeared works’ supply are fixed under current law, but it’s not zero.

This is good news, and used copies of Seuss’ books are fetching a king’s ransom online. This doesn’t stop sites like eBay from delisting such items (it’s their website), but thanks to e-commerce, it’s easier than ever to connect willing buyers to book owners. Ironically, the expansion of access made possible by the internet could be the greatest threat to legally accessing works.

This problem was explored in-depth by Aaron Perzanowski and Jason Schultz in their book The End of Ownership. I don’t need to know how many books you have on your Kindle or iPad to tell you that you own none of them. Suppose a DMCA takedown notice is sent regarding an allegedly infringing work on a platform like Amazon, or some similar dispute over the rights to reproduce a work emerges. In that case, the work must be taken down lest the platform face liability for copyright infringement. In 2009, Amazon had to delete “purchased” copies of 1984 from Kindle users’ devices after a dispute with the rights holder. More recently, the New York Times covered the extensive abuse of DMCA takedown notices in the world of wolf-kink erotica (look it up).

The way to address this problem is to formalize digital ownership in our copyright laws. The creation of a “digital first-sale” right wouldn’t help those who stream or license, but it would make legally viable the option for consumers to fully purchase the right to the digital copy of a work, which they could then buy and sell just as they would in the real world. Perzanowski and Schultz suggest this, and while there is an argument to be made that this can be fixed by the courts, there’s no substitute for the certainty provided by legislation.

There is also ample opportunity to bridge the divide between the digital and physical world. The Internet Archive’s Open Library has created the infrastructure necessary to do this. There, 1.5 million books are warehoused to be viewed by readers for a limited time so long as the number of borrowers does not exceed the number of books kept in physical storage, thus maintaining a one-to-one “own-to-loan” ratio one would find in any other library. This practice is called controlled digital lending (CDL), and its time in a legal grey area is coming to an end. Following the Open Library expansion into the National Emergency Library, where the waitlist feature was removed and any number of books could be checked out, four major publishers sued the Internet Archive for copyright infringement.

If the Open Library’s jump onto the barbed wire is successful, we could see an explosion of books’ availability by public, church, or university libraries. It’s not difficult to imagine a “cancelled digital library,” where Dr. Seuss would be kept in storage alongside the thousands of bulk-purchased copies of Donald Trump, Jr.’s books the RNC is probably looking to get off its hands.

The outrage over Seuss’ cancellation turning into a debate around copyright terms reminds me of the Frasier episode “The Perfect Guy.” The titular perfect guy, physician Clint Webber, guest co-hosts Frasier’s call-in psychiatry program. A caller complains of difficulty getting out of bed and irritability. Frasier offers some Freudian mumbo jumbo about the desire to stay in the womb, adding that the necessary therapy will be hard work. Doctor Webber, astonished at Frasier’s psychoanalytic prowess, offers that he would have simply told the caller to eat more protein for what sounds like a case of hypoglycemia. Hilarity ensues when the caller remembers feeling much better after eating an egg one morning, thanks Doctor Webber, and chastises Frasier for scaring the life out of her.

Shortening copyright terms at all would be hard work and run into legal and constitutional difficulties, let alone fierce political opposition. Fortunately, there are open legal questions that can clearly be answered either in court or by clarifying the Copyright Act. If there’s serious interest in addressing disappearing works, there are plenty of eggs to be had, coloring and ham optional.

Daniel Takash is the Regulatory Policy Fellow and Manager of the Captured Economy Project at the Niskanen Center. You can follow him on Twitter at @danieltakash or @capturedecon