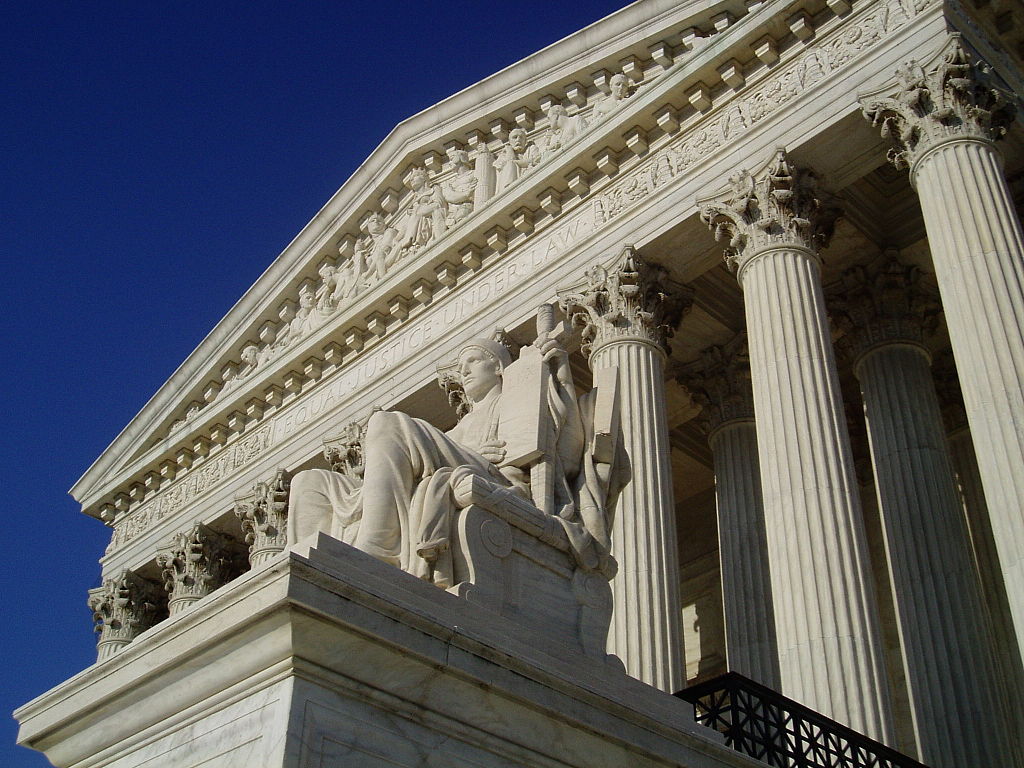 Authority of Law outside the United States Supreme Court. Photo by by Matt H. Wade via Wikimedia Commons.

L1: Another 2020 election challenge bit the dust this week as SCOTUS declined to hear a case involving the alleged unreliability of Pennsylvania’s vote-by-mail procedure. Justice Thomas wrote a dissent because of course he did (though even he concedes the case had no potential to overturn Trump’s loss,) as did Alito, joined by Gorsuch.

L2: In the second part of a double whammy for Trump, the Supreme Court also gave Manhattan prosecutors a greenlight to obtain the former president’s financial records.

L3: Also losing at SCOTUS this week: Stormy Daniels, whose appeal in her failed defamation case against Trump was declined, with none of the justices feeling the need to expend time explaining why.

L4: Confirmation hearings are underway for US Attorney General nominee and former Supreme Court nominee Merrick Garland. Here’s a recap of the highlights.

L5: Illinois will become the first state to eliminate cash bail by 2023. Advocates say whether you stay in jail before your trial or not should depend on your risk to the public, not your ability to come up with money. Law enforcement and prosecutors are unhappy about the new law, but have not yet presented a decent argument to me as to why, all other things being equal, a person of means is less of a threat than a poor person charged with the same crime.

L6: The governor of New Jersey signed a bill legalizing -and, of course, regulating – the possession and use of marijuana by people over the age of 21. Proponents are hopeful federal legalization is on the horizon under the Biden administration.

L7: Virginia’s plan to get kids back to school includes temporarily mandatory in-person learning, vaccinations for teachers, and options for parents. If passed, the bill won’t take effect until after the school year ends, and sunsets in August of 2022.

L8: There are certain key words I use when scouring the web to find links for you (almost) every week, one of which is “legal”, which usually turns up some local news stories about DUI arrestees with blood alcohol levels above the “legal limit”. I normally just scroll by, but this one defies reality.

L9: It’s not every week I can include a link and say hey, I know this guy, but … I know this guy.  He was friendly, kind of obnoxious … the verbose type most other attorneys roll their eyes at and being verbose among lawyers is an accomplishment. He’s been giving appointed defense counsel a bad name, billing the state for fees adding up to more than 24 hours in a day. Then he hopped the border and headed to South America for 4 years to avoid prosecution. Kudos to the local hard-ass judge who wouldn’t accept the misdemeanor plea agreement