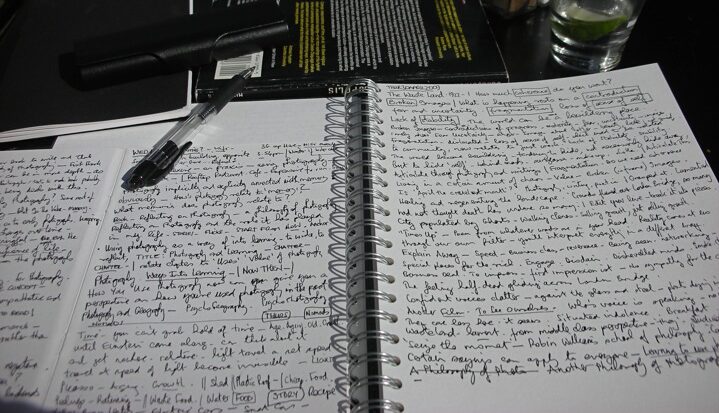 Photo by Tony Hall, CC BY 2.0 <https://creativecommons.org/licenses/by/2.0>, via Wikimedia Commons
Have a break at Coco Momo in Marylebone High Street on Wednesday afternoon to read and write some notes.
The notes are all over the place and are referencing some ideas for making books that have something to do with a personal philosophy of photography.
(7875) read, write, Coco Momo, book, philosophy of photography,

I recently came upon a discussion on Twitter about the decline in handwriting. Nick Enfield the author of the Twitter thread, “Is handwriting on the decline? If so, does it matter?” shared his experience being approached by a tv news producer about ‘the decline of handwriting’. Professor Enfield gave his perspective as a Linguistic Anthropologist, and Professor of Linguistics. He noted his professional opinion didn’t quite mesh with the producer’s story angle. Since it wouldn’t be included in the news story, he shared it with the masses on Twitter, instead. That’s what I’d do.

Ordinarily, handwriting is not on my top ten list of “Fun Stuff to Talk About.” but, something about this was different. It was personal. I actually had a perspective I really hadn’t seen many folks talk about. Now, you may be wondering how my perspective could possibly be relevant in this discussion. I’m no expert on much, apart from “How to live like a Queen on a Peasant’s income” or “The art of tripping over air.” But, after reading through plenty of other people’s opinions, surely sharing mine couldn’t hurt. And, obviously, as an outspoken and opinionated *ahem* lady, I rarely wait for a cue to chime right in.

I saw an opportunity to respond to a familiar mutual follower, who disagreed with Mr. Enfield’s opinion. His take, which was widely shared by others, was that text allowed for less thoughtful wording. That text takes away from the physiological brain to hand to paper process. Like instantaneous “neener neeners” is what text has allowed far too many people to become accustomed to. It’s a fair point, but I found myself thinking about how many drafts of emails, tweets, texts, etc… I had saved at that moment. Holding them until I found the words to best communicate my thoughts. I didn’t point out that fact, though. No, I held onto that one, too. I responded, instead, with what I felt was more important.

“Typing into a device is all that makes communication possible for some people. Thoughtful & intelligent words are what’s important. Ppl speak, write, & “text” w little thought to the impact of their words. And that’s unfortunate, but true in my view.”

I immediately cringed at myself after sending that. Imagining all the responses sounding something like “Ha Ha Ha. Oh, okay L. Such a ridiculous thing to say. Who can’t take a pen, pencil, or marker, and at least write “For a good time, call…” on a bathroom stall?” But then I shut down that line of thought, and remembered why ‘I said what I said!’ It’s the truth. If you’re scratching your head, please indulge me, and allow me to explain this truth. As well as why it was important and personal to me.

I’m the mother of two amazing teenagers. My younger offspring suffered a fetal stroke, resulting in permanent brain damage in his cerebellum. This part of the brain controls coordination of voluntary motor movement, balance and equilibrium, and muscle tone. For my son, this meant many years of therapies. Physical, Occupational, Play (oh, yes. It’s a thing), and Speech. So, I recalled a moment years ago, when I’d reached my breaking point in trying to understand what my son was trying to tell me. I felt overwhelmed, overcome with frustration, anger, sadness, and hopelessness. No words came from my lips. Instead, all that came to mind was a scene from “Mr. Holland’s Opus.” A phenomenal film, by the way. But one line stayed with me. One unforgettable line that validated every ounce of my being in that moment…I felt as if the late, great, Glenn Headly traveled forward in time to step into my shoes, just to feel the emotions necessary to execute THE perfect exclamation. “I WANT TO TALK TO MY SON!”

The first time I watched that scene, I cried for her…Years later, I would cry with her.

Ultimately, it took 11 years to find a mode of communication that was most effective for my son, Ben. Ben couldn’t take a pen, pencil, or marker and scribble much more than some marks…up and down, or side to side. But his pointer finger on a keyboard would certainly begin to get his point across, quite effectively.

Going back to the original topic about handwriting, I’m still curious. I suspect the position of the producer who reached out to Mr. Enfield had a great deal to do with the rhetoric of many on social media. I have no clue who this producer is, nor his motives, but I base my suspicion on his unwillingness to include Enfield’s opinion in his segment. Some social media platforms do limit the amount of characters allowed in one message. Twitter is a good example. However, it also allows for more elaboration with the ability to link tweets together to form a thoughtful, cohesive thread. If one so chooses, the option is there to eloquently and fully express their thoughts, opinions, feelings, etc.

So, has the written word taken away all meaning from the spoken word? Has text really caused the demise of the written word? Or are we evolving, universally, to give us each a voice? A voice that can be widely recognized, translated, and ultimately, understood. No matter how I choose to communicate, there are sufficient words available in most any language to accurately, and effectively express myself. Ideas and experiences can be shared in so many ways. Perhaps it’s time to embrace the opportunities available because of technology, and be grateful that more ideas and experiences can now be shared by, and with so many more of us.

London is a single Mom of two. Advocate for natural alternatives, with a focus on general wellness. She's also a consultant, care coordinator, and part-time provider of direct care for families and individuals with developmentally disabilities and senior citizens. Her passion is working with the terminally ill through their end of life stage. You can finder her on Twitter @llondonjournals