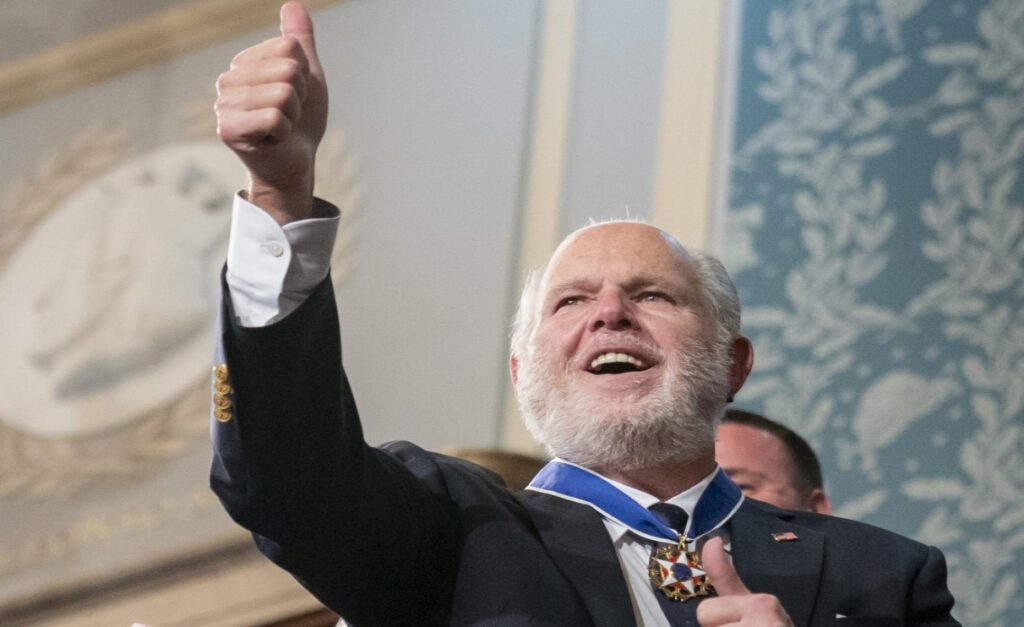 Rush Limbaugh gives a thumbs-up to President Donald J. Trump from the House Gallery Tuesday evening, Feb. 4, 2020, after President Trump awarded Limbaugh with the Medal of Freedom during the State of the Union address at the U.S. Capitol in Washington, D.C. (Official White House Photo by D. Myles Cullen) [Public Domain]

Conservative radio host Rush Limbaugh has died at the age of 70, his family has announced.

The veteran right-wing media star died after a long battle with lung cancer, his wife Kathryn announced on his radio show on Wednesday.

Mr Limbaugh announced that he had advanced lung cancer in January 2020, and just days later received the Presidential Medal of Freedom from Donald Trump at the State of the Union address. “Rush Limbaugh: Thank you for your decades of tireless devotion to our country,” said Mr Trump during the address.

Mr Limbaugh began the Rush Limbaugh Show in 1988 with just 56 stations taking it in syndication.

The show would eventually grow into the most popular radio show in the country with more than 27 million weekly listeners on more than 600 stations across the US.

During his final radio show in 2020, Mr Limbaugh thanks his listeners and told them he had outlived his medical prognosis.

“I wasn’t expected to be alive today,” he said.

“I wasn’t expected to make it to October, and then to November, and then to December. And yet, here I am, and today, got some problems, but I’m feeling pretty good today.”

There is going to be plenty written and pontificated about Rush Limbaugh, good and bad, but that speaks to his impact. Almost everything we know and think of today as political media has roots in what Rush Limbaugh did. The revolution he spearheaded was not in his radio show, or his conservative commentary, or the success of his on-air program. Limbaugh pioneered and mastered the now-common method of monetizing a political viewpoint around your personality and personal brand and targeting it to an audience that wasn’t being served what they wanted elsewhere.

Limbaugh is also a fascinating median line if you want to chart the course of popular conservative thought over the last 30-40 years. From the Reagan-era Goldwater-ish traditional meaning of conservatism to being the champion of his close personal friend Donald Trump in later years, the debate of whether that was an evolution, a deviation, or was the plan all along will keep the pundits busy for a very long time.

The undeniable part, and whatever you think of Rush Limbaugh the man, his politics, or his business model, one of the most impactful figures in politics, culture, and media of the last 40 years is now gone, and it will be interesting to see what comes next to fill that void.