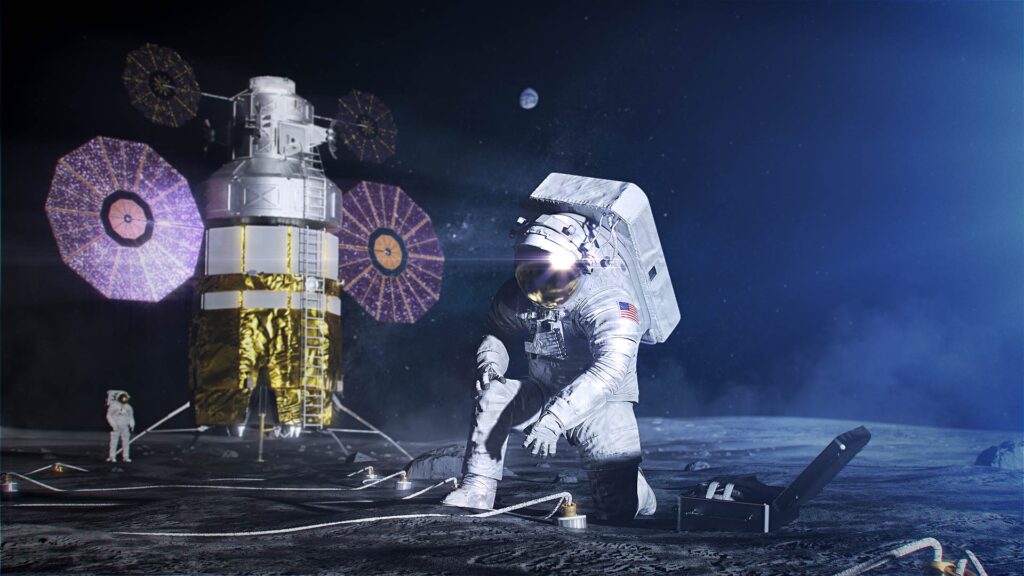 Artist concept of an astronaut in the xEMU space suit setting up a science experiment on the lunar surface. (NASA)

Biden is going to continue Artemis:

“Through the Artemis program, the United States government will work with industry and international partners to send astronauts to the surface of the moon — another man and a woman to the moon,” Psaki told reporters in a White House press briefing Thursday.

“Certainly, we support this effort and endeavor,” she added.

Here’s NASA’s overview of the program:

Psaki did not address the 2024 goal for landing on the moon, probably because no one takes that date seriously. That’s only three years from now. But most of the components of Artemis are still works in progress. We may get a flight-worthy Orion module this year but the Space Launch System, Lunar Gateway and lander are still more dream than reality. We haven’t even launched the robotic probes that are supposed to be the precursor of the mission. Moreover, the total cost is expected to be another $50 billion, conservatively. I doubt Congress will be willing to authorize such a large increase in NASA’s budget (currently $20-30 billion a year) in such a short time.

Artemis is labelled as President Trump’s program. And it is. But Artemis itself was simply a retasking of things NASA was already working on. Obama had cancelled the Constellation program but kept many of the elements in place as part of a broader approach to space exploration that wasn’t specifically targeted on the Moon.1 But should it be our focus right now?

That’s a tricky question. To my mind, NASA policy should be oriented around three major goals:

You’ll notice I didn’t list a Moon mission on there. It’s not because I oppose a mission. A return to the Moon would be great. And, long-term, if we could figure out a way to build deep space missions in Lunar orbit using local materials, that would save some money. But a Moon mission should happen in a large context, not just as a stunt. And we were in very real danger of bypassing the systematic approach that Artemis initially laid out in order to get someone on the surface during a hypothetical Trump second term, doing science that robotic missions could do.2

If I were put in charge of space exploration, my first goals would be as listed above. My second would be to more firmly establish a human presence in Earth orbit. We’ve made some progress with Space-X and other launch vehicles. We should now orient ourselves around building more space stations and orbital platforms.

A Moon mission could be part of that and would go largely along the lines that Artemis has laid out: robotic missions first, the establishment of a Lunar Gateway — an orbital station from which access to the Moon could be controlled; possibly the construction of an Earth-Moon shuttle that would go between the orbital stations and cut launch costs. The ultimate goal would be a permanent habitation, probably below the surface of the south lunar pole. But that all takes time. And money. Far more time and money than Artemis was looking at.

A properly paced out and funded Artemis, as part of a larger return to space, would probably take the rest of my lifetime to get going but it would have the advantage of permanence and purpose. To get to the 2024 goal, NASA was planning to bypass their own plans for the Lunar Gateway, essentially doing a discount warmed-over Apollo. But that, while fun, would leave us in the same place the original Apollo mission did: without a permanent presence or long-term vision.3

So, should Biden continue Artemis? Yes. And for one real reason. One of the problems that has plagued our efforts at space exploration has been the constant changing of goals, programs and objectives. Every Administration comes in, state some lofty goals and spends a lot of money. But before anything can really happen, they’re out of office and the next Administration decides to throw all that away in pursuit of a new goal. Obama’s cancellation of Constellation hurt but it felt like we were getting oriented in a better direction, toward a more long-term plan for space exploration. But our human exploration program is still plagued by being seen less as a way to advance human knowledge and achievement and more of a way for Presidents to set lofty-sounding never-to-be-achieved goals and Congress to throw money into their districts.

My preferred approach at this point is to orient Artemis more around a series of achievable goals and less around specific dates. To keep funding it but also fund more orbital and suborbital work. To cut the red tape that is still hampering private space exploration. In other words, to do the kind of low-key stuff that doesn’t grab headlines but makes a human presence more viable, politically, technologically and economically.

Biden has dodged the first pitfall of immediately changing gears to put his “mark” on the program, at least for the first 100 days. But we will eventually need a more coherent vision for space that also keeps us from throwing away everything we’ve done for the last four years.4 Artemis may never fly and our return to the moon may be delayed a long time — perhaps to the point where we’ll have to rent landing space from China. But if we can keep ourselves oriented around developing systems, vehicles and an overall strategy, the things it is doing will prove useful. It can lay the groundwork for breaking out of the 30-year funk we’ve been in on manned space flight.

I’m not holding my breath, however.