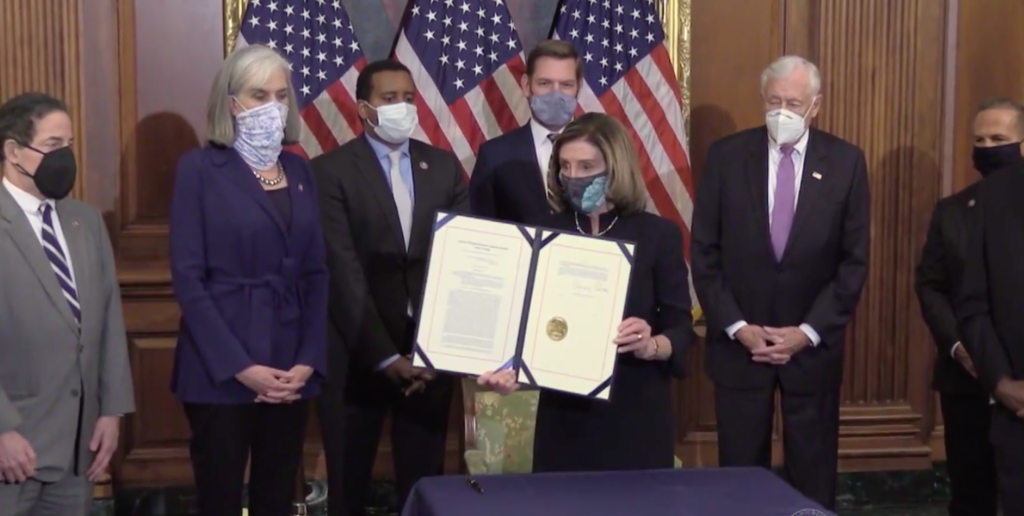 Nancy Pelosi and the House Managers at the signing of the Second Impeachment of President Donald Trump Office of Nancy Pelosi, [Public domain] via Wikimedia Commons

Editor’s Note: All updates will appear below the live feed to keep the page clean for folks trying to watch

House impeachment managers introduce video evidence as part of their case against Donald Trump, depicting one of the darkest days in American history. pic.twitter.com/7G2Jf1PEnQ

In emotional recounting, Rep. Jamie Raskin says members of his family hid under a desk during the Capitol siege, “placing what they thought were their final texts and whispered phone calls to say their goodbyes. They thought they were going to die.” https://t.co/Lau7kmD368 pic.twitter.com/oVkxJmttgm

This impeachment process is going to go much quicker than the last, with rules now agreed to by the Senate on how the trial will be conducted, and frankly the outcome is not in doubt.

The Senate on Monday prepared to launch a historic second impeachment trial of former president Donald Trump on the accusation that he instigated the deadly Jan. 6 Capitol riot, with Democratic and Republican leaders agreeing on a rapid timetable that could bring the proceedings to a close within a week.

The charge is serious, and the circumstances are unprecedented — it is the first impeachment trial for an ex-president as well as the first time any president has been impeached and tried twice. But there is little drama surrounding its outcome: Most Republican senators have signaled that they will not be voting to convict a former president.

Under a deal negotiated by Senate Majority Leader Charles E. Schumer (D-N.Y.) and Minority Leader Mitch McConnell (R-Ky.), there still exists the possibility that senators could vote after four days of arguments to extend the trial by calling witnesses and examining testimony that could shed additional light on Trump’s actions and motivations surrounding the events of Jan. 6.

But that appeared exceedingly unlikely Monday, with Democrats wanting to move quickly to pass President Biden’s $1.9 trillion pandemic relief proposal and Republicans seeking to get past the internally divisive debate over Trump as soon as possible. Several Senate aides, speaking on the condition of anonymity to describe internal discussions, said they expect an acquittal vote as soon as next Monday, which is Presidents’ Day.

Schumer said Monday that the deal would “allow for the trial to achieve its purpose: truth and accountability” — and force Republicans to go on the record.

“The merits of the case against the former president will be presented, and the former president’s counsel will mount a defense,” Schumer said. “Ultimately, senators will decide on the one true question at stake in this trial: Is Donald Trump guilty of inciting a violent mob against the United States, a mob whose purpose was to interfere with the constitutional process of counting electoral votes and ensuring a peaceful transfer of power?”

In a new filing Monday, the nine House impeachment managers said the evidence for Trump’s conviction was already “overwhelming” and promised to prove their case.

“We live in a Nation governed by the rule of law, not mob violence incited by Presidents who cannot accept their own electoral defeat,” they said.

Once the rules for the trial are adopted, the proceedings will begin Tuesday with a four-hour debate over whether the Constitution allows the Senate to try a president who has already left office.

Trump’s legal team, some legal scholars and many Republican lawmakers have embraced arguments that it is unconstitutional to do so. In a signal that theory alone could be enough to win an acquittal, 45 of 50 Republican senators backed Trump on that question in a test vote last month — meaning an additional 12 Republicans would have to be persuaded that the trial is constitutionally permissible for the managers to have any hope of conviction.

Congressional Democrats and more than 150 constitutional scholars — including a founder of the conservative Federalist Society — say post-presidential impeachment, conviction and disqualification from holding future office are permitted. That view got an important endorsement Sunday from an influential Republican lawyer, Charles J. Cooper, who argued in a Wall Street Journal op-ed that removal was only a “mandatory minimum” punishment for an official with an impeachment conviction.

“Given that the Constitution permits the Senate to impose the penalty of permanent disqualification only on former officeholders, it defies logic to suggest that the Senate is prohibited from trying and convicting former officeholders,” wrote Cooper, who has represented numerous prominent conservative politicians and causes. He is currently representing House Republicans in a constitutional challenge to a proxy voting system instituted by Democrats.

After the debate, senators on Tuesday will vote on the constitutional argument against impeaching a former president. While there are almost certainly enough votes to clear that initial hurdle, an outcome short of a 67-vote majority could reinforce the likelihood of an acquittal and put the proceedings on a glide path to a final verdict.

Following the vote on constitutionality, opening arguments would kick off Wednesday, with House managers and the Trump defense team each entitled to up to 16 hours, spread over two days, to present their cases.