While doing the normal thing of wandering around the intertubes, I encountered an exchange that went something to the effect of this:

And I got angry all over again.

Portal was amazing. It had an exceptionally interesting conceit, it had really interesting puzzles, and it was funny as heck. Sort version: If you haven’t played it, Play It Now. (And its sequel, for that matter.)

If you’ve never played it, the basic idea is this: You have a gun that shoots portals. The left trigger shoots orange ones, the right trigger shoots blue ones (or maybe it’s the other way around? No matter) and these portals are, like, a mini-wormhole. You walk through this one and you walk out of that one. If you set them up just right, you can even see yourself through this wormhole. Observe: 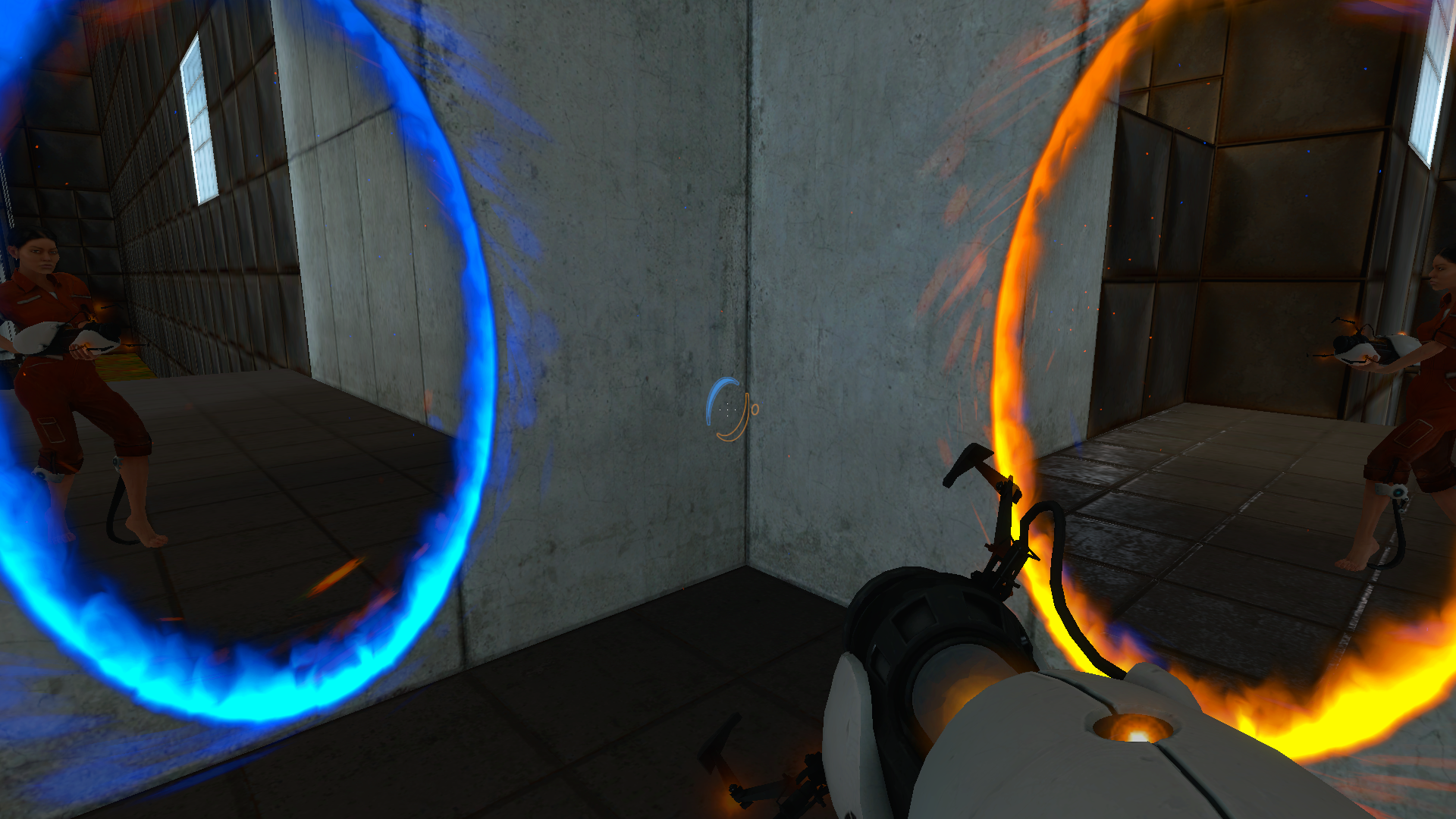 You have to do various physics puzzles to get to the next room. Stuff like “create a portal to get to the weighted cube, then create a portal to place said weighted cube on the pressure-activated button, then, now that the button has been pressed, use the portal to go to the next room”. Eventually, the games require some amount of timing and skill so, sadly, if someone is all thumbs the game might be inaccessible in the later levels, but the core gameplay is solid and interesting and there are various monologues given to you as you do the puzzles (or walk from here to there) and the monologues are laugh-out-loud funny.

The setting, you see, is that you are in a testing facility. The monologue is given by GLA-DOS, an artificial intelligence who explains to you the importance of science, the importance of testing, and demonstrates that its understanding of humans is rudimentary at best. As you proceed through the tests, you look up and you see various windows looking down at the testing floor… you can see fuzzy outlines of desks, chairs, computers… but you never see another entity. No one is looking down on you as you do the tests. The AI makes various promises about this and that and makes reference to how, after the testing is over, there will be cake. As you explore this seemingly abandoned testing facility hearing this AI talk to you about science, you eventually find a hidden alcove where one of the test subjects before you has written a handful of warnings on the wall. One of the warnings is that “the cake is a lie”.

In the game, the statement is dark as heck. “Don’t trust the voice”, it tells you.

And the things the voice says, once you know you have reason to not trust it, are dark and funny and brilliant.

Well, “the cake is a lie” became this huge meme and it got written on t-shirts above artwork featuring a cake for some reason (“Ceci n’est pas un gateau” would, at least, be funny!) and people who had never played the game started yelling “THE CAKE IS A LIE!” and laughing.

Anyway, it got me playing the games again and, holy cow, they still hold up. You should play these games. You probably already have them in your Steam Library and have merely forgotten that they were there. If you find yourself between games, just pick these up again. Holy cow, they’re still good. They’re still fun. They’re still funny. And the cake thing isn’t even irritating in context.

So… What are you playing?