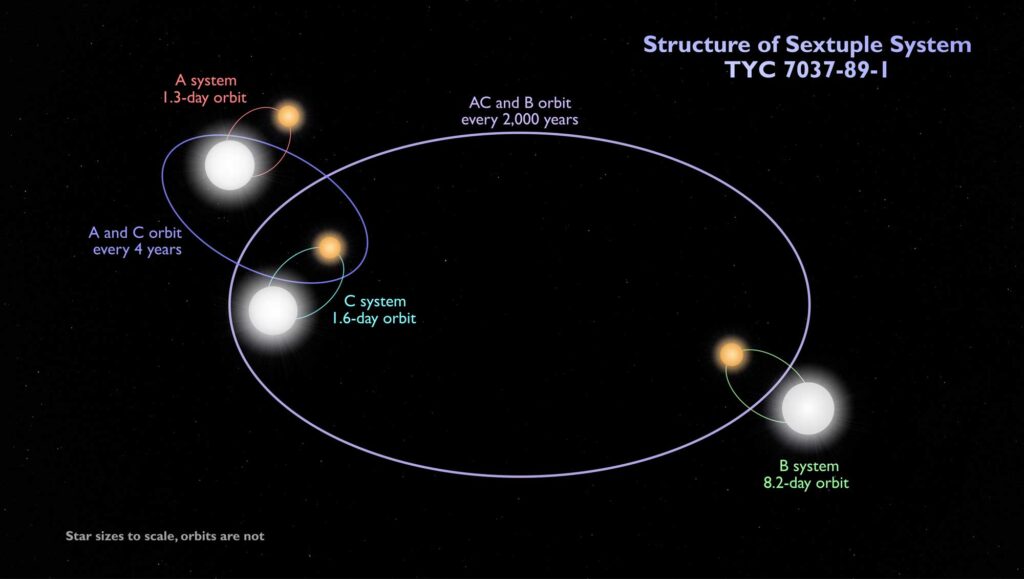 This schematic shows the configuration of the sextuple star system TYC 7037-89-1. The inner quadruple is composed of two binaries, A and C, which orbit each other every four years or so. An outer binary, B, orbits the quadruple roughly every 2,000 years. All three pairs are eclipsing binaries. The orbits shown are not to scale. Credit: NASA’s Goddard Space Flight Center

[ThT1] Almost thirty years ago, when I was an undergraduate student, we knew of precisely zero planets outside of our Solar System. And our knowledge of other star system was still somewhat limited, particularly when it came to faint stars and multiple stars in the same system. We had some pretty good ideas but those were mostly based on studying our own star and its contingent of planets.

What a difference a generation makes. We now know of thousands of planets outside of our Solar System and have learned that, rather than being similar to our own, planetary systems can be unique as snowflakes. Jupiter-like planets so close to their star they whip around every few days as their atmosphere is blown off. Systems that have a half-dozen planets in the habitable zone. Planets around binary stars. Planets around dead stars. Planets everywhere — hundreds of billions in our Galaxy alone.

We’ve also learned a lot more about stars. Stars so faint they barely give off light. Brown dwarfs that are failed stars. Some of the stars nearest to our own. And multiple-star system beyond count and with a diversity and complexity of their own.

Last week, NASA announced the discovery of one of the most unique systems we’ve ever seen. Behold TYC 7037-89-1.

This schematic shows the configuration of the sextuple star system TYC 7037-89-1. The inner quadruple is composed of two binaries, A and C, which orbit each other every four years or so. An outer binary, B, orbits the quadruple roughly every 2,000 years. All three pairs are eclipsing binaries. The orbits shown are not to scale. Credit: NASA’s Goddard Space Flight Center

The system, also called TIC 168789840, is the first known sextuple composed of three sets of eclipsing binaries, stellar pairs whose orbits tip into our line of sight so we observe the stars alternatively passing in front of each other. Each eclipse causes a dip in the system’s overall brightness. Astronomers designate the binaries by the letters A, B, and C. The stars in the A and C systems orbit each other roughly every day and a half, and the two binaries orbit each other about every four years. The B binary’s members circle each other about every eight days, but the pair is much farther away, orbiting around the inner systems roughly every 2,000 years. The primary stars in all three binaries are all slightly bigger and more massive than the Sun and about as hot. The secondaries are all around half the Sun’s size and a third as hot.

This system does not have planets that we know of and the closeness of the binaries may prohibit that (although there could be some further out). But this discovery came from the TESS mission, NASA’s next-generation planet-finder that is scanning the nearest stars and hoping to find 10,000 or more planets. This is some amazing new science to come out of the mission.

[ThTh2] Did the lockdowns cause a spike in planetary temperature? Maaaaaaybe. The effects of human activity on the environment are complex. But two things we know of directly affect the temperature of the planet. The first is global warming, in which a number of gasses — mostly carbon dioxide — trap heat within our atmosphere, slowly raising the temperature of the planet. The second is atmospheric soot — sulfates and other aerosols that block sunlight. These contribution to what is called “global dimming”, a reduction in the amount of sunlight hitting Earth in the first place.

Occasionally, you will hear climate deniers say something along the lines of, “In the 70’s, everyone was talking about global cooling and thought we were entering an ice age, so why should we believe in global warming?” This is mostly a lie, but there is a kernel of truth within it. Global warming theory actually dates to the 19th century and was well-established enough by the 70s to be the basis of science fiction like Soylent Green, But in the 1970s, we found that the global temperature was declining, not rising. There are a variety of reasons for this, but the short version is that global warming does not always follow a straight line. Like the stock market, it may take short-lived downturns even though the overall trend is up. “Global cooling” posited not that global warming wasn’t real, but that global dimming was stronger. However, this theory was always a bit of a fringe theory and by the 1980’s, it became clear that that the global temperature trend was up, not down or flat. And it has continued to trend upward, with very little pause, for the last half century.

The thing about aerosol pollution is that it doesn’t stay in the atmosphere for as long as greenhouse gases do. So, the abrupt halt in economic activity last year caused a quick drop in global dimming but any effect on global warming will take years to show up, if it shows up at all. So, it’s likely part of last year’s temperature increase was related to this.

But it doesn’t really mean anything, as far as the global picture is concerned. There has been some talk of increasing aerosols in the atmosphere to counter global warming, but it’s a terrible idea. And whatever happened last year, the trend of increasing greenhouse gases and increasing temperatures is inexorable unless we go off fossil fuels relatively soon.

[ThTh3] Oooh. We should start using this.

The Cistercian monks invented a numbering system in the 13th century which meant that any number from 1 to 9999 could be written using a single symbol pic.twitter.com/VRuEx4dkPF

[ThTh4] Is it true that we could be pumping out vaccines at even higher rate if only we stood up to corporate greed and allowed other pharma companies to make the vaccine? No. TL;DR version: this is a new innovative vaccine that only a few facilities in the world can make. Even if a big pharma company decided to help out — and Sanofi is going to since their vaccine candidate failed — it will take months at best to get things going. That was the entire point of Operation Warp Speed — to throw money at pharma companies so they could build manufacturing capacity before they even had the vaccine ready. Getting other companies to do so is more similar to the old timescale of taking years.

[ThTh5] And speaking of vaccines, the Russians are claiming their version, which they were criticized for rolling out before testing was finished, is working just fine. Even assuming this claim is true, that doesn’t justify the decision. They got lucky that the vaccine worked; it could easily be making thing worse. That’s why you do trials.

[ThTh6] Avi Loeb is continuing to push the idea that Oumuamua was an alien spacecraft. I remain dubious. You can read Ethan Siegel (no relation) here on why we remain dubious.

[ThTh7] I’ve mentioned Dark Matter a few times. We may have a new way of looking for it.

[ThTh8] On a personal note, by the time you read this, I will probably have gotten the first dose of Pfizer’s COVID-19 vaccine, which I qualified for from a combination of factors I won’t go into in detail. I will be putting my money where my mouth is on this baby. Hopefully it not only protects me; it protects everyone I come in contact with. I’ll note here if I experience any side effects.