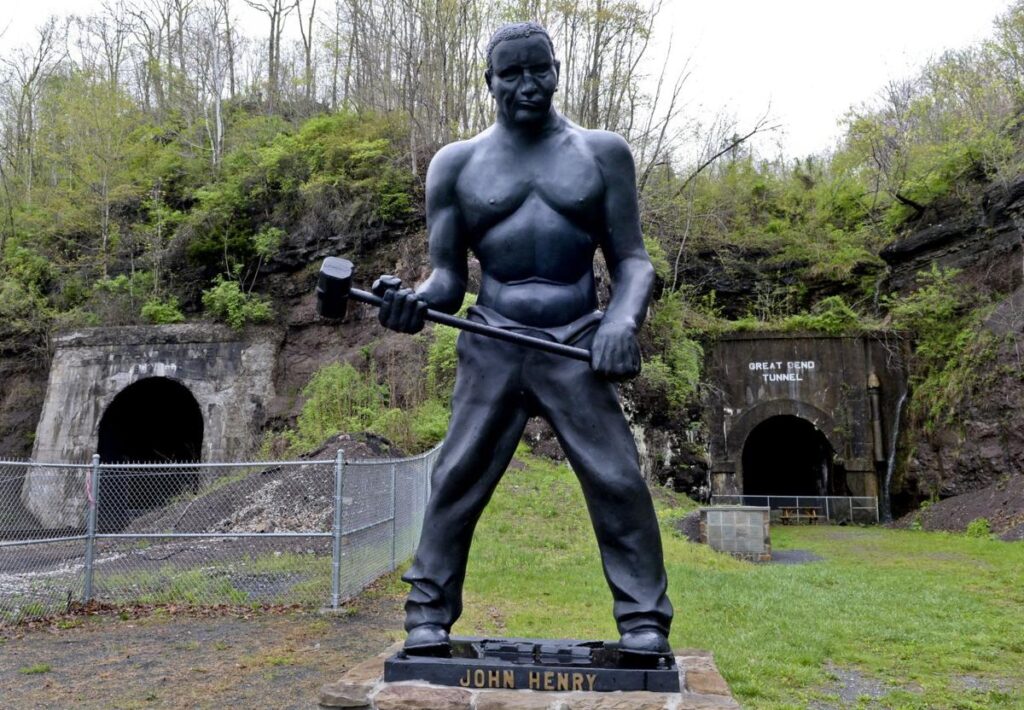 It’s been a slow news week so come with me on a journey into American folklore to a story we all kn–wait, what’s this coming in through my earpiece? The President of the United States and his degenerate allies incited a riot and insurrection on the Capitol building? Sounds like we all may need a distraction…

John Henry is a mythical figure we all learned about at some point in elementary/middle school history class coinciding with the Industrial Revolution. Mythical may be a stretch, because there are hundreds of scholars out there that have devoted their lives to pinning down who the real John Henry was and how he actually died.

Me? I much prefer the folklore aspect, like Paul Bunyan and Pecos Bill, who were not real, but more than likely composites or amalgamations of various other fictional characters from their respective eras. What’s great about these guys is that they are fictional, and their exploits are fictional–as opposed to guys like Davy Crockett, Wild Bill Hickock, and Wyatt Earp (to name a few), who were real life people named folk heroes for their own mostly fictional exploits.

Other than novels, plays, and poems, John Henry has been celebrated in song for close to 150 years. There are other worthy people-in-songs, like John Hardy or Stagolee (Stackolee, Stagger Lee), or even Bob Dylan’s creation, “Rambling, Gambling Willie.” These subjects may see the hallowed digital halls of Ordinary Times at some point.

In any event, I think it is safe to say we all know the story of John Henry. If you don’t, here is the skivvy: John Henry was an African American guy who worked as a steel driver for the railroad. One day, some corporate overlords from the Chesapeake and Ohio Railway (C&O) brought in a steam-powered drill to demonstrate how it could work better than the teams of men currently driving steel spikes. Well, John Henry apparently took umbrage with that and suggested that he, the best steel drivin’ man, compete against it.

To make a long story short, John Henry won, but soon collapsed and died. So, the story goes.

Now, there are a few places in America that celebrate or claim ownership of where John Henry worked and died beating a steam-powered drill. It’s like how there are several Lincoln Log Cabins peppered throughout Kentucky and the Midwest, all claiming to be his birthplace and/or home. The most credible is in West Virginia at the Big Bend Tunnel near Talcott. In the 1920s, a journalist allegedly spoke to an eyewitness of the contest. The contest taking place in West Virginia actually plays right into one of the songs I will be discussing below.

The second place is also in West Virginia, only about an hour north in White Sulphur Springs at a different railway tunnel. It could be argued that the work was done just across the border in Virginia as well. The basis for this location is a bit more recent and outlined in a book authored by Scott Reynolds Nelson, a historian who discovered that John Henry may have been an inmate in the Virginia State Penitentiary. Surviving prison records indicate that there was a 19-year-old African American male by the name of John Henry incarcerated there. Also, this prison leased out prison labor to C&O. This particular prison has been determined to be the site of a whole shit ton of unmarked graves and lost records, etc. So, it almost adds to the mythology a bit.

A few other places that have been floated as sites of the contest are Alabama, Kentucky, or Jamaica!

At a certain point, the legend became song, and the song became legend. It has been “covered,” not in the literal sense, by numerous musicians through the years. Early recorded versions by artists like Woody Guthrie and Pete Seeger were used to bolster labor movements . Earlier than that, the song was sung by workers, which is probably where a lot of the lyrical content is derived from. That’s how folk music works, after all. I think it would be good to start with Woody and Pete and some of their lyrical inclusions and exclusions.

In the Woody Guthrie version, the beginning lyrics discuss his birth, where he may be from, and allude to him being a prisoner. What follows after this bit of exposition is the arrival of the steam-powered drill:

John Henry, when he was a baby
Settin’ on his mammy’s knee
Picked up a hammer in his little right hand
Said, “Hammer be the death of me, me, me
Hammer be the death of me”
Some say he’s born in Texas
Some say he’s born up in Maine
I just say he was a Louisiana man
Leader of a steel-driving chain gang
Leader on a steel-driving gang

Pete Seeger changes it up a bit and leaves out the prison labor part and goes right from birth and papa’s knee to the arrival of the drill.

Most of the versions of songs about John Henry in the folk genre follow the same set of lyrics. Johnny Cash’s epic 9-minute version (which I will get to later) expands upon the original form even more. In the spirit of traditional or standard folk song way, there are a few artists who have put their own spin on the story, with or without similar lyrical content. The story is woven in the same fashion, though: man versus machine.

The first song I wanna talk about is a Jason Isbell song from when he was still in the Drive-by Truckers. “The Day John Henry Died” was featured on their album, The Dirty South. I briefly discussed it on Saturday spins a long time ago. I expressed how pointless the contest was, and I still hold true to that opinion–even if it more than likely never occurred.

Jason Isbell knows how to write a song. I think I have expressed that view on numerous occasions here. This one is no exception. Rather than repeat the tale in a way handed down the way a folk singer would, Isbell opted to put a little mustard on it and spin it through a more modern and philosophical perspective.

It didn’t matter if he won
If he lived, or if he’d run
They changed the way his job was done
Labor costs were high

The theme here is futility; though John Henry held a hammer in a “perfect way,” the corporate overlord held onto his labor and exploited it until something newer and cheaper came along. It didn’t matter if he won the contest; progress left him behind because “labor costs were high.”

Not all of these songs have a folk background per se. Many of the songs related to John Henry were rooted in so-called “hammer songs” sung by blues musicians of the deep south. Mississippi John Hurt wrote the song “Spike Driver Blues” in 1928 and it is told from the perspective of the hammer. Blues music in any form has similar attributes to folk music, hence why there are several standards that are performed in many different ways by various artists.

Blues-rock musician Joe Bonamassa released an album called The Ballad of John Henry in 2009. The title track is a reconfiguring of Mississippi John Hurt’s 1928 song. With a very Tom Morello sounding riff, Bonamassa gives his own version of the legend with some epic flare and discussion of good versus evil.

The song was originally a ballad that spike drivers would sing in cadence with their spike driving work. The lyrics, again focusing on the hammer, are about not letting the work kill them like it did John Henry.

Bonamassa mixes the two themes from the folklore into one. Was John Henry merely a worker on the railroad or was he a convict doing time and doing work? Both of these songs are a bit of a departure from the original folk song, but the common thread of socioeconomic status and man versus machine still remain.

Not long ago, I was extolling the virtues of Steve Earle’s latest LP, Ghosts of West Virginia on my 2020 “best of” list and not long before that it was a Saturday Spin on this here website. Since the most credible version of the legendary event took place in West Virginia, it was only right that Earle includes his own spin on an album largely dedicated to 29 miners that lost their life due to a careless coal baron.

Steve blends the classic tale into a story about miners voting to join the union, but then the corporate owners bring the machines to replace them, effectively negating the union. Before that though, some exposition telling the tale of John Henry:

In keeping with the tradition of adding more to the story or telling it in a new and creative way, Earle describes how mining coal is hard and slow work with very little reward for the common worker. The workers then unionize, but the coal barons get the last laugh by bringing in the machines to replace them. Earle says that, “John Henry could have told them what that means.”

The Earle family, being the excellent folk and folk country singers they are, have both dipped their toes into songs about John Henry. Justin Townes Earle wrote a John Henry song for his second full length release, Midnight at the Movies. His version is steeped in the labor perspective and with a little religion thrown in for good measure.

JTE’s death was a tremendous loss to music in general. His writing and performing really struck a chord:

I think of all these tracks, this one might be my favorite. The ending verse really hits home:

Finally, the last song I want to talk about is by the Man in Black himself. Johnny Cash’s version is a huge amalgamation of all of the themes discussed above. Originally released on his album Blood, Sweat, and Tears, he wrote “The Legend of John Henry’s Hammer” in conjunction with June Carter.

This song is a true ballad, it’s very long, and very, uh, thorough. It follows in the same trajectory as the Woody Guthrie and Pete Seeger versions. It has similar lyrical content in the verses, but in keeping with the folk tradition, Cash adds a bit more to the story in each verse.

John Henry’s Papy woke him up one midnight
He said before the sheriff comes I wanna tell you, listen boy
Said learn to ball a jack, learn to lay a track, learn to pick and shovel too, and take my hammer, it’ll do anything you tell it to
John Henry’s mammie had about a dozen babies, John Henry’s papie told tale about a dozen times
The babies all got sick and when the doctor wanted money, he said I’ll pay you quarter at a time, startin’ tomorow, that’s the pay for a steel driver on this line
Then the section foreman said hey hammer swinger, I see you brought your own hammer boy, but what else can all those muscles do?
And he said, I can turn a jack, I can lay a track, I can pick and shovel too

Anyway, the rest of the epic song is pretty much the same trajectory. Give it a listen.

I am interested to know if there are any I missed that are your favorites? Always down to hear some new music.

The site crashed and has been recovered with reduced functionality. Load times still not great. Devcat is doing what Devcat can.