It’s Not Just About A Speech: Impeachment and President Trump 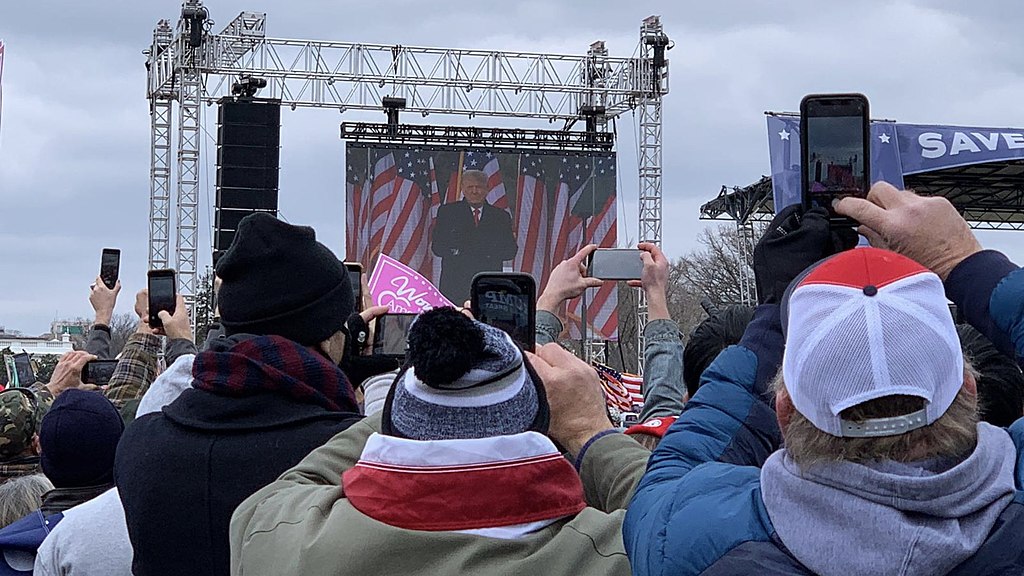 President Trump and crowd at the “Stop the Steal” rally January 6th, 2021 in Washington DC. Photo by Voice of America, [Public domain] via Wikimedia Commons

It is now a week since supporters of Donald Trump assaulted the Capitol, leaving a nation shaken and five dead. Over that week, we have seen Congress first demand that Mike Pence enact the 25th Amendment and then, belatedly, draw up articles of impeachment. I’m not sure how far this will go — the Democrats will still need 17 Republicans to join them if they want to remove Trump from office. But there has been a growing debate about whether this is an appropriate response with a particular focus of just how much culpability Trump bears for what happened.

Attention has particularly focused on the speech he gave to the crowd that subsequently marched on and the invaded the Capitol. Our friend Vikram has gone through that speech to focus on what exactly Trump said, and our friend Em has looked at the legal aspects of whether Trump bears any direct legal responsibility. Those are both very good pieces, and you should read them. But I want to emphasize something important that they both touched on:

This isn’t just about Trump’s speech.

Let’s review some of the events and actions that led up to Wednesday’s riot:

I’m leaving off anything related specifically to the attack itself because we are still learning what happened that day. We know that the FBI had warnings of potential violent acts; warnings that were ignored. We know that Trump rally had far less of a police presence that such rallies normally have (or had been requested). We know that the Capitol Police were vastly outmanned. And we know that it was at least a couple of hours before the National Guard were called in (apparently, bypassing Donald Trump, who resisted sending them in). We will learn more as time goes on, but this is shaping to be Trump’s Benghazi moment, only where the terrorists were encouraged by him and the claims of stand-down orders and abandoning those under siege are true.

The point is this: the events on January 6 were not a one-off. They were not an unpredictable surprising cataclysm. They are the result of years of conspiracy mongering, months of irresponsible rhetoric, weeks of lies and days of turning his supporters against his own Vice President. We are extremely lucky that it was not worse. Like “hostages and executions” worse. While some Capitol police appear to have been friendly to the protesters, other blocked doors at the risk of their lives, led rioters away from vulnerable points and hustled Congressmen to safe areas.

Nor have these events stopped Trump from encouraging violence. After spending a week incommunicado, he emerged today to say he takes no responsibility for the events, that his speech was perfect, and that impeachment will only cause more violence. This is after the Biden team has cancelled most inauguration events and DC is on lockdown until after the inauguration because they fear another attack by the President’s supporters. This is not the response of a President shocked by a tragedy; it is the response of a terrorist, threatening further violence until he gets his way. And, like most terrorists, there is no way to appease him. Those threats will loom and possibly be acted upon so long as Biden is going to be sworn in as President.

Moreover, this saga doesn’t necessarily end on January 20. Donald Trump is going to spend the rest of his life insisting that he won the 2020 election and that he is the real President. He will be encouraging people to break laws, encouraging states to ignore laws, encouraging more violence, more resistance. Not resistance in the hashtag sense where people bitch on Twitter but actual resistance like we saw on Wednesday that gets people hurt and killed.

Trump will not be impeached before Inauguration Day, as Andrew notes. But even then, removal from office is only one of the possible outcomes of impeachment. He can be censured. He can be deprived of Secret Service protection or retirement. He can be barred from further office.

But impeachment should happen one way or the other. Because we cannot allow a President to stoke violence, threaten violence, enact violence and then say, “Eh, whatever. He’s only got a week left.” This wasn’t a protest that got out of control. This was the culmination of a years-long stoking of a dangerous violent movement. Over the last two months, it came to focus on the goal of overturning a lawful election, a goal that was shared and egged on by the President of the United States. And on Wednesday came the inevitable explosion. You can’t just let this slide.

I am not a fan of the “setting an example” school of law but I think this is one case where it applies. What message do we send if we fail to punish Donald Trump for his role in this? The message will not be “don’t do this”. No, the message will be, “Next time, send a bigger mob”.