A Reverie On Failure Part 1: Walking Into a Warm Meadow with a Leather-bound Journal

When Kevin gave me this leather-bound journal, I forthwith resolved to keep a journal of my Fall 2020 hunt. I was expecting to wax eloquently on the virtues of nature, the prowess of yours truly as a hunter, and the thrill of victory. In it I would weave jewels of wisdom and insight so that the reader would coo with delight, “Ooh…aah! He’s a renaissance man! He’s a player! He’s got that extra something to which humanity should aspire!” Yes, dear reader, the leather-bound journal became my set of waxen wings, and I flew too close to the hot gunpowder, and I crashed home from the woods completely skunked. Not literally, hunting gods be thanked, but skunked, goose-egg, zero, a freezer full of shame and embarrassment. 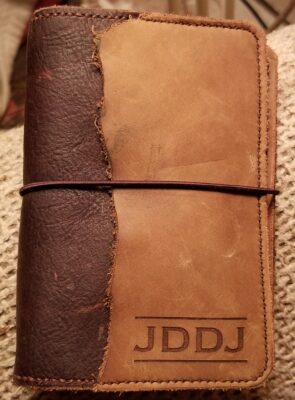 I faithfully kept the journal, though, even when all hope was vanquished, up to, but not including the last sunset of the last day, when I ran to my room and threw down all my hunting gear and didn’t get out of bed for eighteen hours. So be it. Jewels of wisdom and insight? Perhaps sequins of wisdom and insight, but the good kind, not the cheap stuff, so the weaving does have some value.

What sequins? Well, upon re-reading it, I see some themes on nature, of course, as well as neighborliness, human nature, some introspection (I’ll try to avoid navel-gazing, but I’m not making any promises), the ethics of eating, and a few other things of interest, not to mention the day I stood in a tree during the most violent windstorm I have ever endured out-of-doors, second to that time my Dad and I got caught by a tornado in a ravine, but more frightening because my Dad wasn’t there to tell me how stupid I was or to use his body to protect mine.

By way of setting: I live in Buffalo, a smaller-metropolitan area of about a million people. I can leave my house, drive to a friend who lives below the Niagara Escarpment, dress for the woods, and be in place within an hour or so, depending on how long Mike wants to talk. Mike owns some acreage and has access to roughly a hundred acres of woods and farmland, perfect “edge” habitat for deer and turkey hunting. Mike is twenty years older than I am. I was born in 1973. I also hunt with my friend John, who is my age, on his 20 acres. This year, however, John was scarce, and I got the vibe that the domestic situation was less-than-ideal for my coming out while he was away. So, unless otherwise noted, I’m hunting with Mike.

A note about the area: Niagara County, New York has a population density of about 400 people per square mile. It is difficult to say what the density of the exact area I hunt would be, but while this is technically a rural part of the country, it is hardly empty. This will be a continuing theme throughout this series.

Here is my journal which I kept from October 5 to December 21, edited for readability, followed by periodic commentary.

A friend mentions that the woods-hills-mountains are head-clearing. This is true. The activity of the woods, even if you can hear road traffic and farm machinery is…well, what is it? Activity is all-encompassing, yet barely perceptible. I’ve managed to lay my eyes on a few birds, a bee, and a few squirrels, but, with the wind, it is a veritable cacophony in here. There is “activity,” see. It forms an umbrella under which the man comes, so that the machinations of civilization are driven out. I can hear crickets now, the drones of the edge habitat, upon which birds build their harmonies. Some sort of bird, I think, is tapping out percussion. With such noise and noises, the man’s mind rests. I don’t know why. I think an awful lot in here, yet my mind rests.

I admit: I was anxious about something, very anxious—a particular anxiety which is still on my mind, yet it rests. Even thinking about this anxious thing sets it at rest. I am decidedly not hunting, either. I’m waiting for a while before that starts—the nature of early season archery hunting. Now there is a percussive clucking in a tree. Is it a bird or a squirrel? Squirrels squawk, though.

As the sun goes down, new sounds emerge, and now excitement builds. An hour before “time” I see a turkey in the open. Heart rate up. It begins!

Wind and rain coming in. Not a drenching, but a disturbance of the order of things. The sun has conquered again, but it looks to be a fleeting conquest. There’s an anxiety in the woods: the birds are uncomfortable. The blue jays are going crazy in all parts of the field. Usually, if you can pinpoint their location, you’ve found where a large mammal is moving, but I doubt that’s what is happening right now. The songbirds give it away: something is amiss this evening. Even so, the drone of the crickets is unchanged. That alone has driven out my daily anxieties, and until I mentioned them just now, I had forgotten them.

A friend of mine just told a bunch of us [I couldn’t break my addiction to the phone –J.D.] that the virus culture has hurt his marriage; they are anxious about money and employment. That’s far more significant than my petty worries. I’ll pray to Jesus to comfort him and relieve them.

I hope I see that buck again, and that he doesn’t spook this time.

Another squall line approaches. Whenever I see one these I’m reminded of my days on the Gulf Coast: the summer storms, and, on rare occasion, being out on the water, boating along the shoreline, when one of these squall lines sneaked out of the woods. At any rate, I think darkness will fall early this evening. We’re ninety minutes from sunset, but that’s a black line of clouds. 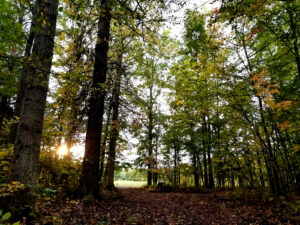 The cliché part of any nature journal is now complete. I think a paean or two to nature yet remain, but for the most part, I got that out of my system as quickly as I could. Cliché has its place, usually up front and brief. Even so, a few points regarding human nature got to dance with these familiar odes.

The early part of the season is about scouting, about developing a feel for the woods as it is, not as you wish it would be, about experiencing a hundred thousand different repetitions so that when that one repeating element of the woods hesitates for a single eyeblink, you move your attention to it. The autumn equinox is still within bowshot, which means that the afternoons are prolonged into a slow setting of the evening. Around here, deer generally filter from the woods into clearings when the sun hits the tops of the trees. In early October, that moment comes over an hour before sunset, so the light is good for hunting for a while. Therefore, you must enter the woods early, prepared to remain there, and still, for a long time, observing and experiencing. As I was to learn, my discipline was poor. Throughout the season, even as a veteran of many years of hunting, I moved too much and too rapidly.