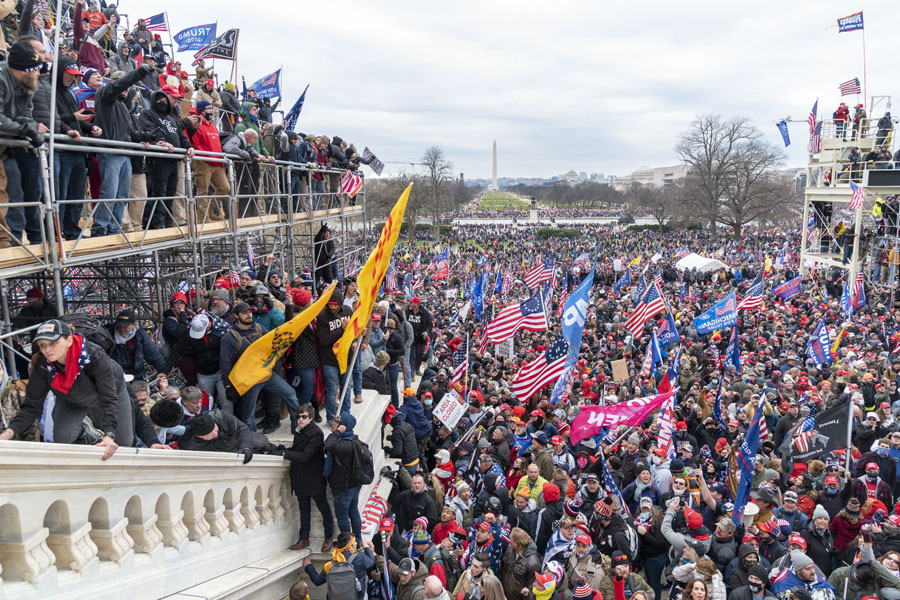 Rioters occupying the west face of the US Capitol, 6 January, 2021. Photo by Blink O’theye via Flicker (CC BY-NC 2.0)

There was what was supposed to happen, and what really happened.

There was this moment where it was all under control. The throngs of the Trump faithful were arrayed in front of the stage, framing the White House beyond, waiting for a rally with the president himself. The usual suspects of Donald Trump Jr. and Rudy Giuliani had worked the crowd up and primed the pump for the main event. The former warning congress that if they choose to go against Trump “we’re coming for you” and the latter blubbering about wanting a “trial by combat.” Then the president took the stage, and all seemed just as it had for the hundreds of other rallies before. Josh Hawley, full of the moment, walked into the capitol building across the line of not-yet-rioters with a raised fist in the air and cheers from the throngs.

Then inside the chamber, the Vice President called the roll of states. The great state of Arizona was called, and Rep. Gosar stood and objected. When challenged by the chair that the objection must be in writing and signed by a senator, he proclaimed “it is” as Ted Cruz also bellowed “It is!” and dramatically stood. Applause filled the right side of the chamber of those who had planned for these objections to be their moment to shine, to speechify, to pound their chests and talk directly to the camera about how much they love America and hated wrongdoing and needed to right the wrongs and blah, blah, blah…

It was all under control, you see. It was all so carefully planned. Choreographed. Staged. The Show of Shows on this Day of Days for the Make America Great Again faithful. Today was the day.

“We’re going to walk down to the Capitol and we’re going to cheer on our brave senators and Congressmen and women,” Trump told the crowd from the stage. “We will never give up, we will never concede,” he promised to cheers, chants of “bullshit”, and the long drone of “fight for Trump.” And they did go down to the Capitol, while the president went back to the White House, put his feet up, and settled in to watch the show as the throng approached the barricades, an optic of displeasure both within and without the capitol that would grace fundraising, advertising, and political lore for a generation to come of what should have been. The coda to two months of swearing that the election had been stolen, setting up MAGA 2.0 for the future. Just as it was planned.

Not all of MAGA signed up for what came next, not every Trump voter or wearer of a red hat, or waver of a Trump flag, sought to break laws, attack buildings, fight with police, and wreak havoc. But recent history and video of the present along with the real time commentary of their social media accounts tell us who did what. For the true believers, the crazymakers, the unpersuadable who for five years now have drank deeply of that draught the integrated grifter set kept flowing steadily to them, they now have their moment. Their high water mark. Their moment when the reality of the present ripped through the fabric of mortal time and will forever give them their lost cause moment. Like a bizarro-world MAGA Faulkner they will now tell the tale to their children’s children’s children.1

It’s all now, you see. Yesterday won’t be over until tomorrow and tomorrow began ten thousand years ago. For every MAGA diehard of age to remember, not once but whenever they wants it, there is the instant when it’s still not yet noon on that January afternoon in 2021, the marchers are in position behind the steel temporary fencing. The cell phones are charged and ready to record and the furled flags are already loosened to break out and Trump himself with his blonde coifed mass of hair and his gloved hands probably and his sword-like tongue spouting off looking up the hill waiting to give the word and it’s all in the balance. It hasn’t happened yet, it hasn’t even begun yet, it not only hasn’t begun yet but there is still time for it not to begin against that position and those circumstances which made more men than Cruz and Hawley and Gosar and Gohmert look grave yet it’s going to begin, we all know that, we have come too far with too much at stake and that moment doesn’t need even a MAGA diehard to think this time. Maybe this time with all this much to lose then all this much to gain: Pennsylvania, Arizona, Georgia, the world, the golden dome of Washington itself to crown with desperate and unbelievable victory the desperate gamble, the cast made four years ago…

The President’s diehard supporters planned this, relished in it, wanted it, begged for it. They had scared hotel owners into shuttering up shop rather than host them. They antagonized and accosted the most mild-mannered of politicians on their way to the district. They bragged on social media for days ahead of time, proudly recorded themselves every minute of the before, during, and after. The rioters who stormed the Capitol can say whatever they want about anything they want but their actions drown out all words. They did what no one has dared do before, where no one had dared to do it. The Capitol of the United States of America, according to their shouts, was theirs to do with as they please, a giant scratching post for them to alleviate their various political and cultural itches. It was a criminal display of selfishness and thuggery, of people wholly given over to their own desires and passions to the point that things like country and truth and right mattered not, as long as they got their piece of video of them getting their jollies off in the previously forbidden to them halls of American power. Lives were lost, the capitol trashed, and a horrified world and embarrassed America looked on with shock and dismay.

Four years of words, pontifications, promises, and prognostications washed away by the images of the United States Capitol under assault and temporarily cowered for the first time in over 200 years. Not by a foreign enemy, but by a cult of personality masquerading as a political movement being wielded as a weapon to avenge perceived slights.

The diehards will still defend it, their lost cause of Trump too ingrained to let go even now. Laughably, they are trying to blame Antifa, but rather than standing against that destructive group they now more and more closely resemble them in behavior than ever. But for most Americans and the wider world, the images of what the flag-carrying MAGA faithful did here are indelible. No amount of pointing to the civil unrest, riots, and looting of the past year by other people in other places does anything to justify or lessen what happened here. There will be ink and characters spent a plenty on the who and the why and how this all went down. Whatever the result and consequences that occur from the despicable actions of a mob, a president that incited them then went MIA leaving others to deal with the mess, and a nation which now must reckon with it all. Most of the questions will not have easy answers, or at least satisfying ones to an American people that damn well deserve some after their nation was attacked over the political ambitions of a few raining chaos with a firehose of lies.

When epic floods occur where I’m from they paint the high water marks on the bridges and other structures to remind folks of just how far the destructive waters went. The high water mark of the worst of MAGA reached into the well of the US Senate, the barricaded and armed door to the US House of Representatives, and washed through the rotunda where we lay our most honored dead to lie in repose. Congress quickly reconvened and the people’s business won the day while the mob receded into the night, but the speed of return should not lessen what happened, or how much worse it could have, should have, been.

We better never do this again. The flood was high enough this time. Any higher, and we will all be swept away.