Where does the past go?

Is it immediately accessible in some dusty mental storehouse, or lost forever to our fevered minds that endlessly falsify and fantasize? Is it captured for us in smells and sounds and familiar objects? Is it located in some secluded place to which we could travel if only we knew the geography? The word “nostalgia” was coined from the Greek words for “homecoming” and “pain” to describe a condition seen in Swiss mercenaries that sounds more like homesickness; yet, nostalgia feels as if the thing we’re yearning for, our true home, is the past to which we cannot fully return, marooned as we are in the present. 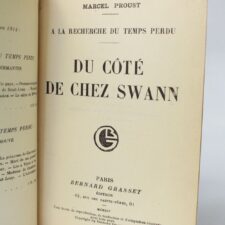 With the new year, I return once more to Proust’s novel À la recherche du temps perdu, a book (albeit in seven volumes) that I have read in my late twenties and halfway through my thirties; I am now in my forties. In a sense, it felt doubly-appropriate to return to Proust in middle age because so much of his novel is about the attempt to snatch our memories from the oblivion of the past.

“In Search of Lost Time” is a ruminative novel that can be easily mistaken for a memoir; a mistake I made when I first read it as an undergrad. I suspect that one influence for the novel was François-René de Chateaubriand’s “Memoirs from Beyond the Grave,” probably the masterpiece of the father of French Romanticism, although one whose length makes it even more daunting than Proust. Chateaubriand’s “memoirs” were perhaps 70% non-fiction.

Another influence would have to be the works of Gérard de Nerval, a Romantic writer for whom my love knows no bounds. Nothing Nerval wrote follows a straight line; his stories wander and roam through endless and labyrinthine digressions; memoirs become myths that slide into histories and blur into hallucinations, often within the same chapter. Nerval often said that all of his works put together make up one long scroll that would only reach its end with his death; and there is nothing quite like his body of work.

But Proust is similarly deft at weaving together memories, digressions, and philosophical musings in a way that feels simply like a busy and brilliant mind at work. It feels organic. I had wondered how easily I would find it to get back into the story, which is not exactly plot-driven, to say the least; but it was as quick an adjustment as sliding into a warm bath. 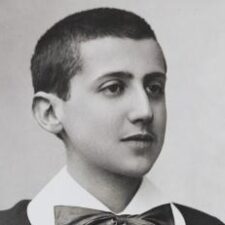 Marcel Proust as a boy

It’s a strange and ingenious way with which Proust gets us into the story: we start begin with the narrator musing about the common experience of falling asleep while reading, in which his consciousness slowly detaches from the subject he is reading; and then waking in the middle of the night confused about where he is and who he is- the latter generally helps us get a grasp on the former. That is, we slowly remember ourselves and put the room together in relation to ourselves. And so, the narrator slowly constructs his own identity. The way that Proust plays lightly with these ideas belies the fact that the construction of a consistent selfhood from fragments of memory and the things at hand will be a central theme of the book.

These musings lead the narrator to recall when he would try to fall asleep as a child in the rural town of Combray where the family would summer. Combray is based on the real town of Iliers. As the enjoyable website Proust-Ink.com explains:

In 1971, to mark the centennial of Proust’s birth, the little town of Illiers, in a brilliant marketing move, officially changed its name to Illiers-Combray. This may be a unique example of a real town taking its name from a work of fiction. 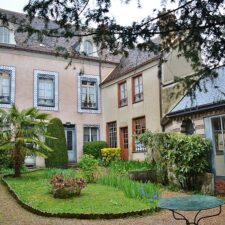 As a young boy, the narrator would have a horrible time falling asleep. His first problem was that his elders liked to illuminate his room with a magic lantern, something that only succeeded in making the room strange and alien to him. A type of early projector, the magic lantern was a common distraction in middle class homes throughout the nineteenth century and into the twentieth; Ingmar Bergman, for instance, remembered them fondly. (You can see a video of a magic lantern in use here.)

The bigger problem was the narrator’s anxious desire to be kissed goodnight by his mama, and thus his frequent disappointment. This problem is particularly acute when the parents have guests, and their primary guest is Charles Swann, the son of a stockbroker who moves in higher social circles than the family imagines. A refined aesthete who frequents Parisian salons, the family cannot remove him from the lower mental category in which they’ve placed Swann; but then, the elder narrator notes, “our social personality is a creation of the thoughts of other people.”

And Swann will later justify their low opinion of him by marrying a low woman, who, the family gossips, “lives with a certain Monsieur de Charlus, as all Combray knows.” But then, many of the characters in the novel will be found to have both a secret life and a social life. 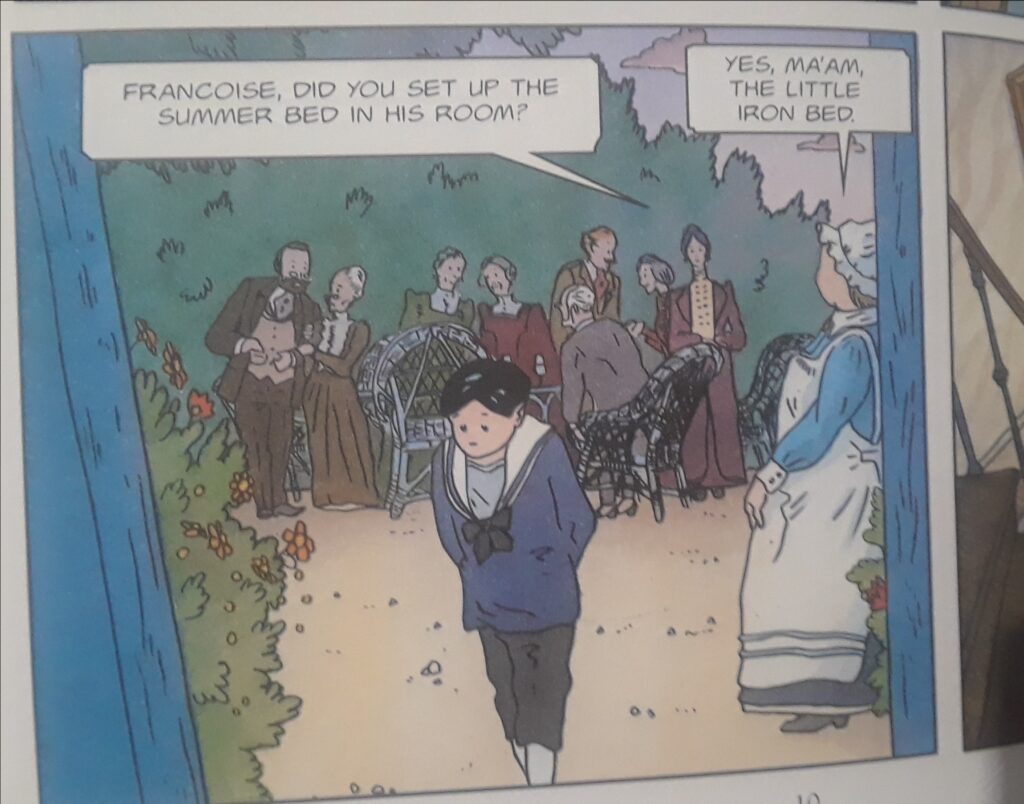 The little boy is anguished, however, because Swann is keeping him from mama, along with her desire not to coddle him, although he isn’t aware of that at the time. She finally gives in to her son and he is happy, although he senses that she has somehow surrendered a bit of her autonomy in doing so. He looks back with mixed feelings on these memories that have returned from his childhood.

Many years have passed since childhood:

The wall of the staircase up which I watched the light of (father’s) candle gradually climb was long ago demolished. And, in myself too, many things have perished which I imagined would last forever, and new ones have arisen, giving birth to new joys and new sorrows which in those days I could not have foreseen, just as now the old are hard to understand… But as of late I have been able to catch, if I listen attentively, the sound of the sobs which I had the strength to control in my father’s presence, and which broke out only when I found myself alone with mama. In reality, their echo has never ceased; and it is only because life is growing more and more quiet around me that I hear them anew, like those convent bells that are so effectively drowned during the day by the noises of the street that one would suppose them to have stopped, until they ring out again through the silent evening air.

It’s something amazing to find in a book of 7 volumes and roughly 1,256,000 words: all of these small details upon which Proust focuses will later be important, even structurally so. His theme is the wonder sparked by the ordinary; let’s call it the “sublime banal”; the way that ordinary details unfold like a paper bird through our focus and attention on them to become things more wonderous and profound. His message seems to be that there really are no superfluous details in life.

It’s appropriate then that I will be taking Proust a bit slower than I normally do. Next week, I will be returning to Volume 1: Swann’s Way. I invite you to join me.

And now, what are YOU reading, watching, pondering, playing, or remembering this weekend?