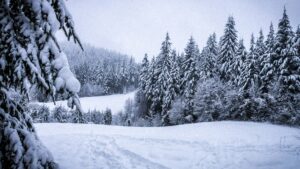 Traditions, it seems to me, hold on the strongest when people come together for a common purpose. My grandmother passed away at 98 this past August, but her recipe for clam dip—devilishly simple but unmistakably hers—lives on, the handwriting from her recipe card magnified and printed on towels for the many households Nana engendered. And so, it will be made at Christmases and Easters and Fourths of July and when little ones are about who never met her, stories of the matriarch will be brought out with the ruffled chips for dipping.

I think of tradition, sometimes, as a traceable thing—a firm lineage which can be traced with certainty though the time that is but ink stains and supposition—but those same things can be discarded, or earned, or not, every time traditions meet.

I remember the first Christmas Eve I spent at the home of my now in-laws. It had the warm firelight cutting the darkness, the laughs and the casual reverence for traditions. But these were not my traditions; I was a visitor from a strange land at the court of a benevolent, but foreign, king.

My future wife and I were engaged at this point—we wasted little time figuring that out, but that’s a different story—but this was the first I’d seen of her family’s peculiar Christmas Eve rite and so I sat just inside the fire circle and watched.

I remember my Mother-in-Law taking out a book and reading from it an Alleged Christmas Tale by Willa Cather. This came with the natural disadvantages for me by being authored by Willa Cather—de gustibus; I’m not a fan—and being about a were-wolf dog which from a logical and etymological perspective is akin to a creature being half man, half bear and half pig.

It was worse than I thought.

I got an extra helping of nostalgia, however, as the new guy. The time my far-travelling now Father-in-Law came back from Scandinavia to serve canned reindeer on Christmas Eve was remembered. The time siblings in a sleeping bag were used as a sled down the stairs was recalled. The incident where one sibling, through the mischief of another, was compelled to, wearing only a towel, climb out one window, cross a small, snowy roof and then enter their room though another window was revisited.

There were many memories shared with varying levels of distinctness that night as I made mine; mine, which would not be so distinct but for what happened next.

My Father-in-Law to-be went over to the record player and put on an LP.

It would not be the old compilation that began with “Angel of the Morning” followed by “Ding! Dong! The Witch is Dead” on it—that was the one that woke the kids up on Christmas Mornings—no, this had to be something different.

There was the soft thump of needle-on-wax, some surface crackle and then, without introduction:

One Christmas was so much like the other, in those years around the sea-town corner now, out of all sound except the distant speaking of the voices I sometimes hear a moment before sleep, that I can never remember whether it snowed for six days and six nights when I was twelve, or whether it snowed for twelve days and twelve nights when I was six.

I’d read it, of course—every self-respecting English major had, and I’d loved it, too—but to hear the voice and words of Dylan Thomas come, by me unbidden into the warmth of the room, brought a fullness and completion to the piece.

To hear a poem read by the poet?—we so infrequently listen to poems from the poet’s mouth—are we to hear the rhythm, the thoughtful, if casual, tread upon the pavement—they who saw thought those tread so innocent upon the pavements.

Is A Child’s Christmas in Wales a story? Perhaps; Thomas said so. Is it a poem? It scans and sounds like one; the fundamentally oral nature of poetry is the breath, the wave that carries the thing along. But it is so much more—so much itself—that to try to build anterooms to conventions that A Child’s Christmas in Wales might live there more comfortably is to fuss over irrelevant details.

A Child’s Christmas in Wales is itself, and in being itself it speaks to variegated experiences beyond its author’s own knowledge.

Perhaps I have gone too far, too fast.

James Joyce famously said, “I always write about Dublin, because if I can get to the heart of Dublin, I can get to the heart of all the cities in the world. In the particular is contained the universal.” That is, if one writes about a common experience in a particular place, those who have had their own similar experiences in other places can relate.

Of child’s, Christmas and Wales, only the former is firmly set. These are childhood reminiscences colored by nostalgia, blurred by the blizzard and ferment of memory and rounded and softened like a river stone through years of adult treasure and well use.

And it’s beautiful. It begins with a vignette about the boys helping to put out a fire using snowballs and ending with the deft humor of Miss Prothero saying, “Would you like anything to read?”

It is followed by one of my favorite sentences in the English language—if anyone would like to diagram it, they are welcome to it; the result is, I imagine, a grammarian’s La Sagrada Familia—it is purposefully curved and fulsome and complex, with the rounded snap of terminal p’s and encompassing, broad initial w’s. If you can’t listen to the recording below—or even if you can—speak it out loud: hear every consonant and every vowel as you say them, eyes shut, to whomever or no one. Read it, hear it, let it fill your mouth and the room about you:

This is followed by a dialogue between the narrator and a small child—the recipient of memory; we tell these tales to reinforce them and to transmit them anew—about postmen and presents, childhood concerns, warmly and reverently and expressively handled. The gifts are part of the experience, perhaps even a vehicle for it, but they are not the whole of it.

The poem and the writer and the reader—no! the hearer, the listener—are shoved, as by an elder, know-it-all sibling, into a zoetrope of childhood memory and emotion which fills and warms the last days of the year.

May it fill and warm each and all of us.

I suspect—but I cannot say, I’d love to hear one way or the other—that the particulars of Christmas and Wales contain the universals of Family Gatherings, religious observances or otherwise, and everyone.

Every family has its own carried traditions, with their own complex patterns of transmission. Even if my Father-in-Law had not gifted my wife and I with a CD copy of A Child’s Christmas in Wales it was, from the first intonement after the needle-drop, a tradition to be carried in our family. I suspect that there are particular traditions found in every family whether they celebrate Christmas or not.

These traditions are treasured things, when we hold them dear and pass them on. Others, like were-wolf dogs, can be cast away, when we choose to do so. But we should make these choices in full awareness of what we lose and what we keep and the things we treasure should be brought out like my grandmother’s clam dip: meaningful, welcome and understood tokens of the people, influences and ideas in whose soup you were, at first, cooked.

For myself, I hold these things in the “close and Holy darkness” and head to sleep.

The recording in question can be heard here

Whatever holidays or gatherings you might observe — or not! — in the past or coming days, I give you glad tidings.

Tags: A Child’s Christmas in WalesChristmasfamilyliteraturepoems