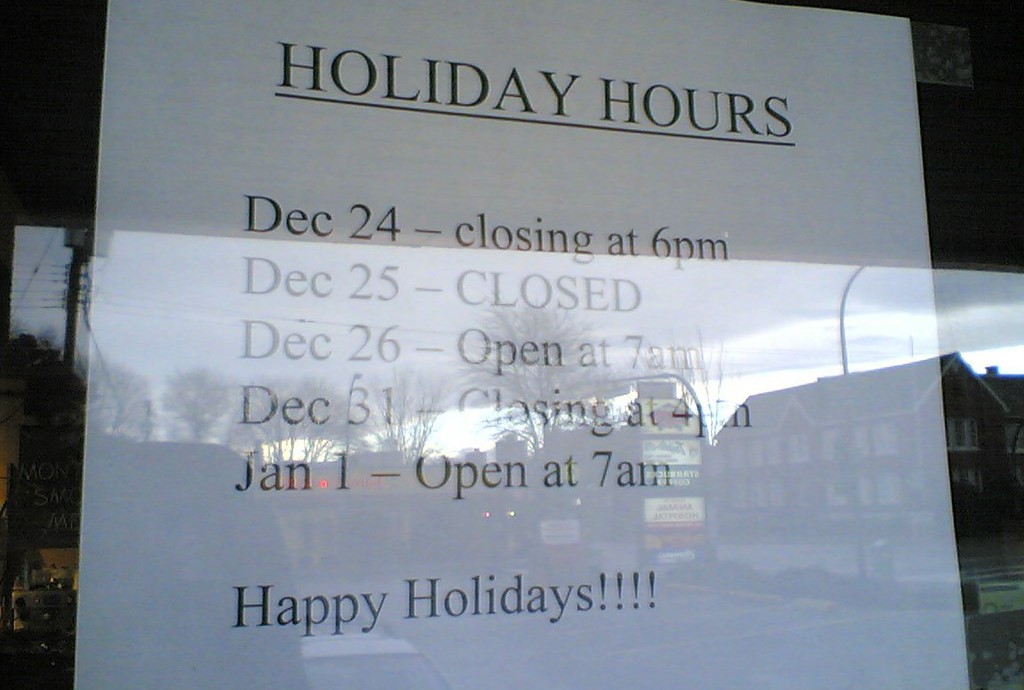 The War on Christmas, declared over with the election of Donald Trump in 2016 but apparently poised for a resurrection now that heathen Democrats are in office, goes back a long way. Last year about this time, our case of the week was 1984’s Lynch v. Donnelly, a fight in the town of Pawtucket, Rhode Island over the constitutional propriety of the town Christmas display, which featured both secular and religious elements.

A decade and a half later, Ohio resident Richard Ganulin sued the federal government for making Christmas a public holiday, alleging a violation of the Establishment Clause and his right of equal protection. Three federal employees intervened, interested in protecting their employment benefit, and moved to dismiss the case on failure to state a claim and lack of standing.

Our case of the week, Ganulin v. US, went before federal court Judge Susan Delott of the Southern District of Ohio. Addressing standing, Judge Delott noted that abstract injury was not enough; a claim that a government action violates the constitution because it affects the interest of all citizens “in the proper application of the Constitution and the laws, and seeking relief that no more directly and tangibly benefits him than it does the public at large” lacks standing (quoting Lujan v Defenders of Wildlife, which addressed the three factor test of standing: injury in fact; a causal connection between the injury and the action complained of; and redressability.) However, the Court noted that in the past, contact with a religious display on state property or a portrait of Jesus in a government building has been enough to convey standing. Delott also analyzed “taxpayer standing”, recognizing that courts have found taxpayer standing only in limited Establishment clause cases, such as those involving Congressional appropriations for religious purposes.

Applying her analysis to Ganulin’s claims, Delott first considers his claim of psychological injury: from feeling like a “political outsider”. Psychological injury has not been found to be a cognizable injury which can support standing. Secondly, the possibility of redressability: Delott predicts that, even without the government sanctioning of the holiday, most Americans would continue to celebrate it anyway, and “personal satisfaction that the constitution is being upheld” is not a remedy that can confer standing. Finally, the Court found that the government was not directly paying taxpayer funds to religious entities or activities, such as nativity scenes or religious education materials for parochial schools, finding the connection between the claimed injury and the government action.

However, Delott conceded that it was not impossible that Ganulin could prove some set of facts that would show an injury other than psychological, such as the inability to access government services on Christmas Day. Finding it a “close call”, the Court denied the Motion to Dismiss based on standing and moved onto the defendants’ “failure to state a claim” argument.

Judge Delott applied the three-prong “Lemon test” (from Lemon v. Kurtzman) to determine whether Ganulin’s Establishment Clause claim was valid. The first prong: to survive the test, a statute must have a legitimate secular purpose. The general rule is that if the government articulates such, it should be given deference. On this point, Ganulin’s argument is straightforward: Christmas celebrates the birth of the central figure of the Christian religion (and also the arrival of “the legendary Christian figure, Santa Clause”;) ergo, the declaration of the occasion as a public holiday is necessarily religious. The Court does not deny this conclusion; however, Delott writes that the government may still “merely acknowledge” the sectarian aspects of the day while still meeting a secular purpose. The Court sites several cases which note the modern non-secular trappings of the holiday, the fact that other religions’ holidays happen around the same time, and that a great many people expect to be off work that day, be it for religious or secular celebrations. The Court reasoned that the government has declared the holiday for convenience for their employees, who might otherwise call off work en masse.

The second prong: the government must show that their act does not endorse a religion, in the eyes of a reasonable observer. Judge Delott reasons that granting a holiday that has the effect of facilitating a particular religious belief is not the same as endorsing that belief, in contrast to, for instance, a federal proclamation that Jesus is the Messiah. It is simply a recognition of the cultural significance of the holiday.

Finally, the third prong of the test is entanglement: does the government action impermissibly entangle religion with state? Calling this test “a question of kind and degree,” Judge Delott points out that while the holiday applies equally to all employees, how they spend the day is of no concern to the government. Employees are not required to celebrate the holiday in order to get the day off. The statute creating the holiday does not require the government’s participation in religious activity, nor does it provide any funding for religious activity. The court held that there was no entanglement:

The Court holds that under Sixth Circuit and Supreme Court precedent the establishment of Christmas Day as a legal public holiday does not violate the Establishment Clause because it has a valid secular purpose, it does not have the effect of endorsing religion in general or Christianity in particular, and it does not impermissibly cause excessive entanglement between church and state.

In sum, Judge Delott ruled in favor of the government. It’s a pretty run of the mill and unexciting case – but it’s case of the week for a reason, and the reason is the opening to Judge Delott’s opinion:

WHATEVER THE REASON CONSTITUTIONAL OR OTHER

CHRISTMAS IS NOT AN ACT OF BIG BROTHER!

CHRISTMAS IS ABOUT JOY AND GIVING AND SHARING

IT IS ABOUT THE CHILD WITHIN U.S. IT IS MOSTLY ABOUT CARING!

ONE IS NEVER JAILED FOR NOT HAVING A TREE

FOR NOT GOING TO CHURCH FOR NOT SPREADING GLEE!

DECREEING “THE ESTABLISHMENT” AND “SANTA” BOTH WORTHWHILE “CLAUS(es)!”

WE ARE ALL BETTER FOR SANTA THE EASTER BUNNY TOO

AND MAYBE THE GREAT PUMPKIN TO NAME JUST A FEW!

AN EXTRA DAY OFF IS HARDLY HIGH TREASON

IT MAY BE SPENT AS YOU WISH REGARDLESS OF REASON.

THE COURT HAVING READ THE LESSONS OF “LYNCH”

REFUSES TO PLAY THE ROLE OF THE GRINCH!

FOR DIFFERENT CONVICTIONS AND A DAY OFF TOO!

[WW2] Chicago social worker Anjanette Young, naked and wrapped in blanket, pleaded with the officers who raided her home: you’ve got the wrong house. They, of course, ignored her, and went about the business of searching for a man they’d heard might be there with guns and drugs. There was no such man present, as he had no connection whatsoever to Young. The cops were at the wrong house, based on a tip from an informant. The raid occurred almost two years ago, but has not made many headlines. But the Chicago PD’s attempt to withhold the video of the home invasion has caused a Streisand effect, and Mayor Lori Lightfoot has asked for an outside review. Meanwhile, the Department has made changes, such as “requiring other corroboration” before basing a search warrant on an informant’s tip, which should have been a thing already.

[WW3] Among the many hidden items in the “Covid relief” bill (which Trump is, as of this writing, refusing to sign): strict new online piracy laws. Makes… sense?

[WW4] A teen who broke quarantine rules in the Cayman Islands will serve 2 months in jail, a reduction from the 4 month sentence she initially received. She traveled to watch her boyfriend compete in a jet skiing competition. She attended the event 2 days after arriving, rather than quarantine for the required two weeks.

[WW5] Now that the Sacklers have gone down, the DOJ has a new target of blame for the opioid crisis, accused of filling thousands of invalid prescriptions and failing to report suspicious activities. You thought the Sacklers had deep pockets? Maybe you’ve heard of Sam Walton’s little family operation, Wal-Mart. Much smaller, privately owned pharmacies in my state have gone down for the same things; I’m interested in how this one turns out.

[WW6] The Trump Administration may yet hit its high point in these, its waning days: Joe Exotic’s request for a pardon has hit the Resolute Desk.

[WW7] If you’d hoped to enjoy a nice mug of wassail this holiday season alongside some delicious saw-dust cookies, you’d better hurry. The stick-in-the-mud German courts are trying to take away our God-given American right to go to Karlsruhe, Germany and eat pulverized wood (or order them through the mail). IT IS VEGETABLE-BASED, ANGELA!

[WW8] Some may wonder when President-elect Biden may get his first Supreme Court appointment opportunity. The favorite for next to vacate the bench is Stephen Breyer, the oldest justice by a decade at 82. Does he plan to retire? Yes. When? Eventually.