Filler ‘er Up and Take a Little Off the Top 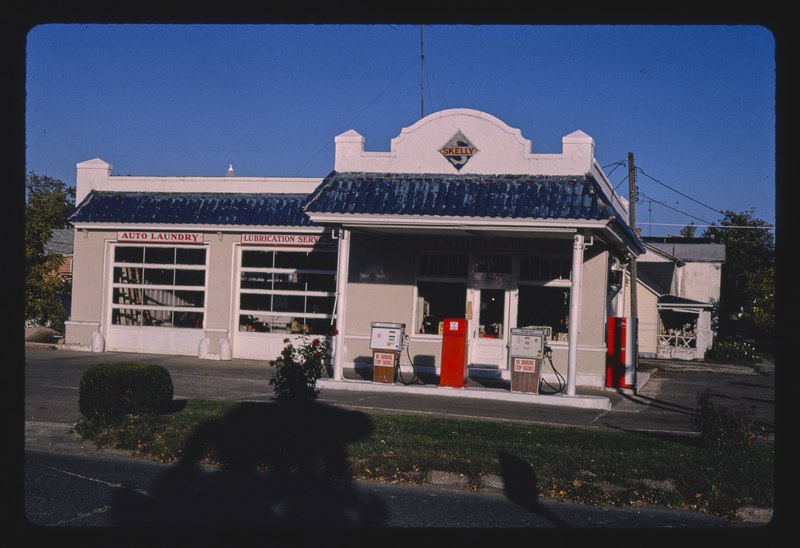 I  pulled into a parking spot next to the grocery store we normally use.  As I sat a moment in the car, I scanned the shops in the our little suburban strip mall anchored by the large grocery chain store.  At the far left was the gas station associated with the grocery chain, then a dentist, a Mathnasium tutoring service, Bach2Rock music instruction for children, a martial arts studio, an ice cream parlor, and a Great Clips hair salon.  I suddenly realized how all these business services were central to my Midwestern childhood. My thoughts drifted as I looked back to the gas station.

At 14, I began my first paying job as a lot boy for the town Skelly station.  I would pump gas for customers when the regular attendant was busy, check oil, clean windshields, refill supplies, and run errands for the owner.  Once, a doctor who practiced at the nearby hospital jumped out of his emerald green Cadillac El Dorado convertible, tossed me the keys, and told me to drop him off at the hospital then bring his car back for an oil change and a wash.  He’d pick it up after his shift. I gave a surprised look to the station owner who simply nodded to me indicating he expected me to do as I was instructed. So this unlicensed 14 year old kid gets behind the monstrous wheel of a shiny ’68 Caddy and drove the doctor to the hospital entrance, then fearfully navigated the insanely expensive behemoth back to the garage where I turned it over to the mechanic.  No one batted an eye.

That summer, I came to love and respect everyone at the station: the owner, mechanics, attendants, and the other lot boy Eddie.  They taught me to be prompt, conscientious, and hard working. In return, I received a worker’s paycheck at the end of each week. Sure, it was only a few dollars, but added to the tips I got from customers like the doctor, I was able to open my first bank account to buy little luxuries for myself.

By the time I was 16, I was able to parlay that experience into a better paying gig at another gas station as the swing shift manager.  I would be able to start after school, work until closing, then account for all the gas sold, cigarettes and oil cans in stock, and lock up for the night.  My regulars knew they just had to put up a number of fingers as they wheeled in for their gas. That would let me know how many packs of their preferred cigarettes to bring with me – to save me a trip.  A closed fist meant they wanted a carton.  I knew what they all smoked.

All this ran through my mind as I looked over at the modern station I used almost weekly.  Sure, there was an attendant, but I realized I had never even interacted with them let alone knew their name.  In fact, I could barely see their outline through the bullet-proof glass booth that reflected the sunlight. They wore a safety vest for the few times they left the confines of the booth and I don’t recall even registering their sex, height, or hair color.  They were just an anonymous shadowy figure that had no bearing on my purchase.

My eyes wandered next to the music studio.  I was very involved in music in my early school years, but my mom didn’t have to take me to a shopping center.  It was all part of my school.  I started with the oboe in fifth grade.  By high school, I had learned to also play the clarinet, saxophone, bass violin, and guitar.  My band teacher was Mr Lou DiIulio who was also a member of our Catholic parish.  He was a WW II veteran like most of the parish men I knew, including my father.  He ultimately taught at my high school for 33 years and raised three children on his teacher’s salary.  He taught me in concert band, marching band, orchestra, and ensemble.  I was his drum major for the 1973 high school football season.

Another WW II veteran was my father’s barber.  This neighbor came back from the war and bought an ugly 19th century two-story brick building a couple blocks away from our house.  He opened his barber shop on the ground floor and lived upstairs.  My brother and I would often go there on a Saturday with my father so he could get his weekly flattop. We would sit and fidget while dad and the barber talked companionably about mundane issues such as the weather and baseball scores.  As a savvy observer, I knew the exact drawer in the cabinet where the barber kept the Playboy magazines for his adult customers.  They were kept out of sight in deference to kids like me.  I still can smell the combination of cigar smoke, King Talc, and bay rum like it was yesterday.

I then looked at our local Great Clips.  They have ten stations inside, but the most stylists I have seen working here are three.  There is another Great Clips in the other strip mall a mile farther down the road.  I have been getting my hair cut here for a decade and don’t think I have had the same stylist more than twice.  They only greet me by name because I give them my number and they look up my name and how I had my hair cut last time.  Of course there is no longer smoking, and instead of  a cabinet of Life Magazines and hidden Playboys, customers wait on a hard plastic chair staring idly into their phones.

The adjacent ice cream shop is also intriguing.  My wife and I went in there once when they first opened about three years ago.  We each got a small kids’ one-scoop cone and looked at each other when the clerk said that would be $11.67.  We haven’t been back.

Down the street from the gas station where I worked at 14 was our local ice cream shop – Whitey’s.  Everyone knew Whitey and his family.  They went to our church.  Whitey had a garish, barn-sized building painted white with bright red stripes. All the cups and paper products were also decorated the same way.  Whitey hired parish kids to work at his shop around their school schedules.  All my cousins worked there at one time or another because it was near their house and he liked my uncle. My buddies and I would drive into his parking lot and sit on our car hoods slurping a malt or a sundae and wait to wave at the girls from school who drove through with their friends.  I realize this must sound like I’m reading the script of American Graffiti, but this truly was my life as an adolescent.

As I finally emerged from the car and headed into the grocery store, I had more pangs of memory.  As kid, my mom would send me the two blocks to Deppy’s Grocery for sweetened condensed milk and a pack of Salems for my dad.  Deppy’s was more along the lines of a bodega, as the hip kids call them now.  It was a small corner store on the ground floor of a three story apartment building. My mom didn’t send me with money; she didn’t have to.  I told Mr Deppy what she wanted and he would pencil the prices in a fat notebook he kept on the counter.  When my father’s union was on strike, I noticed Mr Deppy ‘s list of open accounts got long, but my dad always reconciled his bill as soon as he was back to work. Everyone in the neighborhood had entries in that notebook.

I went into the sterile, warehouse-sized chain store to get my groceries and decided on a checkout lane with a clerk I knew would be gone within a couple weeks.  We exchanged passing pleasantries but little more.  I rolled the shopping trolley back to my car, thinking of all that had changed while I wasn’t paying attention.

The shops and services in my modern strip mall are only hollow echoes of the town where I grew up.  Instead of friendly, long-term connections with clerks, barbers, teachers, and gas station attendants, I now have either a superficial or non-existent relationship with a faceless, nameless human inside a dark, bullet-proof box or behind a plastic screen.  These days, when I try to make a joke or funny remark to the store clerk, my humor is masked by – well, a mask.

I decided to stop at that gas station on the way home to fill up the tank.  I punched in a phone number on the pump to get the store discount.  They keep track of how much I spend, what I buy, and when I get gas.  But they have no idea who I am.  As these thoughts run through my head, I hear the speaker above the gas pump crackle to life.  “Hello, Pump Number Three.  I’m Earl and it’s my first day here!”