Back in 1980, a little movie called “Friday the 13th” came out. This movie was categorized as “slasher”. Graphic violence, sex, and a little more graphic violence. Murder, murder, and more murder. The movie was condemned by a *LOT* of people. Not just Christian hand-wringing groups either. Gene Siskel, famously, called the movie “truly awful” and, in his review, spoiled the movie. “The real killer is Jason’s mom.” He came out and said who the real killer was! Then he described the murders in as much detail as was appropriate for a newspaper! And *THEN* he gave out the address of Gulf and Western Industries, Paramount’s owner, and the name of the CEO that you could write a letter to. He gave the home city of the lead *ACTRESS* in the film, saying that a letter sent to general delivery in this small town was likely to make it to her house. 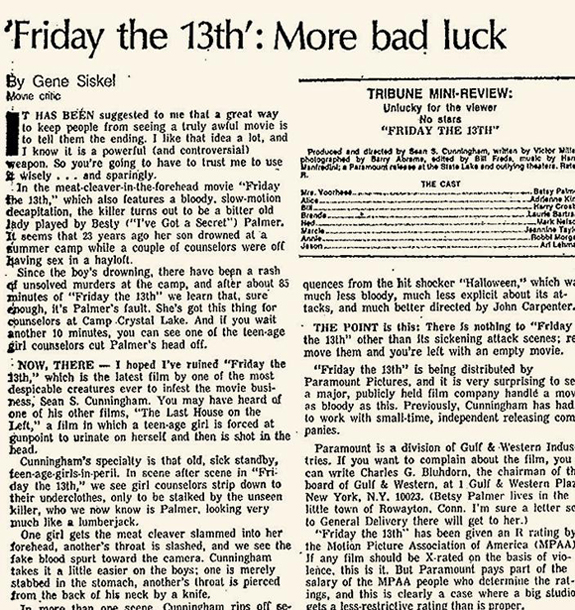 This movie was so very awful that he felt it appropriate to use every tool in his toolkit to get you, the consumer, to not see the movie and to get you, the consumer, to write a letter to the company that made it and to the actress who played the killer to reconsider ever playing in a movie like this again (and, presumably, as a warning to other aspirants who might consider playing a role in a truly awful movie).

When things are that bad, serious critics will do what they can to make the world a better place.

Cyberpunk 2077 is coming out on Thursday, the day after tomorrow, and there is already a great deal of controversy surrounding the game.

One of the controversies involves the representation of Transpeople in a Cyberpunk future. (A representative essay explaining the problems can be found here.) Anita Sarkeesian points out that Rock Paper Shotgun devotes the first seven paragraphs of its review to discussions about Trans representation:

Even just a few years ago we would never have had a mainstream review of a mainstream AAA game that dedicates the opening SEVEN paragraphs to the game’s success or failure at trans representation. That’s not nothing. https://t.co/O8DRUBxptV

Comic Book Resources has an essay dedicated to the question of whether the game is an act of violence against Transpeople:

How #Cyberpunk2077 Perpetuates Transphobia & Why Gamers Are Calling It an Act of Violence https://t.co/rabRyjWN3g pic.twitter.com/aAXpXTRcKs

Those of you who might be unfamiliar with traditional gaming review scores can be brought up to speed with this scene from the pilot of The Critic:

BUT! Let me point out that those numbers don’t tell me anything either. Cyberpunk is buying a *LOT* of ads out there. Additionally, I remember Mass Effect 3 and how disappointed I was by it. One of Mass Effect 3’s ad campaigns was that it had received so very many perfect scores: 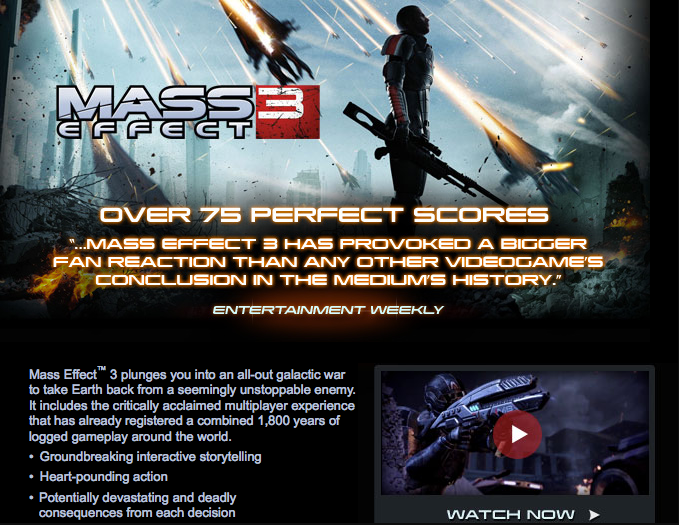 So I look at IGN, Game Informer, and Games Radar and I see that those numbers are meaningless as well.

All that to say, when I look at the various reviews out there and the various scores being given and the various blurbs being highlighted… I realize that I don’t know anything about the game. Is it a good game? Does it deserve high scores? Is it a bad game, does it deserve bad scores (and game websites are stuck with the age-old tactic of damning with faint praise, given advertiser dollars)? Is it a game that bad people might really enjoy, if they’re bad, but good people know, like Gene Siskel, that they have to do everything they can to prevent the median consumer from playing the game and giving the game the worst score they can give (given ad constraints) is the only tool in their toolkit?

I have no idea.

It’s downloaded, though. I’m ready to play it on Thursday. And find out.

(Please use this thread to discuss the various political and religious issues surrounding Cyberpunk and let’s try to keep such discussions out of the “fun” ones on Saturday.)

(Featured image is “Cyberpunk Baby” by Jeremy Brooks and is licensed under CC BY-NC 2.0)