Holiday Memories and A ( Not So) Brave New World 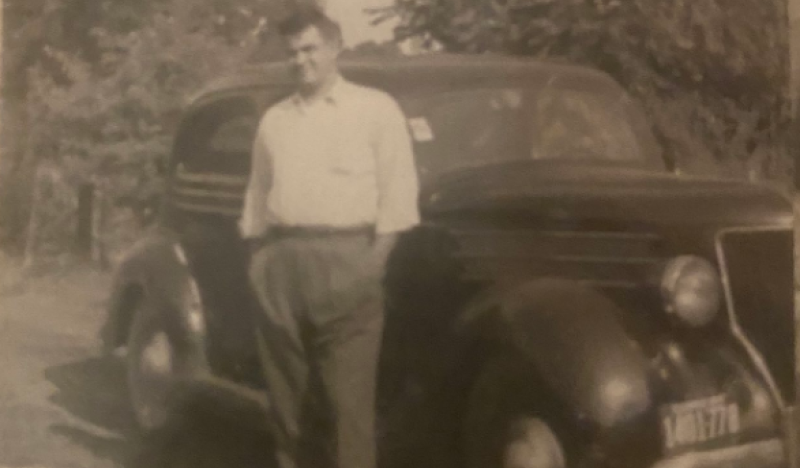 Virgil McCumber, the authors father, in an undated post-WW2 photo.

“If you were born mid-century, you will one day wake up in a century not meant for you.” I cannot find the original reference to credit the source for this provocative maxim, but it has been a recurring theme for me during the After Times of the pandemic. The truth of this precept hits home as we approach the holidays, and like many of you, my mind harkens back to memories of holidays past.

I vividly recall the holiday gatherings when I was a boy in the mid-1960s. My cousins lived two blocks away, and we bundled up to walk through the snow to their home for Christmas gatherings. My uncle was a VIP layman in our Catholic parish, and out of respect for his influence, our parish priests walked en masse, black robes flowing in the cold winds, from the parish rectory to my uncle’s spacious Victorian home to enjoy smoking cigarettes and swilling holiday cocktails with our family members. My blue-collar father by this time had ceased his post-war drinking binges and quietly settled for black coffee and a chain of cigarettes as we sat among the many guests.

It was at one of these holiday fests when at the tender age of 15, I first felt the effects of alcohol. As liquor was no longer in our home in deference to my father, I only encountered booze at my uncle’s house. As an older child, I was expected to function as support staff for my harried aunt. At this particular event, I was tasked with clearing away the tables set up for Happy Hour while dinner service was prepared in the kitchen. While removing the used glassware, I decided I would sample some of the leftover drinks on offer.

One of the local holiday favorites was a drink known as a Tom & Jerry: named not for the cartoon characters, but an 1821 British play. You can look it up. It was also a favorite Christmas tipple of President Warren G. Harding. Tom & Jerry’s were drinks made with a type of eggnog batter the family purchased from a local donut shop. It was a cold-weather drink, served hot in a coffee mug and was laced with both brandy and rum. So, a teenager with no previous exposure to the wonders of alcohol found himself sampling half-consumed, lukewarm drinks made with eggs and dairy and two types of sweet liquors. I know I am telegraphing where this is going. Fortunately for me, I noticed the one cup in which the monsignor snuffed out his cigarette in his half-consumed drink before it went to my lips.

As I felt the oncoming effects of the two types of booze, I was also feeling the associated stomach rumblings of lukewarm milk and uncooked eggs swirling around a bellyful of holiday cookies and peanut bars. A rushed trip to the bathroom eventually started to settle my stomach, but the strange new feelings in my head lingered most of the rest of the evening. I worked to hide the symptoms from my parents as we walked back home, the cold wind bracing my constitution while allowing me to bury my face in my hood.

My father passed away just a few years after. I often think of him — especially this time of year – as he and I never really connected as two adults. When his life was cut short by a quick and horrific battle with colon and lung cancer, I was still a rebellious and headstrong young man trying to find his own way in the world. He was never one for reminiscing, so only years later did I spend time trying to find clues to his life before me. I found he had woken in a time not meant for him. 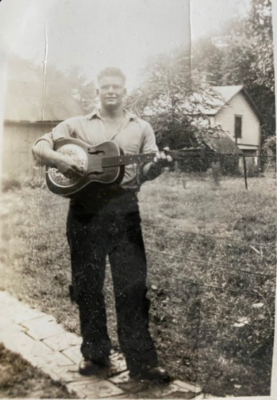 Virgil McCumber in an undated photo prior to 1939 in Iowa.

My father came of age on an impoverished Dust Bowl farm in Iowa. As the farm struggled to feed even his own family, my father left during the Depression to earn money as an unskilled young man working in FDR’s Civilian Conservation Corps. He was sent to Wisconsin to hack out trails in state parks with hand tools and mule wagons. As that dead-end job dried up, he enlisted in the US Navy in 1939, two years before we would go to war. During basic training at Great Lakes Naval Station, his mechanical aptitude directed him to training as an aviation metal smith. After Pearl Harbor, he was sent to sea aboard the USS Wasp (CV-7) to repair Navy aircraft with a backup role as a ship’s fireman.

The Wasp was sunk out from under him and his shipmates in the Pacific in 1942 by a Japanese torpedo. After trying unsuccessfully to fight the flames erupting all over the ship, he eventually raced to the stern to throw ammunition boxes overboard to delay the fatal explosions to come. As the carrier foundered, he was forced to abandon ship and ended up floating in shark-infested waters waiting on a rescue that was still many hours away. I only know all this from a yellowed copy of our local paper I found long after his death where he was interviewed from his hospital bed in Memphis. He never spoke of any of this to anyone I know — least of all me. 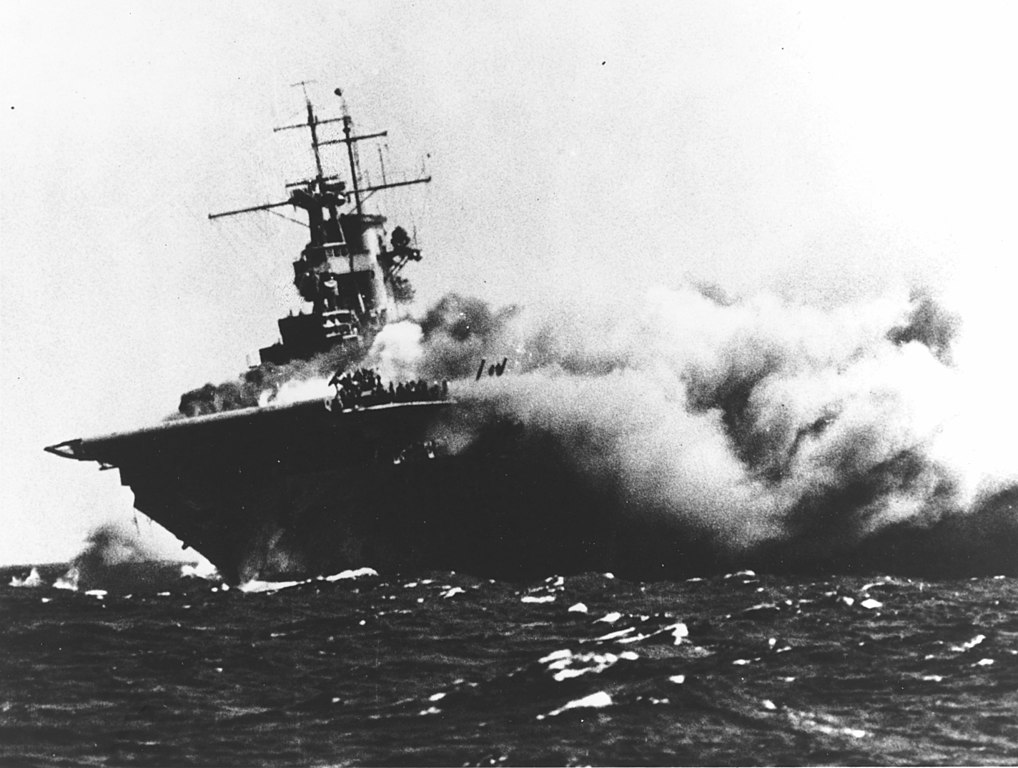 The U.S. Navy aircraft carrier USS Wasp (CV-7) burning and listing after she was torpedoed by the Japanese submarine I-19, on 15 September 1942, while operating in the Southwestern Pacific in support of forces on Guadalcanal. US Navy Photo [Public Domain]

After his second Pacific Theatre tour in the Philippines, he came home at war’s end to marry my mother. Thereafter, he diligently went each day to a John Deere factory where he worked as a machinist for a paycheck to provide for his wife and five children. He built corn planters and was even awarded a patent for one of his mechanical inventions that dramatically improved the efficiency of corn farmers everywhere. I loved the man and admired him, but we were never close. He always seemed distracted and aloof, like he was communing with ghosts and suppressed memories. 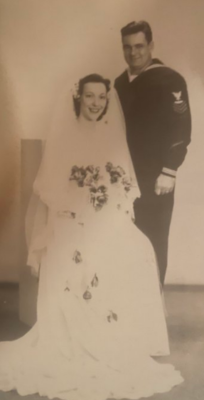 Wedding Photo of the McCumbers, the authors parents, 1945

My father died suddenly in 1977, and the world he learned to succeed in had been washed away. He was a product of deprivation and the Second Industrial Revolution. He was gifted with hands that could not only repair any kind of aircraft or farm equipment, but make beautiful Bauhaus-style furniture and cabinets. I often wonder how he felt when he turned on the television to see the 1968 Chicago riots, San Francisco hippies, Woodstock, and the psychedelic Bob Dylan and Jimi Hendrix posters my sister hung in her area of the home. It was nothing he would have foresaw as a young farm worker.

Holiday memories force me to face my own mortality and reflect on my perspective of coming of age in a previous century. I know the tools I adopted for success are no longer as relevant in this new era. When I teach and interact with my younger students, I am often asked how I got into my career field and some are even foolish enough to ask for advice. I always struggle to answer knowing they are growing up in this new century. I know my father was scared for me. His first-born son didn’t share his mechanical aptitude nor was he able to craft functional items with his hands. He was destined to seek his own way in a new world my father couldn’t comprehend.

All this washes over me as I look into a hopeful young person’s face.

This is no longer my century.