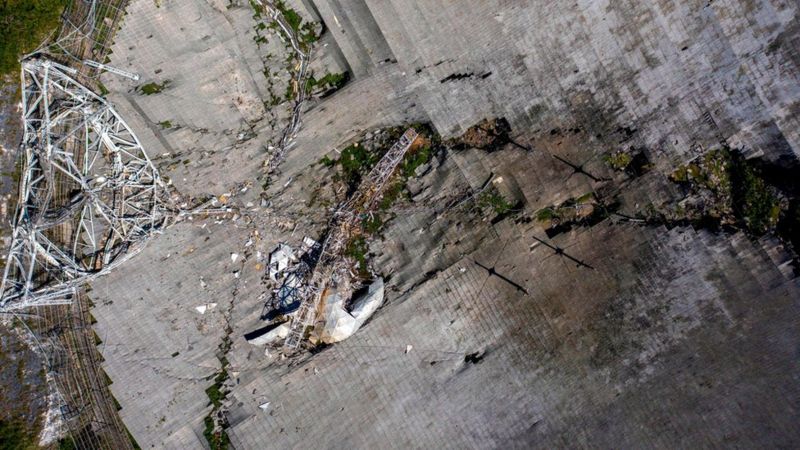 The destroyed dish at Arecibo.

[ThTh1] On our last episode, I mentioned the damage that had been done to the Arecibo radio telescope in Puerto Rico and the NSF’s decision to decommission it. Earlier this week, however, the telescope collapsed. Or, more accurately, the beam-steering mechanism above the dish where delicate radio instruments picked up and recorded the radio signals focused there, fell onto the main dish, wrecking both. If you’ve ever seen Goldeneye, it’s like the end of that movie, only without the explosions and Sean Bean.1

Our friend Dennis will soon have a piece up about what the telescope meant to the people and the island of Puerto Rico. All I can comment upon is what it meant to the scientific community. 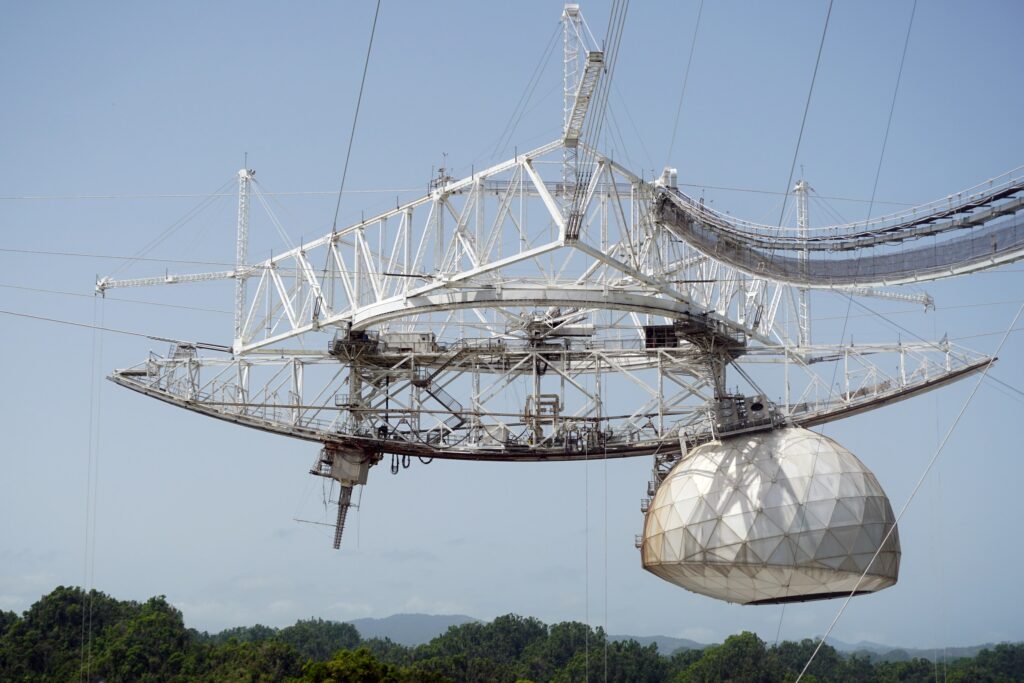 The above picture shows the iconic beam-steering mechanism that was suspended above the dish. Pictured are the broken 96-foot 430 MHz antenna (damaged by Hurricane Maria) and the massive Gregorian feed sub-reflector. When I visited in 1993, the Gregorian feed was not there. It was all long antennas dipping down, which ran along that track on buildings the size of trailers. We took the cable car up to the mechanism and jumped down onto them to go inside. For someone with acrophobia … it was an experience.

Arecibo is not a typical radio telescope. Most telescopes are parabolic in shape and focus light to a single point. You can then steer the dish toward whatever you want to study. Arecibo was a spherical reflector that focused the light onto lines that the antennae were then moved to cover. This allowed the observatory to cover large swathes of the sky while leaving the massive 1000-foot dish fixed firmly on the ground.

The dish itself, as you know if you’ve seen the movies it’s featured in, is like a colander — metallic and with lots of holes to allow rain to get through. These holes are smaller than radio waves (which range from centimeters to meters in size). So, they don’t affect the light collected by the telescope at all. This is sort of like the way your microwave has a cover for the window with little holes in it that allow tiny visible light waves through while the large microwaves are blocked. This allow you to see your burrito being cooked without you being cooked yourself.

Instead of cooking burritos, however, Arecibo studied the cosmos. Operating for over half a century, it studied everything from hydrogen gas in our galaxy to the gigantic black holes in the cores of distant galaxies. My own work was on pulsars, measuring the changes in their rates of spin. Arecibo was particularly good at pulsars, having discovered the binary pulsar PSR B1913+16 (work which won a Nobel Prize), the pulsar at the heart of the Crab Nebula, the first millisecond pulsar (one spinning 642 times a second) and the first planets beyond our solar system surrounding PSR B1257+12. The latter discovery was completely unexpected because we thought that the supernova explosions that create pulsars would destroy any planets. It was also involved in SETI’s search for extraterrestrial intelligence and sent the Arecibo Message to the globular cluster M13.

The Arecibo message (turned on its side), a radio message sent out into space to announce humanity’s presence.

But the legacy of Arecibo was not in its most spectacular discoveries. It was in the day-to-day. For 57 years, this was a workhorse of astrophysics, observing day and night, year after year, making the slow steady contributions by which we come to glimpse the vast engines that grind the cosmos. There is no way to measure its impact. Just a search of the archive for abstracts with “Arecibo” in the title returned nearly 2000 refereed papers. I suspect the actual number of papers published using data from the observatory is many times that. And the number of studies on other telescope inspired by or informed by Arecibo data is even greater than that.

I consider myself part of Arecibo’s legacy2. I mentioned last time my only visit to the observatory and how it set me on my present career course which has seen me go from radio to optical to ultraviolet, from a 1000-foot telescope in Puerto Rico to a 12-inch telescope in space and drop about 100 scientific research papers along the way. And I have had my own students and collaborators I have helped along their paths. All of that got its start with me sitting in a control room in the middle of the night, watching that behemoth move around and thinking, “You know … this wouldn’t be a bad way to make a living.”

Right now, no one knows what will happen next. It is unlikely that the telescope will be rebuilt from its current state. It could be completely demolished and another one put in its place, though. The staff will still be there (they should be OK for a while since telescope itself is part of a larger observatory which houses a number of instruments). The site is still ideal. And there is precedent for replacement. 32 years ago, the 300-foot Green Bank telescope collapsed after wrapping itself around the support structure. Three years later, construction began on what would become the Robert Byrd Telescope, an even better instrument.

Left: the shattered remains of the Green Bank Telescope. Right: the replacement that rose from the ashes.

Regardless of what happens from this point, nothing can take away Arecibo’s legacy of scientific discoveries, illumination of the deeper mysteries and the careers it started and sustained. Ad Astra, you magnificent monster of a telescope. You will be dearly missed.

[ThTh2] One of the videos that every early physics student watches is the collapse of the Tacoma Narrows bridge. A version can be seen below:

The first version of the bridge was opened in July 1940 and immediately had problems with the wind causing it to oscillate. These motions were alarming but not necessarily dangerous as the bridge was built to withstand such stresses. On November 7 of that year, however, “Galloping Gertie” began to exhibit much more dangerous twisting motions and eventually collapsed. The only casualty was a dog who refused to leave a car stranded in the midst of the bridge. (You can watch a video here that gets into the physics and engineering issues).

Yesterday, this footage circulated of the Verrazzano Bridge in 60 mph winds.

If you were wondering why the Verrazzano Bridge was closed on Monday pic.twitter.com/W8AoCEUZkA

What you’re seeing is good engineering. Any suspension bridge is going to respond to high winds. The Verrazzano Bridge is handling them just fine, moving up and down in response to the vibrations instead of resisting and taking damage from them. You wouldn’t want to ride on the bridge right now (indeed, it was closed). But there is unlikely to be any structural damage. And, more importantly, the design of the bridge prevents these high winds from creating the kind of twisting motion that destroyed Tacoma Narrows.

[ThTh3] Release the Kraken! No, not that one. The one on Titan.

[ThTh4] When our first astronauts went into space, they reported the existence of “fireflies” fluttering around the spacecraft. For a while, we had no idea what these were. There was even speculation that the Mercury astronauts had discovered a new form of life in space. Eventually, however, we figured out that it was condensation from the spacecraft’s cooling system. It has sometimes been claimed that this was astronaut urine, but Mercury didn’t have a system for urine dumps. But … what’s old is new.

Video of the descent and landing of the Chang'e-5 spacecraft, which touched down in the basaltic plains of Oceanus Procellarum on the lunar nearside yesterday.

Look at that landscape! It's craters all the way down!! 😍 pic.twitter.com/qiW9vNzKXE

[ThTh6] A huge amount of ancient art was just discovered.

[ThTh8] One of the remaining frontiers in astronomy is the origin of cosmic background light. Whenever we look at an object like a galaxy, there’s a certain amount of diffuse “sky” radiation – background light against which the galaxy or whatever is contrasted. That background mostly comes from dust in our Solar System or the Galaxy itself. But the New Horizons probe, now well past the orbit of Pluto, is able to ignore most of that light. And it appears the background glow is more prominent and less explainable than we thought. There are variety of explanations for it, including some more exotic explanations of Dark Matter, the invisible material that comprises about 85% of the mass in the Universe. Look forward to a lot more work on this subject, which has lain dormant for far too long.

[ThTh10] If you look at the western sky in the late evening, you will see two bright points close to each other. These are the planets Jupiter and Saturn, relatively close to each other. In late December, they will be the most closely aligned in almost a millennium. A particularly good time would be around December 16, when you’ll have the new crescent moon in the same part of the sky. They were close in November and the view was spectacular.

Update Some footage of the collapse:

There was a drone inspecting the Tower 4 Cables when the collapse started so we get a close up on the cables breaking, check the second video segment. pic.twitter.com/Qw37Z5byWg