Disney’s Enchanted: A Contrast Between Real Love and Fairytale Love 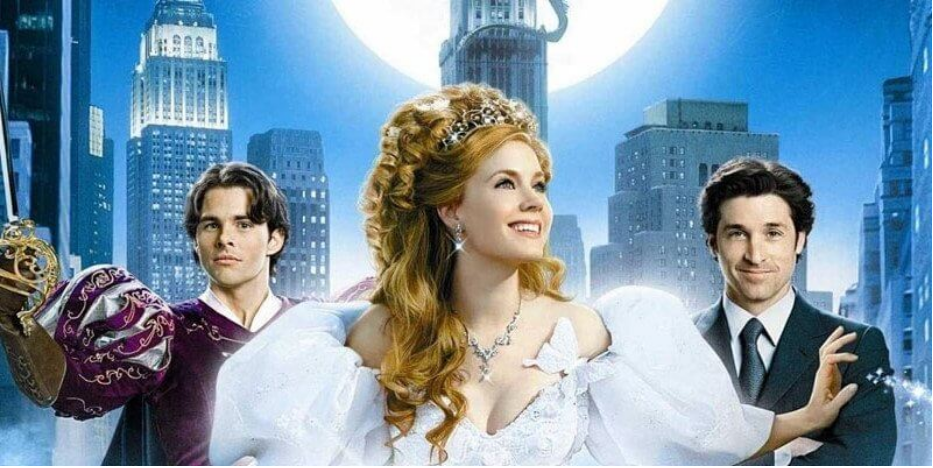 Promotional image for Enchanted. Image and characters are property of Walt Disney Company.

Walt Disney’s film “Enchanted” is a very creative and, at times, satirical take on the traditional fairy tale.

The most fascinating part about this film and the Lacanian view of the phallus (the idea that the phallus isn’t a penis, but the object of someone’s desire) is to see the contrast between the animated world and live-action of New York City. The film begins with all of the traditional Disney bells and whistles: a storybook on a pedestal with a narrator, the phenomenal Julie Andrews, beginning the story of Giselle. We are introduced to the land of Andalasia and the evil Queen Narissa and her obsession with keeping her stepson, Prince Edward, from finding a wife. This is when we meet Giselle, played by Amy Adams, who lives alone and wants to find her dream prince. After being rescued from a troll by Prince Edward, they decide to get married in order to share true love’s kiss. On the day of their wedding, Queen Narissa transforms herself into an ugly hag and pushes Giselle into a well that sends her to the “real” world of New York City.

The film brings up the question of fairytale romance and how it is either possible or impossible in reality. In order to answer this question, we are provided with a stereotypical princess-hopeful that undergoes a metamorphosis into a mixture of traditional femininity and modern-day feminism. She is not the only one to undergo a fundamental change; all of the characters in the film join her on her journey to becoming modern. The only character that seems to take a step back is Nancy Tremaine, who wants the ideal fairytale love shows despite the fact that she has achieved the male ideal of success; she wants to be the object of a man’s desire.

The ideal of fairytale love versus real life love is a binary that is presented to all men and women who grew up with fairytales. Andalasia is the location where fairytale love can exist and is where the story begins. Andalasia is the representation of the Imaginary Order. According to Lacan, the Imaginary Order is that part of our brain that houses our dreams, fantasies, and deepest desires of our hearts. In Andalasia, or Andalusia as Robert’s assistant Sam likes to call it, we have Giselle who is sitting around waiting, like all good princesses do, for her handsome prince to come along to her cottage in the woods and ride off with her into the sunset on his trusty steed. This is in fact what happens. Prince Edward hears her singing and leaves the troll he captured to propose to Giselle and marry her in the morning. The only characters with personal agency in Andalasia are Edward and Queen Narissa. Giselle has no need for personal agency, as Prince Edward is to rescue her and provide her with all of her needs and desires. Unlike the reality of New York City, the little animals that she spends her time with are cute, fuzzy and they can speak to her.

Once Giselle is transported to a place that has no happily ever afters, she struggles to find her Edward to rescue her from an unfriendly place where she is robbed and not shown any kindness. New York City is the symbolic order, which represents laws and norms in society. The only kindness she receives is from Robert when he finds her on a castle billboard trying to gain entry. He only treats her with kindness because he thinks that Giselle is crazy. When Edward comes to rescue Giselle, he sees New York as a place where things are difficult, and the strange modern surroundings do not distract him from his goal of finding his one true love. Edward even tries to equate items in New York to things back in Andalasia, such as the television in the hotel. He refers to it as a magic mirror.

The contrast between real love and fairytale love is something we access through what we thought love was during our childhood, when the Imaginary Order was in charge. Giselle and Robert grapple throughout the film. In Andalasia, Giselle and Edward fall in love instantly with no dating, no questions, and no hesitations. However, in New York City, Robert is a single father who has been dating Nancy for five years and does not want to get married on “a crazy, romantic whim”. Being a divorce lawyer, he sees how fairytale love and reality crash through the passage of time. To Giselle, love is forever and will always be happy. When Giselle finds out that love does not always work out in reality, she is crushed and begins to cry. She truly believes that love solves everything.

Many girls grow up listening to and now watching traditional fairy tales that have a princess who does not have agency. The traditional princesses are essentially trophy wives that wait around to be rescued by their Prince Charming. Over the past thirty years, the genre of fairytales has changed as the stories are retold with a more feminist viewpoint. As Walt Disney began to put the fairytales on the silver screen with Snow White, the princesses Snow White, Cinderella, and Aurora typify the stereotypical princess. They are kind and beautiful and must wait for the Prince to save them. However, after the Feminist movement, the Disney Princess genre changed to allow the princess to have agency and to have a say in what happens during her life. The new princess still waits for the prince but is not completely helpless.

Psychoanalysis and feminist theory cross paths when discussing literature. Lacan believed that the phallus was not the male penis or the female clitoris. He believed that the phallus is the idea of desire. He also theorized that there are three parts to the human psyche: the Imaginary Order, the Symbolic Order, and the Real Order. The shift from the Imaginary Order to the Symbolic Order takes place in the mind of the heroine of “Enchanted,” Giselle.

Traditionally we follow one character in a story and come to some sort of awakening about an aspect of life. In “Enchanted,” there are several characters that grow and change until they end up at their own personal happily ever after. They find this either by moving from the Imaginary Order to the Symbolic Order or visa versa. The male protagonist, Robert, learns that it is ok to be vulnerable to love even after you have been hurt. His ex-girlfriend Nancy realizes her lifelong dream of fairytale love despite being a strong and independent New York woman, thus going to the Imaginary Order. The female protagonist Giselle undergoes the biggest change of all. She goes from being a helpless woman that needs a man to rescue her to being an independent woman that has control over her own destiny in the Symbolic Order.

The actual point of the new princess, like Giselle, is to help us understand that even though we are evolving women that are not necessarily dependent on men anymore, deep down everyone has the need to be desired, to be the phallus. Becoming the phallus is having the power. Even though a person wants to look at the world through the rose-colored glasses of a fairytale existence, like Giselle, it may not necessarily be denial of reality. In fact, it may just be a positive attitude that can help propel them to have all that they desire. The fairytale romance is one that most women and some men hope to attain, “For Lacan, literature’s particular ability to capture jouissance, or a brief moment of joy or terror or desire that somehow arises from deep within our unconscious psyche and reminds us of a time of perfect wholeness when we were incapable of differentiating from images from the Real Order”. 1 Nancy really hits this idea home. Although she has everything that a woman should strive for in today’s world, she really wants to be desired and be whisked away to live happily ever after.

What is great about the film “Enchanted” is that it shows what happens during the after in the real world. In Andalasia, it ends where all fairy tales end, the wedding. However, in the real world, we see Giselle, and Robert and the life that they are building after Giselle and Robert get together. After all, that is the part that no one talks about, the actual happily ever after. Many young women getting ready to be married say that they want to look like a princess on their wedding day. There is such a buildup to getting engaged and then to the wedding, that no one talks about what happens after. It can be hard, but true love, real romantic love endures and overcomes the inevitable obstacles that life throws out. It is the love and respect that people have for each other that keeps the marriage going during difficult times. That idea is not anti-feminist; that is where the idea of respect comes in. Mutual respect, not the woman being merely a passive participant in the marriage is my view of the feminist ideal. “Enchanted” does this; Robert wants Giselle to be her own person, but also wants her to love him for who he is. Giselle and Robert live happily ever after. For some, the happily ever after is the best part.

Eloisa Hilton is an erotica writer from Huntsville, Alabama. She is the author of Treasure Lost, available on Amazon. Her short works can be found on her blog.