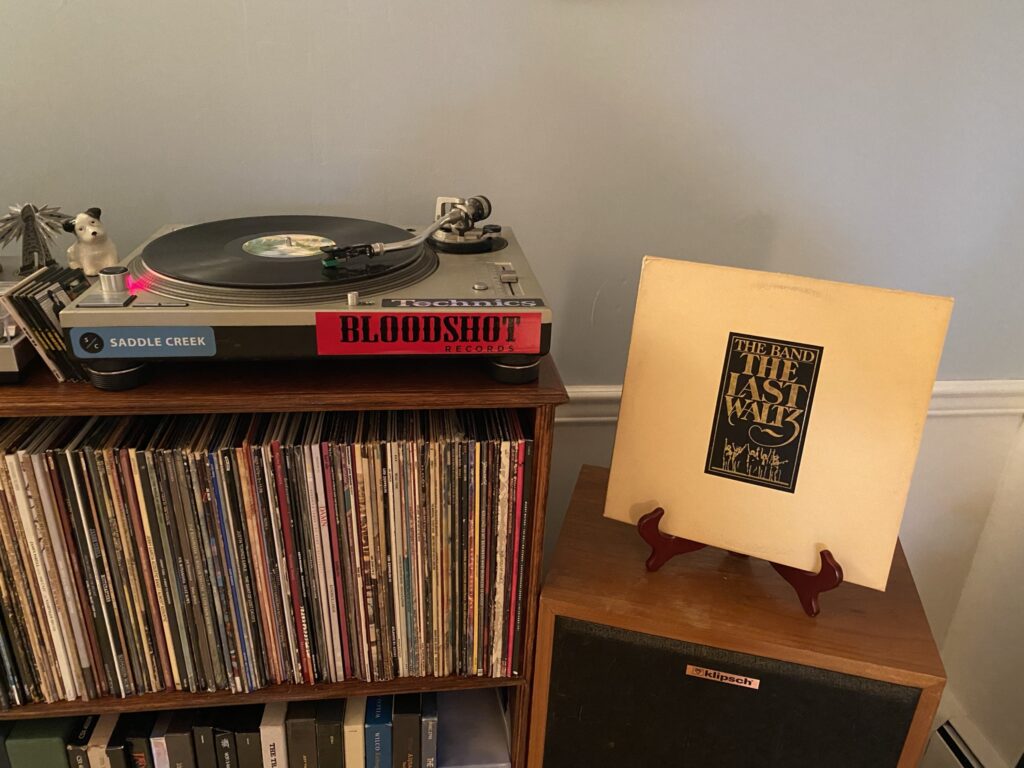 Picture yourself in a crowded concert venue in San Francisco 44 years ago today. There are long tables with plenty of seating, stuffed to the gills with Thanksgiving dinner dishes. Thousands of strangers are milling about smoking, drinking, etc. Poets are reading poetry. Artists are…arting. All in preparation for the world’s greatest vanity project.

Now don’t get me wrong, I love The Band, but if you’ve ever seen Scorsese’s documentary of this album/concert, then it is abundantly clear that only Robbie Robertson wanted this kind of sendoff.

In an effort to cover a holiday-themed album from my collection, I decided to pull this one for this year. Last year I was pressed for time, so I did a very rough spin post on an anti-war Thanksgiving classic. This year I thought I’d opt for a more neutral and celebratory spin. Who can resist great music and legendary musical guests?! 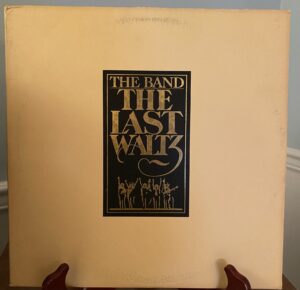 I am going to depart from my typical track by track review and instead focus more on what tracks I enjoy from two out of three categories. The first being originals by The Band, the next being my favorite guest appearances1 from this concert, and finally I want to do a track by track of the so-called “Last Waltz Suite.” Please note that I am working with the vinyl track list, which doesn’t include several of the better performances featured on the documentary. 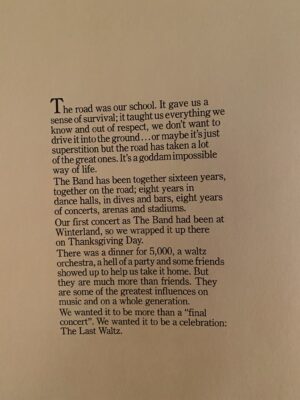 I feel blessed to have acquired a relatively clean copy of The Last Waltz on vinyl. There is a little ring wear on the outer sleeve, but the wax is in excellent shape and so is the accompanying booklet of photos. All printed on cheap as hell card stock paper though. If this ever gets a proper deluxe reissue on vinyl, I hope they choose better packaging. The construction paper-esque nature of the booklet just means that it will turn to dust at some point no matter what I do.

The album art is very minimalist, the front emblazoned with a relief of the iconic image from the film. As I noted, it comes with a booklet containing various photos and the statement you see to the left at the beginning.

No fancy colored wax here, but the 3 LP pressing is great and so is the recording of the bulk of the concert itself. This ain’t no bootleg. Usually I would note special personnel here, but I am going to discuss all of the guest appearances/performances very soon. Rhino did a reissue on compact disc in 2002 that had the original concert in total, the suite, and a few rehearsal tracks and jams.

Tracks by The Band

This concert featured The Band playing many of their bigger hits, mostly with the full band, but with some horns and/or strings accompanying. Of course, on Side1 there is the famous “Up on Cripple Creek” featuring Levon Helm shouting out “YEA YEA, YOU KNOW I SURE WISH I COULD YODEL-ODEL-” during the song’s outro. Another original on the first side is the “Stage Fright” with a classic performance on bass/vocals by Rick Danko.

Side two has the Danko on vocals track “It Makes No Difference.” The next song of note is on side three, “The Night They Drove Old Dixie Down.” A song about the waning days of the Civil War written mostly by a Canadian dude. He did, however, have some help from native Arkansasian, Levon Helm.2 The cover version by Johnny Cash is pretty close to being as good as the original, but it’s not better in my book. Side four features “The Shape I’m In” and my all-time favorite song by The Band, “Ophelia.” 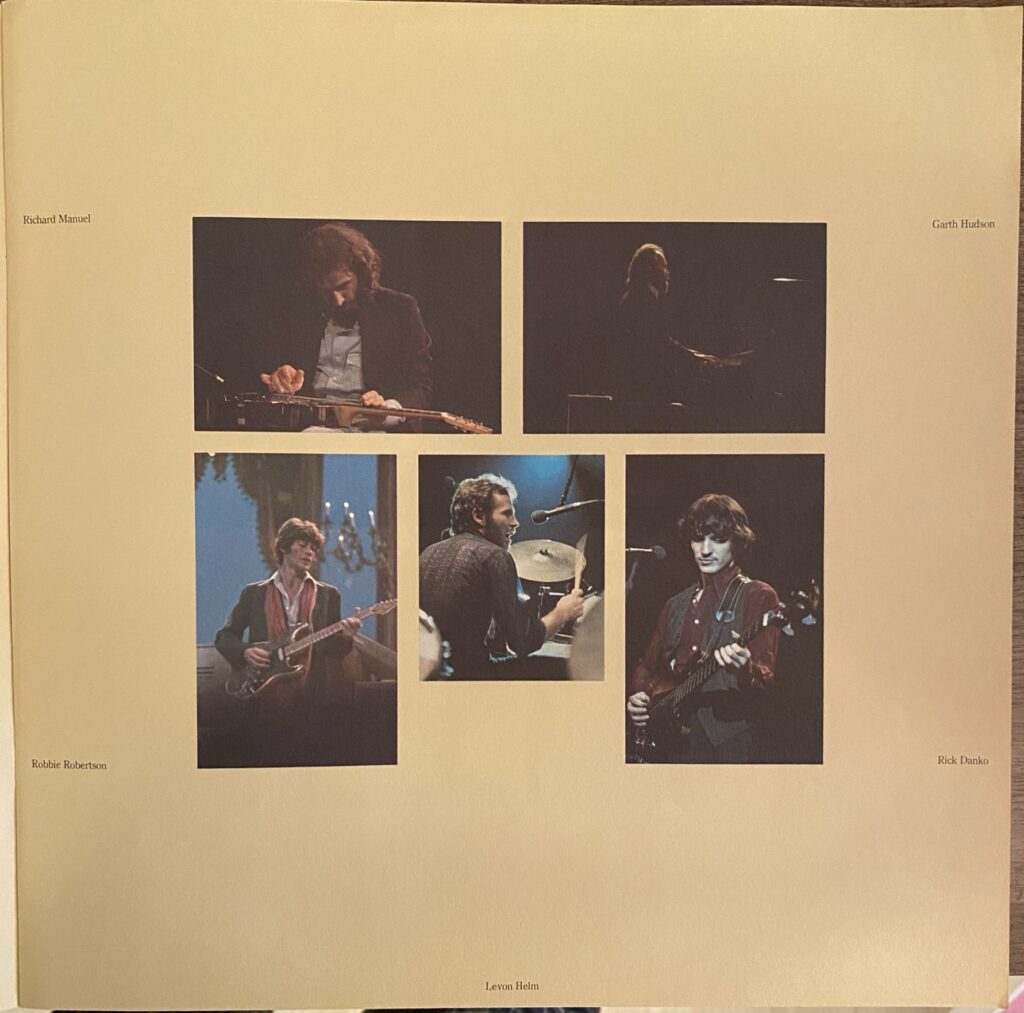 Finally, on side five there is “Life is a Carnival.” I wish I could have a good explanation as to why “This Wheels on Fire,” “Acadian Driftwood,” the “Genetic Method/Chest Fever” mashup, “Don’t Do It,” and The Band only version of “The Weight” didn’t make the vinyl cut here, but like I said, I am crossing my fingers for a deluxe reissue someday with the whole shebang on vinyl. If anyone knows Robbie Robertson, let him know that I’ll be first in line to buy that. All of those tracks and more can be heard on the 2020 Rhino compact disc reissue, or digitally.3

The Last Waltz eventually turned into a huge party with a ton of musical luminaries. All of which related to The Band in some why, except for the inclusion of Neil Diamond, but I’ll get to that later. The first appearance was by “The Hawk,” Ronnie Hawkins who gave these guys their start as the backing band, “The Hawks.” The rendition of “Who Do You Love” from The Last Waltz is full of manic energy, but it doesn’t burn the house down the way Van Morrison (Van the Man!) did with his performance of “Caravan.”

Before I get to Bob Dylan, it is worth mentioning great performances by Neil Young with his song “Helpless.” Joni Mitchell doing her hit, “Coyote,” “Such A Night” by Dr. John, and extremely great renditions of blues songs, “Further On Up the Road” (Clapton), “Mannish Boy” (Muddy Waters), and “Mystery Train” (w/Paul Butterfield). One of the more random performers was Neil Diamond. Now my late grandfather was a huge Neil Diamond fan, I don’t dislike him, but I have read numerous Dylan biographies that delve into their feud in great detail.4 One of the great anecdotes from this show was Neil Diamond performing “Dry Your Eyes” and then stepping off stage and sneering “Follow that” at Bob Dylan, to which he allegedly quipped, “What do I have to do, go on stage and fall asleep?” Classic Bob! 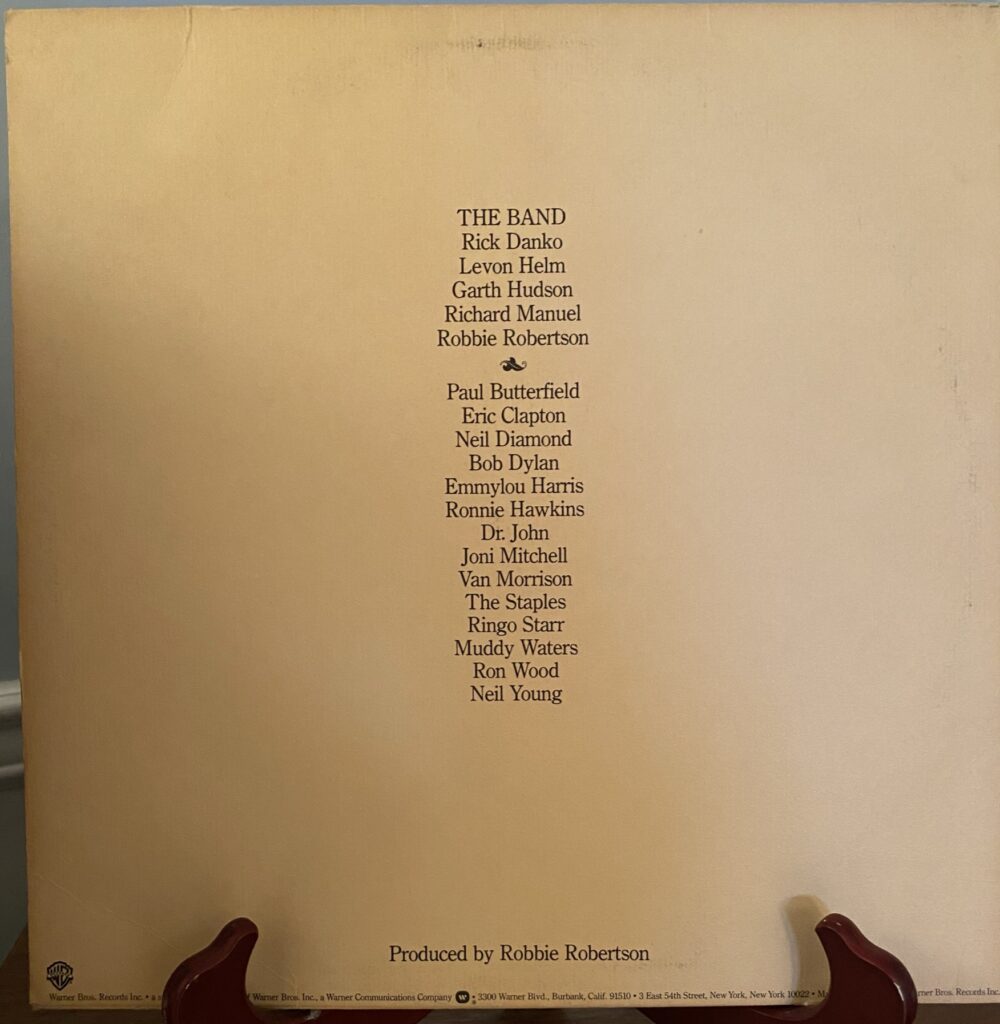 The Band performed 5 Dylan songs, the last of which “I Shall Be Released” was done with the full ensemble. Only 4 made it onto the vinyl release. The rocking rendition of “Baby Let Me Follow You Down” is still one of my favorites from this album. “Forever Young” and “I Don’t Believe You” were also performed. A real random inclusion was the song “Hazel” from the extremely underrated Planet Waves, which The Band played on in the studio. It did not make it onto the vinyl release.

Richard Manuel sang this song which is a soulful rock song that sounds great with the horn accompaniment. The song was written and performed just for this project.

I suppose this one could have counted in the above section, because it is performed with the always amazing Emmylou Harris, but again, it is a part of the suite, so it is included down here. It is such a great country/rock/americana track. Other vocalists include Danko and Helm. It was performed on a soundstage, not in front of the audience.

Written and performed by Robertson, it is not a very strong track in my opinion. Kind of a foretelling of Robertson’s later solo career. It has a distinct sound that is like The Band, but with a bit more of a weird melancholy dirge-like quality. Kind of meh.

Two versions of the Weight were done, one that was solely performed by The Band live to the audience. As mentioned above, it didn’t make the vinyl cut for some reason, and the other done on the sound stage with The Staple Singers. Just an absolute excellent performance by all the parties. I do love me some Mavis Staples, so I may be a bit biased, but listen for yourself.

The Band - The Last Waltz - The Weight feat. the staples singers

The penultimate suite track is performed by Manuel and Robertson. It is kind of sad to listen to knowing that these guys had such an incredible run in their original form before Robertson decided he was done. As you may know, The Band continued on well into the 90s despite the untimely deaths of Richard Manuel and Rick Danko.

6. Theme from the Last Waltz

An instrumental track that was played at the beginning of the vinyl version and at the end on side six. It’s a waltz, obviously, and is also recorded and performed on a soundstage. If you’ve seen the film, you have seen it played during the credits. 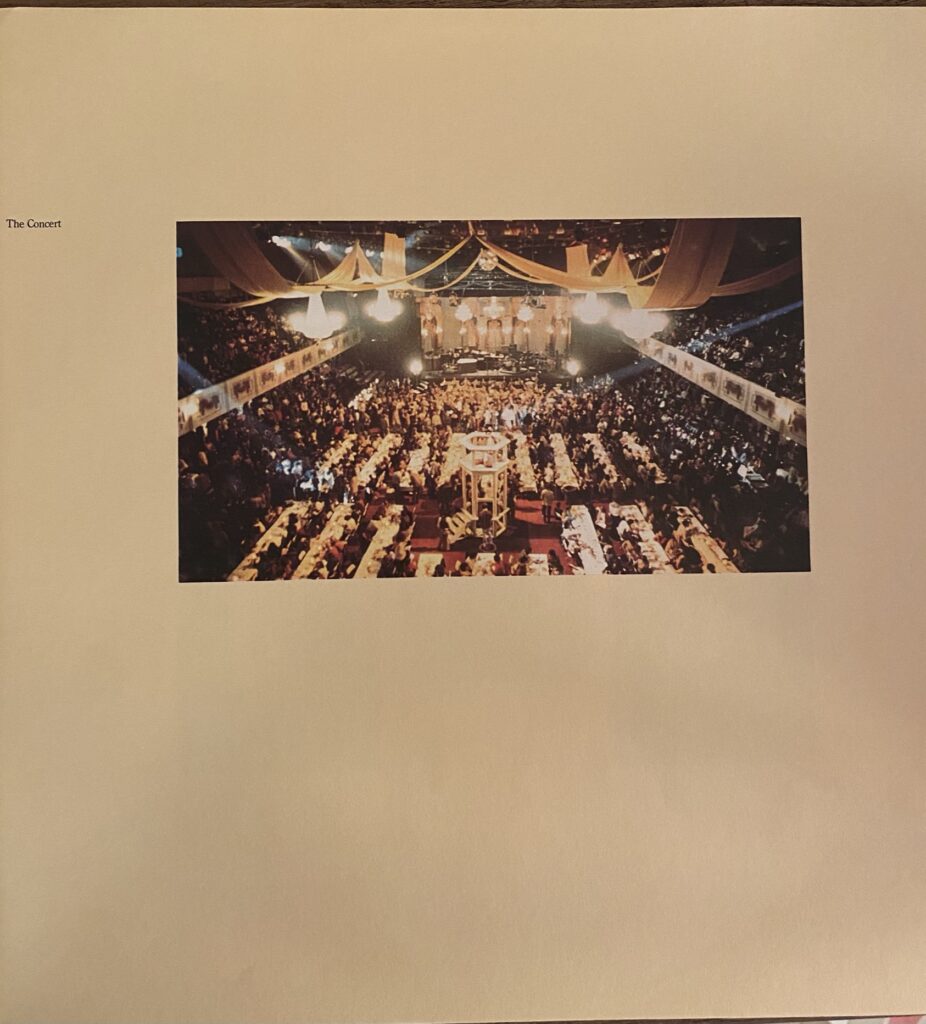 Happy Thanksgiving everyone, be safe, and play this one extra loud!