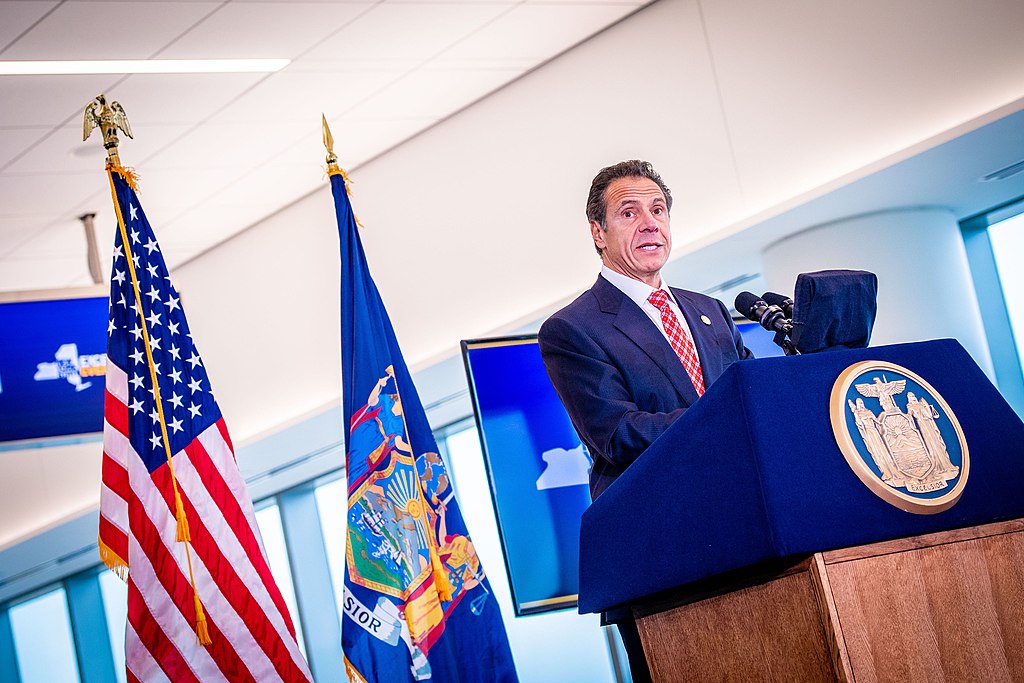 Photos from the opening of the new Delta Air Lines terminal in LaGuardia Airport in Queens, NY, on Tuesday, Oct. 29, 2019. Photo by Chris Rank for Rank Studios released by Delta News Hub via Wikimedia Commons.

While you were sleeping, a legal bomb went off in the ongoing debate over how far executive power can reach into daily life with COVID-19 restrictions, as the Supreme Court ruled 5-4 against New York Governor Andrew Cuomo’s restrictions on houses of worship.

New York Gov. Andrew Cuomo, a Democrat, issued the executive order at the center of both disputes in October. As part of the state’s effort to combat COVID-19, the executive order and an initiative that it implements identify clusters of COVID-19 cases and then take action to prevent the virus from spreading. An area immediately around a cluster is known as a “red” zone, where attendance at worship services is limited to 10 people. The area around a “red” zone is known as an “orange” zone; attendance at worship services there is limited to 25 people. “Yellow” zones surround “orange” zones; attendance there is limited to 50% of the building’s maximum capacity.

The diocese went to the Supreme Court on Nov. 12, asking the justices to block the attendance limits after the lower courts declined to do so. It told the Supreme Court that as a practical matter, the order “effectively bars in-person worship at affected churches – a ‘devastating’ and ‘spiritually harmful’ burden on the Catholic community.”

The synagogues followed on Nov. 16. They stressed that although they have complied with previous COVID-19 rules, the restrictions imposed by Cuomo’s order preclude them from conducting services for all of their congregants, and they argued that Cuomo’s order targeted Orthodox Jewish communities because other Orthodox Jews had not complied with the rules.

Cuomo pushed back last week, responding that the restrictions on attendance no longer apply to the churches and synagogues, which are in areas that are now designated as yellow zones. But in any event, Cuomo told the justices, the order isn’t focused on gatherings because they are religious, but because of the possibility that they could be “superspreader” events. If anything, Cuomo added, the order treats religious gatherings more favorably than secular events – such as plays and concerts – that involve similar risks.

In an unsigned opinion in the Catholic diocese case that also applies to the synagogues’ case, the five-member majority blocked the state from enforcing the attendance limits while the challengers continue to litigate the issue at the U.S. Court of Appeals for the 2nd Circuit and, if necessary, return to the Supreme Court for a final decision on the merits. The court explained that Cuomo’s order does not appear to be neutral, but instead “single[s] out houses of worship for especially harsh treatment.” For example, although a synagogue or a church in a red zone is limited to 10 people at a service, there are no limits on how many people a nearby “essential” business – which can include acupuncture or a camp ground – can admit.

Because the Cuomo order is not neutral, the court continued, it is subject to the most stringent constitutional test, known as strict scrutiny. It fails that test, the court concluded, because the order is too broad. There is no evidence that these synagogues and churches have contributed to outbreaks, and other, less restrictive rules could have been employed instead – such as basing the maximum attendance on the size of the facility. And if the restrictions are enforced, the court added, they will result in permanent harm to people who cannot attend and for whom a livestream of services is not an adequate substitute.

The court’s opinion in the two cases was released a few minutes before midnight on the night before Thanksgiving.

Justice Gorsuch in particular was blunt in his opinion:

Hard to tell if Gorsuch was aiming to troll Roberts or Cuomo harder in his concurrence. pic.twitter.com/yL4ICqeWSu